Modi’s Tryst with the ‘Stans

Modi’s Central Asia visit was a good start, but he will have to give it a sustained focus so that the region doesn’t end up being a Chinese backyard 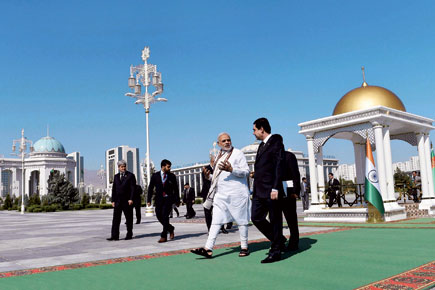 Though Prime Minister Narendra Modi was in Central Asia last week to enhance India’s linkages with a strategically critical region, it was his outreach to Pakistan that came to dominate the headlines. Indo-Pak ties took another of their usual twists when Modi and his Pakistani counterpart Nawaz Sharif met in Ufa, Russia, on the sidelines of the Shanghai Cooperation Organisation (SCO) summit. They issued a joint statement in which they ‘condemned terrorism in all its forms and agreed to cooperate with each other to eliminate the menace of terrorism from South Asia.’ It would have been an ordinary meeting but for the fact that the two leaders were meeting for the first time since May 2014 and their meeting came after increased border hostilities in the past few months and the backdrop of India having cancelled secretary- level talks last year. When Modi had held his first meeting with Sharif in Delhi soon after becoming India’s Prime Minister in May 2014, the two had decided to hold secretary- level talks, which were scheduled for August 2014. But those talks were cancelled by India after Pakistan’s engagement with Kashmiri separatists. So after more than ten months, the Modi Government’s decision to re-engage Pakistan has generated the usual hype of being a ‘gamechanger’ and a ‘breakthrough.’

The two sides agreed to hold a meeting of their top security advisers to discuss terrorism. But there were other steps as well, including meetings of the director generals of India’s Border Security Force and Pakistan Rangers to stabilise the border, release fishermen in each other’s custody, and set up a mechanism for facilitating religious tourism. Additionally, Modi accepted Sharif’s invitation to the South Asian regional summit that is going to be held in Islamabad next year. The trip will not only be Modi’s first visit to Pakistan after coming to power, but it would also be the first time an Indian leader would visit Pakistan since Atal Bihari Vajpayee in 2004.

Pakistan’s agreement to expedite the 2008 Mumbai terror attacks trial and no specific mention of Kashmir were viewed as a major diplomatic victory for India and a sign of changing mindsets in Pakistan. But the euphoria collapsed within hours when Pakistan went back on a number of its commitments. Sharif’s national security adviser made it clear that more information would be required to resume the trial of Zaki-ur Rehman Lakhvi, the mastermind of the 26/11 Mumbai attacks. Aziz also underscored that there could not be any dialogue with India unless the issue of Kashmir was on the agenda. This Indo-Pak deadlock is another reason why it is so important for India to expand its profile in regions such as Central Asia.

This is a time when major powers are competing for influence in the five Central Asian countries of Kazakhstan, Kyrgyzstan, Tajikistan, Turkmenistan and Uzbekistan. Russia has made its determination to restore some of its historic influence over its former Soviet empire clear. But it is China that is making a real splash in the region. Though Russia and China are planning to enhance their engagement in Central Asia and have decided to coordinate their policies in the region, Beijing’s economic transformation of the lands west of its restive Xinjiang province has gathered pace in the last decade, overhauling Russia as the main trade partner of four of the five Central Asian countries that gained independence from Moscow in 1991, as it splurges billions of dollars on roads and pipelines to link up the disjointed region.

Unlike China, which shares a border with Kazakhstan, Kyrgyzstan and Tajikistan, India’s transit to the region lies through Pakistan and Afghanistan, limiting New Delhi’s reach. Yet, India’s growing interests in Central Asia are well-recognised. There is a growing convergence between the US and Indian interests, especially their reluctance to see the region fall under the exclusive influence of Russia or China. India was worried in the 1990s when Russian influence in Central Asia weakened substantially with a commensurate rise in Chinese influence. This negatively impacted India’s threat perceptions, which stabilised only after the growing US presence in the region since 2001.

India’s ties with the region’s states are growing. India views itself as a stabiliser and security provider in the region, and with its growing economic clout, as an attractive economic power for regional states. India’s interest in securing reliable energy supplies and trade through Central Asia remains substantial. Besides oil and gas, energy-hungry India is eyeing imports of uranium from both Kazakhstan and Uzbekistan.

India has long wanted to play a larger role in the SCO and has been seeking support from individual member states for quite some time. However, New Delhi had not been successful in achieving an upgrade in its observer status. The organisation failed to achieve a consensus on India’s role in the grouping. India was admitted as an observer at the 2005 Astana Summit along with Iran and Pakistan. Though the 2010 Tashkent Summit lifted the moratorium on new membership, India’s role in the grouping has remained a marginal one. With Russian backing, however, India will now be joining the SCO next year.

Against that backdrop, Indian strategy has focused on developing strong bilateral partnerships in the broad region. With Uzbekistan, India has signed a pact on the import of over 2,000 tonnes of uranium, much like the deal India has with Kazakhstan. India is also exploring with Uzbekistan the possibility of extending the Friendship Railway Bridge to Herat in western Afghanistan. The requirements of energy security also postulate a continuing positive relationship with Moscow and friendly ties with all the Central Asian states. India must create firm ties among the energy exporting states of Central Asia, particularly Kazakhstan, Uzbekistan and if possible, Turkmenistan.

But India has so far failed to invest the diplomatic capital that the region demands. India tried to open an air facility in Ayni, Tajikistan, in 2002 to guard against growing instability in the region, though nothing much happened on that front for long. And in 2010, the Tajik government officially made it clear that Russia is the only country likely to use the airbase in the future. This happened despite India spending around $70 million between 2002 and 2010 to renovate the Ayni base and extending the Ayni runway to 3,200 metres as well as installing state- of-the-art navigational and air defence equipment there. In the meanwhile, China managed to win the competition for the Kashagan oilfield in Kazakhstan and the Dauletabad gas field in Turkmenistan. In contrast, the much-hyped Turkmenistan- Afghanistan-Pakistan-India (TAPI) gas pipeline, which is supposed to transport gas from Turkmenistan across Afghanistan and Pakistan to India, is yet to get off the ground.

With a strategic approach towards Central Asia, China has made significant headways in the region with $10 billion by way of grants and aid to SCO members and the development of regional linkages with its western region. China’s trade with the Central Asian region has crossed the $50 billion mark in 2013, whereas trade between Central Asia and India remains much below potential, struggling to hit $2 billion. India’s lack of a direct overland access to the region due to Pakistan’s reluctance in allowing Indian goods to pass through its territory has constrained India’s trade interests from growing in the Central Asian region, and consequently, trade with the region remains far below potential. India’s much touted International North- South Transport Corridor (INSTC), aimed at expanding India’s trade and investment links with Central Asia, remains a work in progress.

It is time New Delhi gives the region sustained attention it deserves. A single visit by Modi just won’t do in the face of the Chinese onslaught in the region. Otherwise, soon China will be able to claim the region as another of its backyards and India will have to struggle to make itself relevant despite its longstanding cultural links.