The Congress is simply playing the politics of distraction, and the RSS is its most convenient target 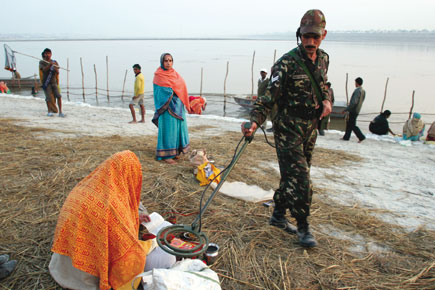 The Congress is simply playing the politics of distraction, and the RSS is its most convenient target


‘Hindu Terror’! The nomenclature is sheer profanity. The Congress party, it appears, is short of intelligence to find a word that would perfectly demean the RSS. And to target and attack the RSS, the party feels, is a dire necessity for its political survival.

To demonstrate that the RSS is a terrorist organisation, Home Minister P Chidambaram purposefully used the term ‘saffron terror’. But Congressmen themselves became wary; they realised that to so relate the colour saffron to terrorism would be counter-productive. Had Chidambaram known his party’s history, he would have thought twice before using the term. I remember a friend from Kerala telling me that AK Antony, our Defence Minister, had warned the party’s High Command, when he was Chief Minister of Kerala, about the repercussions of any blasphemous use of that word. Everybody knows the colour saffron is a symbol of renunciation and sacrifice. For more than two decades, this abusive usage was shunned. Chidambaram did not repeat it either.

My reading of the post-Independence history of the Congress party tells me that whenever the Congress finds itself in the doldrums, it thinks the RSS is the best bet for its recovery. In 1947, the Congress was at the receiving end for its sin of partitioning the motherland and the consequent massacre of Hindus, rampant dishonouring of Hindu women and displacement of millions of Hindus in Pakistan. The RSS was all praise for the valour and sacrifice of its workers in protecting those hapless people and offering great service to rehabilitate the uprooted. This made the Congress shaky. Even before the heinous murder of the Mahatma, a few leaders including Pt Jawaharlal Nehru had started talking about “crushing the RSS”. Govind Sahai, then parliamentary secretary in the UP government, had published a booklet titled something like Fascist or Nazi RSS and demanded a ban on the organisation. Digvijaya Singh, General Secretary of the Congress, is not being original in comparing the RSS with the Nazis and Hitler’s hatred of Jews with the RSS’s alleged hatred of Muslims; he is simply imitating Govind Sahai.

In 1948, the Congress got a golden opportunity to ban the RSS after the murder of the Mahatma. Mrs Indira Gandhi too had banned the RSS in 1975, after the promulgation of the infamous Emergency. She had no threat from the RSS; the RSS had not demanded her resignation. Those at the forefront of the anti-Indira agitation were rounded up on the night of 25-26 June, but the RSS was not banned at the time. The RSS Sarsangh-chalak was arrested on 30 June, and the ban came four days later at the instance of the CPI. Mrs Gandhi needed their support for her nefarious politics, and the CPI was willing to strengthen her hand.

The present Congress, under the leadership of the new Mrs Gandhi, needs a ban on the RSS—not to finish the RSS but to placate its Muslim vote bank. The Congress party has come to the conclusion that its very existence is in jeopardy. And only en bloc Muslim votes can enliven it. So, they have carefully calibrated a policy to target Hindus. And to do so, condemning the RSS is the easiest thing. Initially I had thought that Rahul Gandhi’s comparing of the RSS with SIMI was a silly outburst of an immature upstart, but after his conversation with the American ambassador—where he tried to absolve the well-known jihadi terrorist outfit Lashkar-e-Toiba (LeT), saying that more dangerous than the LeT are the radical Hindu terrorist groups—I am convinced that it is a calculated propaganda line. SIMI is banned in our country. The RSS is working in the open. Can there be a comparison between the two? If the RSS was so notorious, then Rahul’s Government ought to have banned it.

It is nobody’s view that there are no fringe terrorist groups among Hindus. But to compare their strength and capacity to inflict widespread terror with the LeT’s is fantastic nonsense. It is common knowledge that the LeT is a state-sponsored organisation. It is a creation of the Pakistan army. It is guided by the ISI. David Headley, the Pakistan spy now under arrest, has corroborated this. Which ‘Hindu’ terrorist group is sponsored and trained by the Indian Army? Does any Hindu group have the social backing or even sympathy of Hindus, as the LeT and other Muslim terrorist groups have of Muslims?

It is well known that Devendra Gupta, arrested on the charge of being instrumental in the Ajmer blast, was an RSS pracharak (full-timer). But what was his status in the RSS? He was a functionary at the district level. The Congress was in dire need of big fish, and they claim they have got one in Indresh Kumar, at present member of the RSS national executive. I have known Indresh Kumar for a long time, since he was provincial pracharak for J&K state. It is reported that Swami Asseemanand named him, and alleged that Indresh had given Rs 50,000 to prepare a bomb. As reported in the press, Asseemanand is repentant. When did he assume this new ‘avatar’? In CBI custody?  Was he tortured to become so remorseful? But who can confirm this? If Swamiji felt any penitence for his alleged sin of engaging in terrorist acts, he should have surrendered even earlier. He would not have gone absconding. The police apprehended him only after months of pursuit. Nobody will believe he is regretful even if his confessions are voluntary. My suspicion is that the whole confession is concocted. It is hard to believe that Indresh had a hand in the attacks on Muslim religious places; he is a guiding spirit behind the formation and working of the Nationalist Muslim Forum. Will any sensible person harm his own cause? Even then, presuming that he is involved in these alleged unlawful acts, the Government should arrest and prosecute him. People had heard of Indresh’s alleged participation for months, but he was not even interrogated.

What stops the Government from arresting and prosecuting him? My hunch is that the Government will think twice before taking any rash action. It appears the Congress is only interested in keeping the propaganda-pot boiling, telling people that the RSS is a terrorist organisation. This appears to be the sole purpose of the selective leaks. It is also possible that the Government wants some time to take a firm decision on banning the RSS. If the ban does come, it will be India’s fourth on the organisation. People have seen the effects of the three earlier bans. The motive and method is the same. Paint the RSS as a terrorist outfit, put its leaders in jail under preventive laws, and humiliate and disgrace the organisation. But this is 2011, not 1948, nor 1975.

Everybody knows of the role of HKL Bhagat, Jagdish Tytler and Sajjan Kumar in the massacre of Sikhs in 1984. They were important  functionaries of the Congress. One of them is dead. Tytler was put in charge of the 2010 Bihar Assembly election but pulled back after an uproar, and Sajjan Kumar is facing trial. Can we, then, claim the Congress party is a terrorist organisation? How, then, can one Devendra Gupta or one Indresh make RSS a terrorist organisation?

One more difference between the groups accused of involvement in the Malegaon/ Ajmer/ Hyderabad blasts and Muslim jihadi terrorist groups should be noted. The former are reactions, reactions to the sinister actions of these jihadi groups. To hide and suppress the actions and trumpet only the reactions is neither fair nor convincing. Some higher-up RSS functionaries were also interrogated. Months have passed and nobody has been chargesheeted. So, targeting the RSS appears to be just a calculated propaganda ploy to win back the Muslim vote bank which slipped away from the Congress after the Babri demolition. To convince this vote bank, the Congress has coined the term ‘Hindu terror’. It is not only a misnomer, but also highly insulting, insulting in a way to the whole nation. The Congress, it appears, has now become conscious of the adverse repercussions of this hateful terminology and has mended its language. Now, officially, they say terrorism has no colour. They are now talking of majority and minority terrorism. But this quibbling is not going to help the Congress. Unless it sets its house in order, unless it clears its stables and removes the repellent stench of corruption, it has no future. Muslims as well as Hindus are wise enough to know the reality of the Congress game.