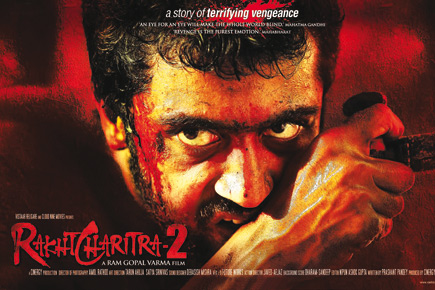 
Why does the muse desert a director? I pondered this as I took in Rakht Charitra 2, the latest offering by Ram Gopal Varma.  The film, loosely based on the life of an Andhra Pradesh politician, Paritala Ravi, is a high-decibel, heavy-handed, mind-numbing exploration of revenge and violence.  It has stray moments of power but a tired narrative.  It isn’t the worst of Varma—that would be the epic turkey Ram Gopal Varma Ki Aag or perhaps the moronic horror Agyaat—but it doesn’t come anywhere close to his best either: Company, Satya and perhaps Rangeela.

I still recall watching Rangeela in 1995.  Bollywood then was a world in transition.  The old order was scrambling for relevance, and the new players—Aditya Chopra and Karan Johar—hadn’t arrived yet. Varma had already made waves with Shiva and Raat, but nothing prepared us for this hyper-stylish, MTV-inspired saga of aspiring heroine Mili, played by the impossibly curvaceous Urmila Matondkar. Aamir Khan was terrific as the tapori Munna, and even Gulshan Grover had his moment as Steven Kapoor, the perfectionist Bollywood director who, after a lashing by his heroine’s mother, mournfully asks: ‘Hollywood mein Julia Roberts ki ma Spielberg ko aisa bol sakti hai kya?”  Before the private screening started, distributor Shyam Shroff told me that the film was going to be huge.  I immediately understood why. Rangeela felt new and exciting. It had an ineffable sense of cool.

In 1998 (notably the same year as Johar’s Kuch Kuch Hota Hai), the visceral, violent underworld drama Satya cemented Varma’s reputation as Hindi cinema’s most cutting-edge director.  What happened next was curious and baffling.  Varma became a factory and released dozens of films, good, bad and many ugly. His reputation stumbled, and then utterly collapsed with Ram Gopal Varma Ki Aag in 2007.  In an unusually introspective interview with Hindustan Times, Varma acknowledged that “Aag was a not even a wake-up call.  It was a slap.” And yet the slap did not staunch the loss of quality in Varma’s work.  Films that followed include the imminently forgettable Phoonk and Agyaat.

In Hollywood, M Night Shyamalan has had a similar fall from grace.  In 2002, he was on the cover of Newsweek, being labelled the next Steven Spielberg.  By 2010, he was making news for creating one of the worst reviewed films of the year—The Last Airbender, which critic Roger Ebert described as being ‘an agonising experience in every category I can think of and others still waiting to be invented.’  In July, The New York Times columnist Ross Douthat wrote a blog post titled, ‘The Persistence of M. Night Shyamalan’, in which he pleaded with America and the world to ‘stop enabling Shyamalan!’  He said: ‘As long as people keep buying tickets for his movies, he can swaddle himself in the delusion that he hasn’t lost his touch and that it’s critics who’ve lost theirs.’

The most talented directors have bad movie days. So Francis Ford Coppola makes Jack or George Lucas produces Howard The Duck or Steven Spielberg fails with Hook. Closer home, Ramesh Sippy made Shaan after Sholay and Mehboob Khan did Son of India after Mother India.  But in some cases, the faltering becomes chronic.  Talented filmmakers such as Varma and Shyamalan seem suddenly rendered incapable of telling a good story.  Why?  Is it hubris?  Is it a failure of imagination or a failure of intent?  What makes creative myopia seep in so thoroughly that they can no longer find their way?

In a recent interview, I asked Mira Nair, that after 20 films and 31 years, what did she most look forward to as a director.  Her reply: inspiration.  Making movies is a hellishly tough job.  Clearly, making them without a muse is even more so.