×
Modi in America: A Letter to the PM

Make a Joke, and don’t forget to Chuckle

A strange aspect of the Obama case is that unlike most pop stars who have fallen off the charts, he doesn’t seem to be anxiously plotting a comeback 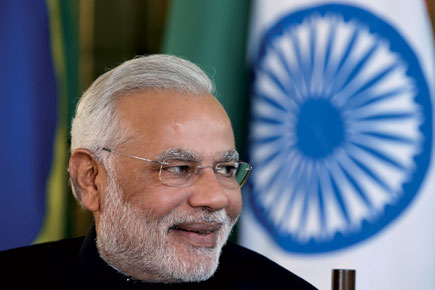 A strange aspect of the Obama case is that unlike most pop stars who have fallen off the charts, he doesn’t seem to be anxiously plotting a comeback

Please excuse the familiarity, sir – we thought that in light of your upcoming visit to the US, we should try to reacquaint you with American manners, which as you may remember from your last visit generally range from the informal to the disrespectful. You’ll find even quite senior people are frequently addressed by first names or nicknames. Just ask Hillary.

On the bright side, this lack of concern for propriety does have its benefits. For instance, the same officials who wouldn’t give you a visa for nearly a decade because they considered you a genocidal monster concluded after your election this spring that you’re actually a statesman of great ability and a man of immense charm.

You will undoubtedly note this flexibility during your meeting with the former Secretary of State. Whatever her qualms while in office, she told NDTV earlier this year that, “it’s in the past”, implying that it’s not her department in any case, and suggested he raise any “lingering” concerns about the matter with President Obama.

With 50 events in 100 hours, most of this trip is likely to be a blur, but three events are actually likely to leave an impression.

The first is your appearance at the United Nations. Don’t worry too much about this one. It’s the podium that matters. It’s not true that the delegates are CGI projections, like the people in video games, but as you’ll be speaking in Hindi, we can hand out a text for the reporters and you can say anything you like for the folks back home. We think your stump speech will do nicely.

The second important engagement is your sold-out speech to 18,000 fans at Madison Square Garden—an intimate setting by Indian standards but one that promises to be a major media event in the US.

The Garden, like so many things in America, is not quite what it seems: It is nowhere near Madison Square. Nor is it a garden. Nor is it square. In fact, it’s a big round building where they play basketball games and hockey, and occasionally box, perhaps best known for being what the singer Billy Joel has called “the iconic, holy temple of Rock and Roll for most touring acts”.

Elvis Presley played the Garden. So did Michael Jackson. Muhammad Ali fought there. But filling 18,000 seats when you can’t sing, moonwalk, or throw a strong right jab is an accomplishment. No American politician could do it right now unless the promoter gave away rotten vegetables at the door.

The warm-up acts that precede you will include Nina Davuluri, Miss America of 2014, and the first Miss America of Indian descent, singers Anjali Ranadive and Kavita Subramaniam, violinist L Subramaniam, a laser light show, a collection of holograms of historic Indian luminaries, and folk dancing.

The other stars of the evening will undoubtedly be the crowd. Indian Americans have done fantastically well, by and large. Whatever caste their families belonged to back home, chances are good they’re at the top of the heap in the USA: household NRI income is $65,000 a year, over 30 per cent more than the $49,000 the average American family takes home, according to a 2012 report by the Pew Research Center. And that may be a low-ball figure: some researchers estimate that Mr and Mrs Desi actually bring home $100,000.

One measure of their growing influence is that although Indian culture is not as integrated into the American scene as it is in the British, it’s getting there. Ms Davuluri’s Bollywood-style dance routine probably couldn’t earn her a place on a Mumbai soundstage, but its novelty made it a hit in the pageant; Indian faces are now common on TV and in the board room; and Indian food is rapidly becoming as American as pizza, tacos, and sushi.

But rest assured that the focus, chief, will be on you. The reporters here are already describing you as a rock star, and noting that the last politician who could pack in crowds like this—in a foreign country and without soldiers at their back—was Barack Obama on his first European tour.

That was then. US politics are unusually dysfunctional right now: the 2011-2012 Congress passed only 110 substantive bills—the lowest number in a century. Between the lack of Congressional popularity and lack of Obama’s personal popularity, the government seems to be going nowhere fast.

Our only advice for your party is: enjoy it. This kind of honeymoon tends not to last. Expectations were pitched as high for President Obama at his first inauguration six years ago as yours are now, and that kind of support tends to burn quickly, like the first stage of a rocket— immensely powerful, but good for just the first few minutes, and you had better have reached orbit before it sputters out.

The Obama you’ll meet on 29 and 30 September is a much sadder character than the promising young senator of six years ago. His approval rates are middling, in the upper 30s and lower 40s, but Congress is so resistant to them that most of his proposals go nowhere these days. Nor does he inspire the crowds the way he used to: at a nuclear security summit in The Hague last March, only one person in the audience clapped when he left the podium. He used to say that he was a blank screen on which people projected their hopes. These days, however, they mostly see a blank screen.

One strange aspect of the Obama case is that unlike most pop stars who have fallen off the charts, he doesn’t seem to be anxiously plotting a comeback. Instead, he looks more like a prisoner who has two years to serve. In the Hague video, he looks positively ashen, and mumbles his way through remarks to which neither he nor his audience seemed to be listening.

As you will see when you visit him, a powerful office takes its toll, especially if you’re the nominal leader of a rowdy country that is not especially interested in being led.

Besides living with constant disappointment and rejection, you’re also more or less living under lock and key, and that does things to you. Norman Mailer argued that Bill Clinton’s affair with Monica Lewinsky was more or less caused by the pressure of living in a place where people check up on you every 15 minutes. “And if you feel you’re in prison, you try to do something about it. Most people naturally, viscerally, react to being in prison. And the form it takes almost always is to break the rules,” Mailer speculated.

Clinton had Monica. Kennedy had a harem. Nixon had his paranoia and his drinking problem. For Obama, a disciplined, natural introvert, the rebellion may have taken a different form. Where some might throw themselves further into the permanent campaign, as Clinton did when he wasn’t womanising, or hide away in the country, as George W liked to do—he spent more than 400 days of his presidency on his ranch in Texas—Obama has drifted off.

In his profile of Obama in Vanity Fair, the writer Michael Lewis asked him what he would do if he had a day where he could do whatever he wanted, and he gave a long answer describing a drive to a beach in Hawaii and a long swim, all by himself, that sounds a little like Hemingway in the tropics:

‘And you spend an hour out there. And if you’ve had a good day you’ve caught six or seven good waves and six or seven not so good waves. And you go back to your car. With a soda or a can of juice. And you sit. And you can watch the sun go down…’

During your private dinner with the President, we suggest you mention this, and ask him if he would like a chance to have a few days like that, to give himself time to loaf or think deep thoughts about the future of the country. Then you offer the following talking points:

– India already runs the back office of many American corporations. They’re doing a fantastic job, making companies much more efficient and allowing them to focus on their core competencies.

– A number of Indian-Americans have already demonstrated great administrative ability as heads of corporations, hospitals, and universities.

– You (PM) love politics, and you’re good at it. You’re highly experienced too: you brought growth to Gujarat, which has roughly the population of France.

– So why not let Modi Consulting Services handle all this messy political business you don’t like? We have the capacity: the US is only 50 per cent larger than Uttar Pradesh; it’s practically just one more province for MCS.

– Ask for a test assignment. Make a joke about knowing how to handle Congress. (Don’t forget to chuckle, the way we’ve been practising.)

Of course, this will be coming at the end of a long day and might not actually register with Mr Obama, who may be looking out the window toward the Washington Monument, thinking about those big blue waves.

If that happens, just call us on your mobile on your way back to the hotel and give us your pitch. Someone will be sure to take it all down, and this time, the proposal is likely to reach a decision-maker.