Where history flows through the Mayyazhi river 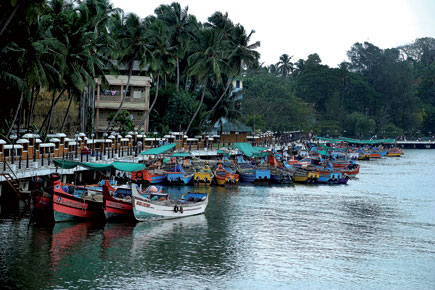 Mahe is an idyllic town off the Malabar Coast, trapped between the surging romance of yore and the sombre realities of the present. This tiny town, with a population of only 42,000, is dotted with 64 liquor vendors and bars, displaying thousands of bottles of whisky, brandy, rum, gin, beer and wine; a legacy handed down by the French, who once ruled the region. Mahe, also known as Mayyazhi, is surrounded on two sides by the Mayyazhi river on one and by the Arabian Sea on the other. Though geographically located in Kerala, the town is politically and administratively part of Puducherry, a Union Territory elbowing Tamil Nadu.

When the French Governor Bertrand-François Mahé de La Bourdonnais captured Mahe from the Marathas in 1741, it was only a cluster of picturesque hills overlooking the Mayyazhi river and the Arabian Sea. A few hundred inhabitants, who lived at the foot of the hills, cultivated rice and grew pepper, coconut and areca (betel) nuts. The majority of the population belonged to the ‘low caste’ Thiyya community. The women were bare-breasted. They ate steamed rice with spicy fish curry and worshipped numerous local deities, the fiercest of them being Kuttichathan, who abhorred Brahmins. But their destinies and livelihoods soon changed once the French took over.

Legend has it that the French paid a paltry sum of Rs 16,000 to the Vazhunnor—Raja of Badagara. In return, they were given charge of Mahe; its lush green hills, the river, the coconut trees and all its inhabitants. It was a lucrative deal for such a small amount.

The French, who constantly fought wars with the British on the seas, were in need of a base in south-western India. Mahe, much to their relief, provided them with this foothold. Mahe offered plenty of pepper, ginger, cinnamon and other spices. They grabbed these and ferried them to France. During this time, their real seat of power remained Puducherry, where they fought the British sporadically. The Bay of Bengal was often ravaged by these skirmishes. But the Arabian Sea, off Mahe, stayed relatively calm. This was because colonising Mahe turned out to be a tame affair. At first, the French constructed small forts on the hills, baptising them as Forte Conde, Forte Saint Georges and Forte Duffein. They then built roads, bungalows, warehouses and a Carmelite church. An idol of St Theresa of Avila, brought in from Spain on a ship, was later installed in the church. They also formed an army of a hundred Thiyya soldiers, two French officers, a drummer and 40 rifles. But most importantly, they put in place at the pier a statue of Marianne, the ‘spirit of France’. The script for Mahe’s new destiny, perfectly drafted, was now ready for action.

The majority of Mahe’s population was Hindu, while a large chunk of it was Muslim, and the rest, Christian. Before the advent of the French, the Thiyya had led something of a primitive way of life. The French helped them shed their backwardness, educated them and offered them jobs. Eventually, in place of semi-naked Thiyya who laboured in rice-fields and tapped toddy, a new Thiyya class emerged—doctors and teachers educated in France who walked around the town with berets perched on their heads. The women were no less fashionable. Theirs was a telluric beauty that must have broken the heart of many a chivalrous Frenchman. In their amorous fantasies, the Mayyazhi river merged with the Seine. Surprisingly, unlike in their other colonies, in Mahe the colonisers and the colonised led a perfectly conjugal life together.

Mahe has always been known for its strong secular beliefs. There are legends that remain central to its cultural identity even today. The most popular ones are the tales of Tholan, a chieftain of the Thiyya community who turned into a deity at the Shrine of Theyyams in Puthalam, Tamil Nadu. Another tale recounts how the Church of Mahe came into existence. Saint Theresa’s idol was being transported on a ship from Spain to an unknown destination. When the steamer arrived in the vicinity of Mahe, it came to a halt on the high seas and refused to budge in spite of the captain’s efforts. It was St Theresa herself who threw in invisible anchors and halted the ship. She wanted to be enshrined at Mahe. Subsequently, local peoplebuilt a modest church with a thatched roof, where she remains to this day. While the French set foot in Mahe to trade spices, St Theresa migrated to the land seeking the love of the natives. And she received plenty of it, for she is revered by Christians, Hindus and Muslims alike.

The town is also known for its political avant-garde. In the early 40s, a young man from Mahe, Michilotte Madhavan, went to Paris for higher studies at the Sorbonne University. Madhavan soon joined the French Communist Party and took part in the resistance movement against the Nazis under Jean- Paul Sartre when France came under German occupation. The Nazis captured the bespectacled young man, tortured him in jail and then shot him dead on 2 October 1943. He is an unsung hero back home, but in France his name is inscribed on a memorial.

In 1954, the French handed over the reins of power to a local government led by IK Kumaran Master. This was the culmination of a long struggle spearheaded by the Mahajana Sabha, a party founded for the purpose of Mahe’s liberation. The struggle turned violent at times, but in general it was a meek affair. Even after the British had left India, the French had sought to hold on to Mahe. Interestingly, it was the town’s geographical disposition that eventually helped its freedom movement. As Mahe is surrounded by a river and the sea, it is connected with the outside world only by a single road. Mahe’s freedom fighters—banished from the town—blocked the road from the Kerala side. No one was allowed to enter or leave the town. Bullock carts taking rice to Mahe were turned back, cutting off a vital supply line. In a few days’ time, no grains and oil were left. The French had no choice but to yield and agree to depart. And they did. Thus, Mahe’s lyrical past—colonialism can get lyrical at times—too came to an end.

As the French were leaving, hundreds of natives gathered at the seashore to bid adieu. When the ship drifted away towards the horizon, many wept. That is something the French could be proud of, as no Indian ever shed a drop of tear for the British when they left. For most of us, the very word ‘colonialism’ is anathema, if not offending. But thanks to the presence of the French for over 200 years, today Mahe has a place of its own in the decolonised country. The contribution of the French in terms of education and professional opportunities in France as well as exposure to a modern civilisation helped locals develop Mahe—both economically and culturally.

Even today, the town is home to people who speak French. The statue of Marianne still remains at the pier, frozen in time. St Theresa’s annual church festival is the biggest of the region, and it attracts thousands of devotees each year.

Over time, the colonial bungalows disappeared one by one. What you see today is an array of large concrete houses that line the banks of the Mayyazhi river. The river that has been a witness to two centuries of history is now left teeming with filth. Being a Union Territory, liquor, petrol and construction material cost much less here than in adjoining Kerala. Roads stand clogged with liquor shops, petrol pumps and construction material depots. Even housemaids often smuggle bottles of liquor into Kerala, just across the bridge, where these fetch a higher price.

The conflict between the colonial past and the liberated present, between the veil of romance and swathes of stark realism weighs heavily upon the local population. In a short period from now, memories of the colonial past with its dreams and fantasies will give way to a new way of life—a life to be lived much more realistically and practically.

M Mukundan
M Mukundan is a Malayalam novelist and a native of Mahe. His books include By the Banks of River Mayyazhi