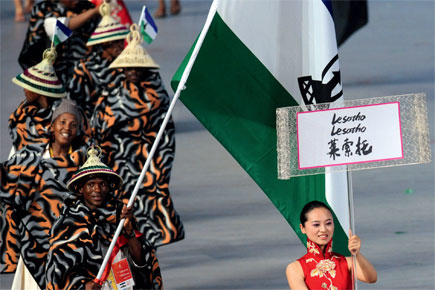 
It appears that it is mandatory for the opening ceremony of the summer Olympics to let hundreds of adults with no recognised psychiatric problems run in costumes across a massive field and make geometric formations as large incomprehensible objects hover above them. There is a theme at the heart of it all, even a historical story perhaps, that not many fully understand. At some point, there will be fireworks against the night sky. Tamil film directors used to show such exploding rockets to signify orgasm (female, suspiciously), a happy consequence of the previous scene where two protagonists in bed had approached each other with quivering lips. But mature people know that fireworks in midair actually signify the celebration of life, particularly human life.

All this, the abstract dances and the fireworks, will occur in a few days when the London Games begin. And, an old person will surely talk about ‘the Olympic spirit’, which means absolutely nothing, of course. Journalists will declare that the opening ceremony was ‘spectacular’, and that the London Olympics is the biggest in its history, featuring the largest ever number of athletes and sports events.

A majority of these events are seen only at the Olympics and at one or two diminished versions of the Games. One of the events, in fact, is called Eventing.

Olympic officials say it is with great care that they decide what sports are included. They face immense pressures from various federations of truly obscure sports, and the only factor that influences the Olympic officials is, according to them, “appeal”. Yet, our Olympic memories are filled with soporific images—of two masked genderless figures on leashes trying to poke each other, of sail boats going somewhere, of wrestlers lying still on the floor in a tight embrace as if they are in a relationship, of people in a pool passing a ball.

But it is true, there are moments at the Games that show the human body as a form of genius, and there are feats that stun us even in sports we do not fully comprehend. But largely, the Olympics are a poor spectacle framed by the sometimes petty, sometimes dangerous idea—nationalism. Why must a child jumping on a trampoline trying to prove that she can do it better than any other person in the world bring immense pride to a whole nation? But somehow she does.

Most Indians have never seen Abhinav Bindra or Mary Kom, or Saina Nehwal for that matter, do what they are best at, or even understand their sports or why they are great. But the entire nation hopes they win. Olympic glory is essentially the hallucination of ordinary people who think they have been made to look better by the feats of some extraordinary people.

It is the same illusion that has caused outrage in India after the apparent discovery of the Higgs Boson, an elementary particle predicted by the British theoretical physicist, Peter Higgs. Most Indians had not heard of Satyendra Bose before the Higgs particle brought him back from oblivion, or what exactly he did, yet they lamented that the world had much praise for Higgs but not for Bose. The fact is that the world, through the British theoretical physicist, Paul Dirac, had honoured Bose long ago by naming an entire class of elementary particles—bosons—after Bose. It must be a matter of great national relief that the name of the eminent Indian scientist was Satyendra Bose and not Satyendra More.

Why are Indians proud of him now? Because the achievement of Bose makes all Indians look good? Because India was responsible for his achievement? It is unlikely that any intelligent person can believe that. Nationalism, especially the nationalism of a poor country, does not stand the test of probing questions over its very meaning. Yet it is hard to deny that it exists as a severe emotion in most people. The same nationalism will be entirely responsible for the very real possibility that in the coming days, as Roger Federer plays in the line of beauty at the Olympics, his Indians fans will be denied some of his matches as the broadcaster will presume that most Indians would like to instead watch those third-rate events called mixed doubles and doubles because some mediocre, aged Indian tennis players will be in contention.

True lovers of sports, as is the case with true lovers of every other human pursuit, are often impoverished by the imbecilities of nationalism. But the fact is that nationalism in sports is the least dangerous quality of nationalism. Normally, it kills. As Voltaire said, “It is lamentable that to be a good patriot one must become the enemy of the rest of mankind.”