Lessons from the Dugout

Many business leaders would give an arm and a leg to possess some of the skills demonstrated by team skippers at the IPL. 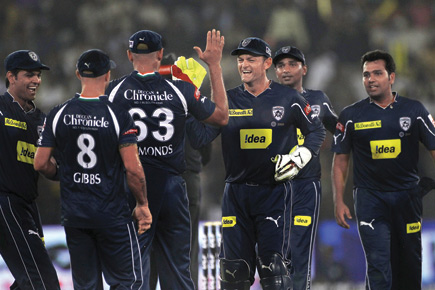 Many business leaders would give an arm and a leg to possess some of the skills demonstrated by skippers at the IPL.


Many business leaders would give an arm and a leg to possess some of the skills demonstrated by skippers at the IPL.

This year’s Indian Premier League (IPL) edition, apart from a number of fascinating contests, has seen some of the finest leadership attributes on display, skills that any business leader would be proud to possess. Cliched though it now sounds, Shane Warne, captain of Rajasthan Royals, is now popularly known as the finest captain Australia never had, simply by virtue of the sheer heart and grace he has demonstrated as leader in this and earlier editions of the IPL. Of course, he is not alone. If the demanding T20 format can be likened to a challenging business environment, then some of the captains leading this edition of the IPL can be said to have attributes many of the finest business leaders would die to be known for.

»Strategic thinking: Whether it is shuffling the bowling attack to surprise the opposition, making sudden changes in the batting order, or field placements, the IPL captains have often demonstrated the power of strategic thinking so essential for a leader in challenging circumstances. The element of surprise, critical to challenge a powerful rival and for successful strategy, has been in ample evidence at the IPL, whether it is by Warne (asking Yusuf Pathan to open the bowling in the match against the Chennai Super Kings) or by other captains. Sourav Ganguly, the Kolkata Knight Riders skipper, despite failing with the bat at times, has demonstrated an ability to rotate his bowlers to keep the opposition’s run-rate in check. Many of these leaders get full marks for being able to think on their feet, make speedy changes in strategy as the situation demands, and execute them with clockwork precision. When Pathan got the wicket of the mighty Hayden as a result of Warne’s decision to open the bowling with him, it was proof enough that a leader who takes calculated risks, wins.

»Leading from the front: A good leader does not hesitate to take the first step. There are very few places where this is more in evidence than in cricket. The best leaders at this year’s IPL have shown the courage and grit to take that critical first step. So whether it is Ganguly opening the batting himself and taking on the responsibility of setting up a big total against Kings XI Punjab, or the iconic Sachin Tendulkar decimating the opposition by showing them what batting is all about, or even that other amazing leader Adam Gilchrist of the Deccan Chargers throwing himself at every ball behind the stumps even at 40, these leaders have put themselves and their reputations on the firing line in the interest of their teams. And more often than not, the results have vindicated their actions.

»Communicating with the team: The best leaders are always in communication with their team members, egging them on to do better, innovate, push the envelope and raise the bar. And even if the team members fail sometimes—as they will—the best leaders are always there for that encouraging pat on the back, that word of advice which gets the team member raring to give it another shot. It is not surprising, then, to see the likes of Gilchrist, Warne, Tendulkar, Ganguly, Anil Kumble or Mahendra Singh Dhoni come up to their bowlers and pep them up even when they were getting battered out of the park. And more often than not, the young and inexperienced bowlers listened intently to their leaders, carried out the strategic changes suggested by them, and reaped the benefits. And the captains unfailingly rushed to congratulate them, that big warm smile and pat on the back doing for them what no amount of monetary incentive can ever do.

»Recognising the performers: This has been a constant attribute of the best leaders at the IPL: they have never failed to mention by name those who have done the job for them. So, even the youngest and newest member of Warne’s pack will get a mention when the leader makes his winning speech. Ditto for the likes of Sachin, Gilchrist or Kumble. What that does to the morale of the youngsters is anybody’s guess.

In today’s fiercely competitive, IPL-like business environment, business leaders and members of top management teams will have to follow these basic principles from the cricket field to ensure that their teams win. And it is perhaps no coincidence that some of the best leaders at the IPL are also the most experienced.