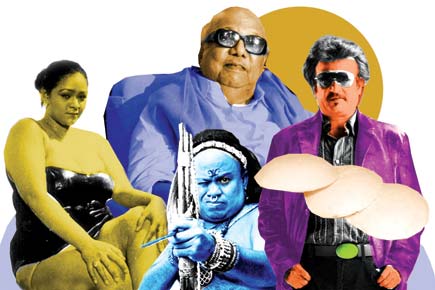 
Even in the face of the most severe space crunch in the headline slot, The Hindu would never call Manmohan ‘Mohan’. In the Chennai newsroom of that paper, where there are men with pony tails and they represent the Vedic age and not current fashion, calling the PM ‘Mohan’ would be as absurd as calling Karunanidhi ‘Karuna’. Which the national newspapers, mentally stranded in Delhi, did in the aftermath of the elections, when the Tamil Nadu Chief Minister created enough tumult to be on the front page for a few days. The Hindu knows that abbreviating a man’s name changes his very meaning. In fact, if the DMK chief were sitting inside a Barista and the girl behind the counter yelled out, “Karuna, Karuna”, he would not budge from his wheelchair. Anyway, that cappuccino is piss compared to real Madras Filter.

It must have caused some anxiety to Delhi’s news desks, this arrival of Karunanidhi on what is called the centre stage, and of his interminable family, some of whom appear to have been named after typos. Television anchors have to suddenly learn how to pronounce his daughter’s name, Kanimozhi. And fail. For, ‘zh’ is not what it seems. That unparalleled sound is generally beyond the capabilities of the Aryan progeny. The tip of your tongue has to go up and touch the upper palate, and then your brain will ask you, ‘Are you a Dravidian?’ In fact, considering the rising impact of what is called the South, news channels should invent newer qualifications to find their ideal anchors. Apart from having a symmetric face, they should now be able to pronounce Kanimozhi, Kazhagam and Thiruvananthapuram. And vazhapazham (Banana. Just felt like adding it to the list). Also, it is time North Indians learnt how to pronounce some centre stage words correctly. Tamil is pronounced Thumil, or if you are ambitious, Thumizh. And, accept that Chidambaram’s Union Budget advisor, Thiruvalluvar, is always spelt with an H.

It is also time North Indians realised that all of us down there in the South are not the same. There are four states and we have derogatory names for each other. And it is not true that we like large women. And, come on, thighs do not thunder. Only thunder thunders. Nor do we have any proven fondness for women with moustaches, or hair on their legs. And, Tamilians do not say, ‘mind it’. And in Kerala, they do not talk in Malayalee. They talk crap. In Malayalam. And yes, we know Malayalam is a palindrome. Don’t bring it up again. And, we don’t use anymore hair oil than you. And we don’t say ‘ayyo’. And, most important, Sholay is not the best film ever. It is Nayagan. But it is true, as any Malayalee will admit readily, that one of the dialects in Tamil Nadu is hysteria.

The time is also right to end the undeserved linguistic colonisation of the North in English prose. As the best readers of good English live in the South, editors may consider avoiding these terrible, ugly words whose meaning we do not care to know—thepla, jugaad and pakora (before every monsoon, you can see this word used in mindless articles about how you must “curl up in bed with a good book and garam pakoras). All Hindi words used in English newspapers and magazines must be explained in English in brackets.

It is unfortunate that P Chidambaram has retained the Home portfolio. As a result, Thiruvalluvar, the legendary Tamil poet, may sadly never be quoted in future Union budgets. Pranab Mukherjee will never do it (Bengalis quote only Bengalis). Some of you may have wondered why Chidambaram ever bothered to quote Thiruvalluvar, whose messages always seemed so unremarkable—“The world is his who does his job with compassion.” Where is the intellectual depth in a statement like that, where is the beauty? It is like someone quoting Plato as saying, “Drink water every day.” But the point is that because of Chidambaram, you now know Thiruvalluvar. And that he is a Tamil poet (a North Indian saboteur, though, has mentioned in Thiruvalluvar’s Wikipedia entry that he was probably a Jain).

In the middle of all this, the ascent of the South, the education of the North, and other things, it must be said that the objection that some South Indians have to the usage ‘South Indians’ is a bit of an overreaction. They claim there is no such thing called South India, that it is a myth created by North Indians. That’s not true. There is no equator. But there is South India.