Just Move on, for Sach Is Life

If he does not retire after his 200th Test, Tendulkar is in for a hard time 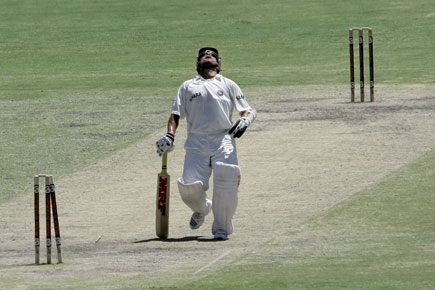 If he does not retire after his 200th Test, Tendulkar is in for a hard time


Over the course of the last week, both Bishan Singh Bedi and Sourav Ganguly backed the idea that Sachin Tendulkar’s 200th Test be played in Mumbai on his home ground. The question of his retirement, they said, should be left to him. That both these opinions should be voiced in the same breath indicates how linked they are in the public imagination.

In honour of Tendulkar’s contributions, the Board of Control for Cricket in India (BCCI) has reportedly shuffled around the cricketing schedule by inserting a West Indies tour in November, just so that he can play his 200th Test in India. The Indian team was otherwise headed to play in South Africa. Some reports say the BCCI will give Tendulkar the option of choosing between Eden Gardens and Wankhede. The only way to justify it is if Tendulkar retires after that. Otherwise, there seems to be really no sense to this kind of babysitting.

This overwhelming patronising of Tendulkar marks yet another moment in the longest farewell party that any Indian sportsperson has got. So far it had been an in-house affair. Like Tendulkar getting to choose which ODI series he wanted to go for and his 100th century having to come against Bangladesh, which was a letdown. But now other cricketing nations are being dragged into it. The South Africans, though all admiration for Tendulkar, will have a few sour notes going through their head at this unilateral tweaking of plans.

And then there is the uncomfortable question of what if Tendulkar does not retire after the 200th Test. From his statements, he still seems ambivalent. He is barely managing to survive in the team based on performance and if this was how he fared in the beginning of his career, questions would have started going through the minds of selectors.

Tendulkar’s last century was 22 Tests and two and a half years ago. His batting average in 2012 was 23.8 and this year it is 32. He has had bad runs before, but he was not 40 then. Everyone, including Tendulkar, knows his time is over. He is today like the afterglow of a comet which has been gone for some time and everyone tolerates a hangover only because they know it is temporary. The kindness shown to ‘old’ people in sports keeps decreasing with time until their loneliness equals the remnants of their superstardom.

Why doesn’t Tendulkar just go? Why doesn’t Roger Federer just go instead of getting defeated by a 116th seed in the second round of Wimbledon of all tournaments? Why didn’t Steve Waugh go until the Australian cricket board literally showed him the door? Because of the most elementary human dilemma of all—not knowing what to do afterwards. Cricket is all that Tendulkar has done. Take that away and, despite enormous fame and fortune, he has no clue about the direction of his life. That is what makes him do unwholesome things like accepting a Rajya Sabha seat knowing that he will be absent most of the time. It does not cross his mind that politics is as serious a vocation as cricket (would anyone have sent P Chidambaram as the 12th man of the Indian team because of his record in government?). But, in accepting the nomination, Tendulkar allowed himself to be part of a failed enterprise. You would not have caught Imran Khan doing something like that.

But despite his conundrum, there is no alternative to quitting for Tendulkar. His reflexes and stamina are gone. There is the vast cunning of experience with which he still manages to survive but at some point other factors will take over. The question he has to face is whether he wants to get out cornered or with grace. When he retired from ODIs, it was incredible how little reaction there was, as if no one really cared anymore. The 200th Test is his opportunity to go out with some of his trademark on-field flourish. He might not score a century but at least a double hundred against his name will make up for it.