The lone wolf has internalised the imperium, and when he pulls the trigger, or draws out the knife, or faces his executioner with the greatness of his god on his lips, he becomes a voluntary slave at this century’s most ambitious construction site of religion. The lone wolf has never been alone 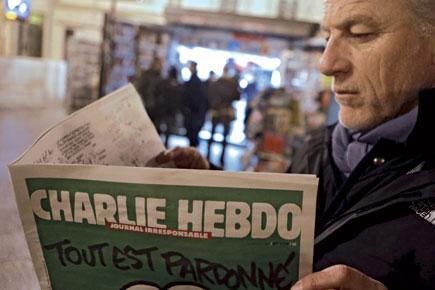 The lone wolf has internalised the imperium, and when he pulls the trigger, or draws out the knife, or faces his executioner with the greatness of his god on his lips, he becomes a voluntary slave at this century’s most ambitious construction site of religion. The lone wolf has never been alone

You could not have missed the tone of caution—and in some instances even revulsion—after the initial outpouring of outrage. Was the attack on Charlie Hebdo a case of first-rate cause and third-rate art? I would have said that about Taslima Nasreen but not about the men who died for their drawings. I-am-not- Charlie-Hebdo, coming from the left as well as the right side of the argument, asks us to take a pause before pointing our moral Kalashnikovs at the killers alone; it urges us to have a second look at the tastelessness of dissent. The non- Charlie refuses to join the theatre of protest and to buy the absolutism of free speech. He sees behind the prime time punditry and shrieking headlines the Manichean division of the world into good and evil, which itself is another manifestation of fundamentalism. The non-Charlie argues that every newsroom killing, every desert beheading, is a dramatic turn in a complex narrative of accumulated injustices, Western double standards, and the revolutionary history of Utopia. And the new killer, the martyr in service of a god threatened by cartoonists, columnists and novelists, is as much a victim as a villain, the product of a complexity the instant inquisitors will not see. So spare a thought for the lone wolf with a mind damaged by the ways of the world we, the cosy majority, live in.

It is a beguiling position, and it is an act of escapism as well. The Charlie version of satire is direct, and could even look crude. They are not English, working for The Spectator, stylists of understatement and subtlety. They are, invariably, more scatological than satirical; and lampoonery—straight and blunt—is very French. You could say that the fearless debunkers at Charlie Hebdo were insensitive to the faith and belief system of others; but they were not infantile as accused by some. If you are not a believer, religion is more than great literature and storytelling. It is cruel, violent and even comical, and it is this religion that the cartoonists and writers at Charlie Hebdo keep laughing at. Even in the land of Voltaire, the right to say—or draw—things others may not agree with is under threat. When religion abhors questions, it gets as tyrannical as ideologies that seek complete copyright over the believers. The radicalisation of Islam repudiates the inquiring mind. The blasphemer earns his banishment or death. Still, some cartoonists in Paris laughed.

That laughter does not make you a non-Charlie unless you are the last defender of the sacred. This writer still believes that religion is the most effective organiser of humanity. Does it mean that religion, man’s most abiding identity, is too sacred to tolerate doubt? This question leads to non-Charlie’s rage against reducing jihad to an all-Islamic evil. Fourteen years may be a tiny patch in history, but the scars on the twenty-first century have only one adjective—religious, or to be specific, Islamic. From 9/11 to Afghanistan to Iraq to the Islamic State, and in between such incendiary datelines as Bali, London and Mumbai, it has been the story of one religion’s struggle for/against power. The beauty of religion is the literary elasticity of its texts, their possibilities of interpretations. The horror of religion is… well, the literary elasticity of its texts, their possibilities of interpretation. The text of Islam continues to be read and misread for sustaining the twin essentials of its power struggle: conquest and the cult of martyrdom. Someone out there, somewhere in Arabia or Persia, is deconstructing the text for the expansion of a monochromatic imperium of absolute faith. And no other religion in modern history has undertaken such a global project in empire building. The lone wolf has internalised the imperium, and when he pulls the trigger, or draws out the knife, or faces his executioner with the greatness of his god on his lips, he becomes a voluntary slave at this century’s most ambitious construction site of religion. The lone wolf has never been alone.

Is naming his religion, or attributing an adjective to his enterprise, an act of insensitivity? The struggle within Islam is no longer a case of an innocent majority shadowed by the perversion of a few deviants. As the idea of Islam continues to be rewritten, and its geography redrawn, how is it possible to make an argument for sanity and peace without naming the nature of the struggle? And no amount of historical injustices—or indignations—can justify, or win, an argument for Islam’s struggle today. What can make a difference, though, is an audible, visible rejoinder from the saner side of Islam. Wrote the French philosopher Bernard-Henri Lévy in the wake of Charlie Hebdo: ‘What is needed from Islamic scholars and their followers is a courageous statement of modernisation—like the aggiornamento of the Second Vatican Council in the 1960s—clearly stating that, in a democracy, forcing obeisance to the holy is an attack on the freedom of thought. They should explicitly acknowledge that, in the eyes of the law, religions are systems of thought with no greater, or lesser, status than that of secular ideologies—and that the right to doubt them, debate them and laugh at them, like the right to join them or leave them, is the inalienable right of every citizen.’

In this enveloping silence, the scream of the next lone wolf will resonate louder. The world will be a better place if it pierces the conscience of the quiet majority within Islam.