Is This Really What We Deserve?

Rahul Gandhi too, like the other Nehru-Gandhi eminences, sees the Republic as an extension of the family 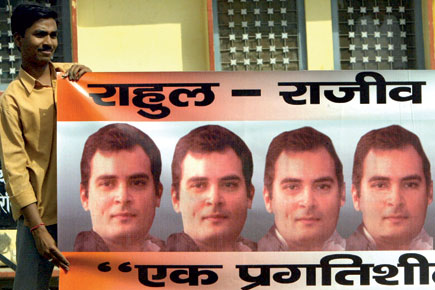 Rahul Gandhi too, like the other Nehru-Gandhi eminences, sees the Republic as an extension of the family


Rarely has Rahul Gandhi spoken at such length as he did the day after his party, the Congress, participated in the charade that always accompanies the elevation of a Nehru-Gandhi. Like so many others, I heard the speech with great interest. And like so many others, I heard and read the spin many commentators gave to the speech, even going to the extent of terming this Rahul’s ‘Obama moment’. Perhaps I didn’t hear the same thing they did.

Despite the boredom his protracted and dithering ascent to the post of Congress Vice-President has already evoked, I listened to him because the choice before us seems stark. Narendra Modi embodies a clearly articulated and for me a detestable agenda, and Rahul Gandhi, whether I like it or not, seems to be the only available alternative. But, unlike the commentators heaping praise, I came away from the speech with a clear sense that I do not particularly prefer this alternative.

The choice between Modi and Rahul Gandhi is not about alternative economic visions. They both represent a consensus on liberalisation that is visible in the continuity from the NDA to the UPA. As for claims about Modi being the man who gets things done, it is largely the work of apologists who would praise him in any circumstances and those who now seem to be flocking to his defence in anticipation of changing circumstances at the Centre.

He has done no better than several chief ministers of Gujarat over the past two decades, and he has done worse than some of them. Leave aside the natural advantages the state enjoys and we see his dismal failure in setting up a canal network for the Sardar Sarovar project. It is the largest development project being executed during his tenure in the state, and Modi is directly to blame for the failure of the project, whether in terms of actual delivery of water or the projected economic returns. Certainly Rahul Gandhi could have done no worse.

The real difference lies in how Modi views India’s minorities, Muslims in particular. The figures indicate that Muslims in Gujarat do worse in comparison with the general population in the state than Muslims in the rest of India do in comparison with the general population. This is not born out of his views on development, it is born out of the views of the RSS that he has imbibed and acted upon. This explains the continuity between Modi’s Gujarat during the 2002 violence and the decade that has followed.

The Congress is no stranger to violence against minority communities, as Sikhs outside Punjab found out in 1984, as Muslims in Kokrajhar have recently found out. But it does not have ideological moorings that extend that violence into a principle of governance directed against a minority. It is slender difference to pitch hope on, but it is all we have. For that very reason I wanted to see Rahul Gandhi, knowing that I hope against hope, convey an inclusive vision.

The first part of his speech was a rehash of the aam aadmi rhetoric he has tiresomely adopted without being able to tell the difference between a heap of burnt dung and the remains of charred bodies. This was sprinkled with a dose of Aadhaar-based cash transfers that the party hopes will buy it another election. Having switched to Hindi in the middle of his speech, he switched back to English saying, “Ab emotional baat kehna chaahta hun, dil ki baat kehna chaahta hun.”

He began his emotional baat by speaking about Hope (the capitalised letter is from the party release). He spoke about the men who taught him badminton shooting his grandmother dead, and he went on to say, “That same evening I saw my father address the nation on television. I knew, like me, he was broken inside. I knew, like me, he was terrified of what lay in front of him. Then, as he spoke on that dark night, I felt a small glimmer of hope. It was like a small ray of light in a dark sky. I can still remember what it felt like. The next day I realised that many people had seen it too.”

I could see the tragedy that unfolded for the family—such a death would be tragic in any family. But this should have been about more than the family. It is as if Rahul Gandhi believes what his critics have always said about the family, that its members feel the republic is an extension of their domestic arrangement, or to recall that old slogan, ‘Indira is India, and India is Indira’.

The secular alternative to Narendra Modi has managed to look back at the 42 years of his life and find ‘Hope’ in the aftermath of his grandmother’s killing. He has the perspective of nearly 30 years on the event, and he picks the night and day after Indira Gandhi’s killing as the moments when he felt a glimmer of Hope, when many people saw a “small ray of light in a dark sky”.

As Rahul Gandhi was feeling this ‘Hope’, his party members were engaged in the killing of Sikhs in Delhi and numerous other towns and cities of India. These few days count among the worst in the history of the Congress party (perhaps the imposition of the Emergency compares), and the man set to lead the party nearly 30 years later looks back to those days for inspiration. The man who was the source of this Hope, Rahul’s father Rajiv, was Prime Minister of this country, and like Modi, was guilty at the very least of standing aside and letting leaders and workers of his party slaughter people from a specific minority.

In the same speech, he explicitly mentions the year 1984 without even a nod to indicate the blot on his party invoked by that year. At one point, he takes note of the crowds outside the hospital where his grandmother’s body lay, “The hospital was green, dark and dirty and there was a huge crowd screaming outside. They were very angry, and as we entered, they were screaming and shouting.’’ And he leaves it there. For those who remember what happened next, it is not easy to leave things there. For good measure, as soon as he finished the speech, among the first few people he hugged was Kamal Nath, who on the day after the assassination, the day when many saw a ray of light, was at the head of a mob that burnt two people to death outside Gurdwara Rakabganj, within sight of Parliament.

In his personal need to seek strength in his family, he finds no space for how the event damaged the Republic. This is not a stray incident, it is typical of his approach to his family, the party and the country. He can talk of the lack of organisation in his party, without connecting it to the legacy of his beloved grandmother and his chacha Sanjay (read Vinod Mehta’s piece, ‘A Tale of Two Dictators’). He can talk of the history of the Subcontinent and claim the creation of Bangladesh as a family legacy. But worst of all, in being unable to face up to the legacy of 1984, he dilutes the one thing that should separate him from Modi.

Much as he derives strength from his family legacy, his inability to face up to uncomfortable facts related to the legacy is also his greatest weakness. Each time he speaks of his family’s contribution to the country, I am reminded of a rather well-known Philip Larkin poem about parents. It would help a great deal if he paid some heed to it:

They fuck you up, your mum and dad. / They may not mean to, but they do. / They fill you with the faults they had / And add some extra, just for you.