Inside the Soul of Dmitri Shostakovich

How much does it take to be an artist under Soviet communism? Julian Barnes' exquisite portrait of a tormented musical genius 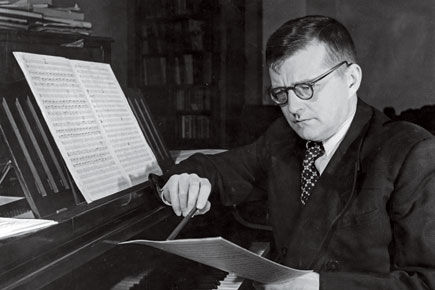 Dmitri Dmitrievich Shostakovich lived and died inside a colossal lie. Loved, loathed, purged, rehabilitated, feted, paraded, humiliated, decorated—it was a life where the only truth was his music, and it was a life sustained in a shell by the possibilities of irony, by the uses of cowardice, and by the redundancy of shame. One of the greatest composers of the last century wrote his music under the corrective gaze of Power, and it was the tastemakers of socialist aesthetics who would decide whether his creations were ‘music or muddle’—and whether he should be let to play a ‘game that may end badly.’ He survived—he owned a dacha, a chauffeur-driven car, and he would even get a direct call from Stalin—and, still, the scars of being alive were on his soul, in his heart-breaking symphonies. He survived, as a Russian composer (‘pessimistic’) and as a Soviet asset (‘optimistic’); the contradiction was a private struggle he did not overcome till the end.

Shostakovich was spared, and he paid whatever price Power had asked for its generosity—and still lived the double life of an indulged outcast (who didn’t hang a picture of Stalin on the wall of his Moscow apartment) and an individual intimidated to submission, a state of existence rejected by—or denied to—the Mandelstams and the Solzhenitsyns. He could have jumped from the window of Waldorf Astoria in New York, where he was on a propaganda mission on Stalin’s personal insistence, and lived in the freedom of exile. Instead, he just parroted Power’s commandments, and even denounced someone he most admired as a composer—Stravinsky—whose photograph he still kept under the glass on his table in his study. He did whatever Power had asked him to do, and his protests were feeble; and, in the end, he did something that even Stalin had not demanded. Khrushchev—Nikita the Corncob—denounced the Stalinist cult of personality but brought back the spirit of Lenin; he made the composer join the party, in spite of his conscience telling him to be a bit more courageous. It was the second time his son saw him crying; he drowned his sorrow in Stolichnaya, but Mephistopheles would want more of his soul and Shostakovich would give. That was his way of being left alone. He could take so much.

In the exquisitely constructed The Noise of Time (Jonathan Cape, 192 pages, £14.99), Julian Barnes does more than answer this. With a great sense of empathy and historical memory, the narrator of this slim novel has taken position inside the mind of the composer who was ‘born—or at least christened— beneath the star of cowardice.’ Though the life and music of Shostakovich run parallel to a dehumanising phase in the social evolution of man, Barnes, one of the original members of the postmodern quartet that took English fiction beyond the Englishness of the island (the others being Amis, McEwan and Rushdie), finds little time to step out of the inner world of the composer, a figure of calmness amidst the storm. Barnes is not distracted by history at play, or its physical props. He is the knowing stylus that captures the emotional ellipses of an artist who lets himself be controlled by a system that wants to reinvent not just the world but man himself.

Barnes divides the life of Shostakovich into three sections, each separated by twelve years: a waiting and two journeys. Focussing on three leap years (bad luck!)—1936, 1948 and 1960—Barnes, exhibiting supreme craftsmanship in condensing time and space, reduces a lifetime to an abridged parable. We first meet the composer waiting outside a lift in the night, with a suitcase at his feet, smoking nervously, for his tormentor to appear and take him away. This wilful submission is a more bearable alternative to the midnight knock. He is a man marked for his conspiracy against the helmsman, but in truth,he is marked for his music. Stalin himself was there when his new opera Lady Macbeth of Mtsenk was performed; and the verdict in Pravda, most likely written by the great tastemaker himself, would virtually end his career as an opera writer. His music now ‘quacks and grunts and growls,’ a danger to Soviet music, ‘a game of clever ingenuity that may end very badly.’ The outcast is born.

In the second part we see him on the plane, a man rehabilitated, a dutiful artist in service of the Soviet Union. He is on his way home from America after a propaganda mission against the West, a job assigned to him by Stalin himself. Why is he spared? One explanation is Stalin’s order that he is not to be touched; maybe he is a special beneficiary of the great dictator’s perverse admiration for the loftiness of art—he loved Beethoven, and he loved everything exalted. In the third section, the composer, a global star, and a party member, is in a car, driving towards the realisation: ‘Tragedies in hindsight look like farces. That was what he had always said, always believed. And his own case was no different. He had, at times, felt that his life, like that of many others, like that of his country, was a tragedy; one whose protagonist could only solve his intolerable dilemma by killing himself. Except that he had not done so. No, he was not Shakespearean. And now that he had lived too long, he was even beginning to see his own life as a farce.’

Shostakovich in the pages of Barnes is a life that takes its sorrows, and its defeats and varying betrayals, with a touch of irony—a sigh and a wry smile where tears could have been an easier option. ‘Being a coward required pertinacity, persistence, a refusal to change—which made it, in a way, a kind of courage. He smiled to himself and lit another cigarette. The pleasures of irony had not yet deserted him.’ Even as Power tests first the ‘extent of his courage’ and then the ‘extent of his cowardice’, ‘with an intense but essentially disinterested professionalism, like priests working for the soul of a dying man,’ he refuses to silence the interrogator within. Barnes listens to his thoughts as he has been listening to his music, which carries within it, as any form of art, ‘the whisper of history, heard above the noise of time.’

What happens when writers reimagine real lives—and maybe richer lives? It is meta-reading, and a private conversation between the master and the follower. Fiction has seen many such beautiful encounters, and Barnes himself has visited lives as disparate as the French novelist Flaubert and the Bulgarian dictator Zhivkov before. In The Noise of Time he profiles a Russian composer who escapes the Soviet terror by suffering in the gulag of his own soul.