India Between the Noise maker and the Conversationalist 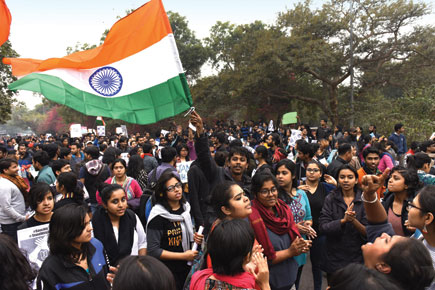 This is not a lament, and not certainly one at a time when what we hear and what we read are mostly outbursts of disillusion, despair, and revulsion. And who will dare to add to the current discourse on the Forbidden Republic of India that swings between the funereal and the farcical? What we miss in the noise are the good old pleasures of conversation, which is what sustains a democracy as a more meaningful alternative to systems where communication is a one-way affair, Power talking down to its subjects. The noise we generate here—the most polyphonic Babel on earth perhaps—is cited by awestruck students of freedom as democracy’s elemental volatility, its dizzying diversity. The noise we hear today, the anger that burns morning papers and airwaves, is about an India that is a set of stereotypes comprehensible only to the believers of social and cultural wretchedness, of endangered nationalism, or of the myth of nationalism.

You cannot miss the noisemakers, and what distinguishes them from conversationalists is that they are firing all these words to reform you, to convert you. They do not expect you to react, to ask questions, and they are not interested in what you may have to say. The noisemakers trade in dead certainties; they are the custodians of a monochromatic world where wisdom is an inherited belief system, immune to time, space and history. They are out there, in full force.

First meet the angry outsider, still haunted by ghosts of redundant ideologies, waiting for his moment of martyrdom in this land without justice. He already has a text prewritten in his mind, and what he needs is a suitable context. He builds one, imagines one. For him, armed with ‘subaltern’ jargon, life is a permanent struggle, and he inhabits a place where a clash round the corner between two incompatible ideas of persecution is nothing short of fascism. The sub-rural thugs we routinely call Maoists, just to cite an example, are freedom fighters; and a generation whose reading list includes only pamphlets is entitled to declare its revolutionary adulthood by tearing apart this country under the jackboots of nationalism in its slogans. The disenfranchised rebel, whose retreat into his own private soviet has been hastened by the mercilessness of history, regains the romance when he sees apprentice usurpers at play on the campus. With overflowing paternal sentimentalism, he even wants to adopt them, even if metaphorically. The noise he makes abhors argument, and he does not have the necessary intellectual sophistication to engage in a discussion. There is a frightening finality about his sentences, about his self- righteousness. He does not require a counterpart, for dialogue is submission, and it requires the generosity of listening to another voice. That is too much to expect from those who are only accustomed to the uplifting monotony of their own words.

Pitted against him is the nationalist on steroids. In the art of communication, he is no different. He is the last custodian of a nation under attack; he is the last vigilante as barbarians— secular separatists, Kashmir-struck Pakistan worshippers, campus insurgents and Afzal Guru bhakts—camp outside the gate. He echoes the old commissar: behave or be damned. It is his constant endeavour to educate us, to enlighten us, on the sacredness of Mother India, on the profanities of the West, on the cultural exceptionalism of being Indian. It is his civilisational— read ‘Hindu’—duty to protect India from counter-cultural viruses, which keep multiplying. His India is so brittle that it may break into a million pieces under the weight of a few anti- India slogans. He wants a unipolar Mahabharat—and he wants enemies to rage against, so as to emphasise his own patriotism, his unwavering nationalism. His rage too is an affront to argument— and to the idea of the Right in this age. He wants the loftiness of a pulpit to deliver his sermons marinated in paranoia and persecution complex. Sermons do not believe in the equality of conversations; they are an expression of power. They demand obedient listeners. Rebuttal is anti-national subversion.

This is hardly a battle for India; it is a battle for institutionalising two versions of extremism. And it is fought with statements formed in closed minds. It is not fashionable to ask, why can’t we talk to each other? Why can’t we indulge in the joys of conversation? One evening this week, the question acquires a rare poignancy. The man sitting across me is not God’s spokesman. He is not a poster guru either, a divinity in flowing robes or a picture postcard ascetic in his yogic masculinity. There is an extraordinary ordinariness about this man in a kurta pyjama. The ease with which we engage in a conversation is in stark contrast to the thick air between the Higher One and the seeker. Sri M—the backstory of this four-letter brevity is the journey of a man born with a longer Muslim name to the Himalayas and a mind seeking answers through conversations—is on an Indian yatra. Delhi is not a stopover, not another way station, and not a pause either. It is just another word in a sentence of reconciliation. “Why is it so, why is it that the nation is a disputed item?” he asks. “It is the extremism of the mind that shrinks the space for peace,” he tells me.

What adds extra resonance to these simple words is Sri M’s idea of communication. He has written books, including his widely translated memoirs; he delivers speeches; and he is not averse to an audience. What sets him apart is that he is not steeped in the exalted kitsch of gurudom. He has resisted the pedestal. He is the intimate yogi without the yogic aura; the wise man without the tedium of a didact. His yatra is not seeking a destination; it is seeking answers through roadside conversations. Adi Shankara covered the distance through arguments. Sri M is a traveller for whom the everydayness of conversation is an antidote to the age of hatred. “I don’t impose; I engage,” he tells me.

It is the modesty of his mission, and the intimacy of his sentences, that makes Sri M an original—and a refreshing repudiation of noisemakers. Let someone continue the conversation.