I am the man

An application for the job of the Pope 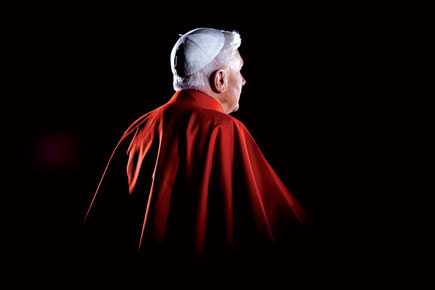 An application for the job of the Pope

In the aftermath of the sudden resignation of Pope Benedict XVI due to his advanced age and fear of delirium, which is reasonable taking into account the fact that when he was believed to be mentally fit he had said that condoms spread AIDS, as you seek a Supreme Pontiff of sound mind from an eminent pool of sixty-to-seventy-year-old virgins, kindly consider this application for the job of Pope from me, Manu Joseph I, a member of the laity. I am aware that you do not seek applications, but I apply because the Church is in a precarious state and it has to consider extraordinary solutions. My CV, which is enclosed, may appear unremarkable at first glance, even pointless when the marital status is noted, but if observed carefully the applicant has merit. For instance, the Church is surely wise enough to know that men in long faithful tropical marriages are indeed somewhat acquainted with celibacy. Also, I am a young male, though not so young that I will lead cardinals to sin; and, once on Indian national television I was accused of misogyny; and, through my writings and one Facebook post, I believe I have relentlessly advertised the Son of God though in the form of an endearing sub-culture, actually to be honest, in the form of a liquor found in Kerala, which is named Jesus Christ because after you drink it, you will rise only on the third day. But more important than all this is that I am a novelist, which none of the former Popes have been, even though Christianity has emerged from the Great Story.

In fact, I can see clearly that the crisis that has befallen the Church is that it has failed to grasp the single most crucial principle today in the promotion of a cultural franchise, which is what the Church is. And the principle is very simply—do not antagonise women for they are the patrons of culture. Any work of quality fiction that fails to get this is doomed. The Holy See has much to learn from modern male novelists. The art of the new man is nothing if he is unable to transmit what women hold dear. The Church, on the other hand, is constantly annoying them. I do too, I am told, but at least I am aware.

Also, as the Church fights to survive in Europe where commonsense has reached epidemic proportions, and in the rest of the world where Protestants have employed song and dance and epilepsy to diminish Catholicism, I believe it is time for an Indian to transform Catholicism.

I must confess now, though, an important fact. Ever since I remember, I suspected that the world goes around the Sun, I even said so in school, long before Pope John Paul II confirmed it for all Catholics in 1992. I am confident that my juvenile arrogance will not be held against me. If this helps my case, let me say that I do believe that the opening line of the Great Story has influenced a whole body of science that is obsessed with the idea that the Universe had a beginning. Most of the infidels had no concept of a beginning, or that it is important, but the Church succeeded in seeding the idea in everybody’s head through the Belgian Catholic priest Lemaitre and his “hypothesis of the primeval atom”, which later evolved into the Big Bang theory. There was a time when great scientists saw through the Catholic influence on the Big Bang, but the theory is now so fundamental to science that the Church has prevailed. If I am made Pope, I will ensure that the Pontifical Academy of Sciences crushes any dissent as long as I am alive.

As you are aware, church attendance is falling in the First World. In France, for instance, only 10 per cent of Catholics attend Sunday mass. In India, the secretary general of the Catholic Bishops’ Conference of India told me (about seven years ago)* the figure is 80 per cent. And most of them donate. Because of their relative poverty and currency rates, their donation is not as valuable as that of the sheep in the rich world, but India is prospering and growing. Imagine what an Indian Pope can do for the Church in the next few decades. This is the place, Roman Curia, this is it. There are already 17 million Indian Catholics, four times the number of Catholics in Great Britain and one third of America’s herd. Also, for several years now, as there has been a paucity of priests in the West, it has been outsourcing Indian priests, who are plentiful.

I hope I am not insolent in stating the fact that the Pope is not the only Catholic who rules over 1.2 billion. There is a Roman Catholic in India who rules exactly as many people, and I have a letter of recommendation from her in your language, which I do not understand:

* This article was modified after it was published