How I Loved the Recession 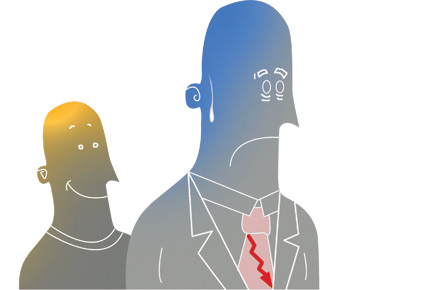 
It must be my poverty or decadence, I cannot tell, but I greatly enjoyed the financial calamity that began last year. About four years before the sudden humiliation of Wall Street, I had walked down that lane in jacket, jeans and running shoes, and a monkey cap. I felt austere as I passed elegant men in black suits and serious women in funereal colours and heels so sharp they would be an aviation risk. They were smoking anxiously near enormous wooden doors or under high arches. I thought they must be in the middle of something very important. In those clothes, it is very hard not to do something important. So, when news of the collapse of American investment banking broke and we began to learn of their mass foolishness and naïve hypotheses, I thought of the stylish smokers on the Manhattan wayside and told myself with delicious pastoral simplicity, “That’s it? That’s what you guys were doing? Trading the fragments of an unemployed drifter’s bad loan?”

In the days that followed, Indian markets sank. I have my own easy-money index which is pegged to the Sensex. It is essentially the decibel level in some high-end vegetarian restaurants of south Mumbai where, in times of boom, so many Gujaratis are laughing at once that you would think your head is going to explode. From the din, you pick up expressions like ‘flat-screen’, ‘vacation’, ‘I’m doing up my house’. And in times of bust, there is relative calm and you can hear a grenade go off. There was such a peace last September. But what I enjoyed most was the look on the face of real estate brokers.

Those semi-literates, before the markets crashed, would not take my calls. I was searching for a house in Colaba but I realised that all the brokers were interested only in the big deals, corporates that threw absurd money to house their executives. Some brokers hung up when they heard my budget, which was not exactly a small amount—you could buy human organs with that money. Some brokers grudgingly sent their office boys to show me hell holes, like a bunker whose walls were painted bright red by a mad woman with a large bindi. One boy took me to a flat where the landlady had a demand—she would rent out the flat to me, but she would live in the balcony. Another broker told me on the phone that he did not deal with such small budgets and gave me the number of his mother who might be interested in representing me. There was one decent broker, though, who wanted to help me, but he himself was shocked at how ridiculously high the rents were. After the markets crashed and the easy money vanished, the other brokers become amiable, they even showed brotherly affection. I felt as if I was the only one left standing in Colaba. I eventually found a good flat at a just price.

In the final quarter of last year, flights from Mumbai to Delhi went almost empty as if executives were now being booked on Rajdhani. This magazine was being birthed then and I had to travel often to Delhi. Typically, I would enter a Kingfisher flight and find one or two CEOs in business class. They would look sheepish, even apologetic. You could stare at them for fun and they would squirm as if they just realised children were starving all around them and they were paying thousands of rupees more just to sit in bigger chairs. Those very men in the business class had probably slashed jobs and announced pay cuts, deriving moral strength from the rumour of an impending recession. Inevitably, conferences scheduled in tropical retreats were shifted to office conference rooms. As a result, air fare and hotel prices softened, and an international vacation looked somewhat affordable.

Also, the financial crisis inspired the exquisite journalism of America to produce some of its best feature stories ever, like Nick Paumgarten’s ‘The Death of the Kings’ in New Yorker, and Michael Lewis’s ‘Wall Street on the Tundra’ in Vanity Fair. These stories profiled the imbecility of the notional money business and I was reminded once again that at the heart of our respect for some seemingly successful people is our incomprehension of what exactly they do for a living.

But now the storm has passed, and I get this feeling that the decibel levels in some vegetarian restaurants are rising again.