Grand Alliance in UP must have Mulayam, Mayawati: Congress

Congress leadership believes that to beat the BJP in UP, Samjawadi Party of Mulayam and Bahujan Samaj Party of Mayawati will have to come together 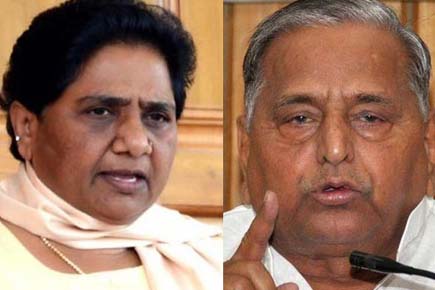 Congress leadership believes that to beat the BJP in UP, Samjawadi Party of Mulayam and Bahujan Samaj Party of Mayawati will have to come together

At a time when Bihar chief minister and Janata Dal United leader Nitish Kumar is trying to imitate a Bihar kind of grand alliance much ahead of the assembly elections in Uttar Pradesh, Congress which is part of alliance Government in Bihar feels it is an uphill task.

Last week when Nitish Kumar was in Delhi he met Rashtriya Lok Dal party leader Ajit Singh and other smaller party leaders of UP to discuss a repeat of the successful alliance against BJP in Bihar. It is still little more than a year for the assembly elections but political parties have already started the ground preparations. Nitish’s effort showed some sign of acceptance with the news of RLD deciding to merge with JD(U). But while Nitish was still in Delhi, Congress leadership raised a question on the winning ability of any such alliance in UP. “ UP is quite different from Bihar,” said a senior Congress source to Open. “For any grand alliance against BJP in UP, both Mayawati and Mulayam have to come together. Frankly we don’t see it happening on the ground.”

Sources closed to Congress leadership revealed to Open that the party wouldn’t just jump the gun to be a part of Nitish’s plan. Congress vice president Rahul Gandhi was instrumental in cementing the grand alliance between Lalu, Nitish and Congress in Bihar. But he is not keen to play a similar role in UP as he feels conditions are different. Congress leadership believes that to beat BJP in UP, Samjawadi Party of Mulayam and Bahujan Samaj Party of Mayawati will have to come together.

Earlier, SP eader Mulayam Singh Yadav expressed his willingness to go with Mayawati in the larger interest but the offer was blatantly denied by Mayawati whose party BSP is the main opposition to SP in UP. The charismatic performance of the BJP in 2014 Lok Sabha elections (winning 73 out of 80 seats) in UP has been a cause of worry for all the parties. One and half years have passed but political parties are still scared of the growing popularity of the BJP. Some of them want to come together and even Congress is not averse to the idea of an alliance like Bihar. But the party feels that it would require a bigger heart from the regional parties in the state the way Nitish and Lalu showed in Bihar. That is the reason, Congress leadership is still weighing the options in UP. On the other hand, Nitish Kumar first wants to get smaller parties like RLD, Peace Party, Mahan Dal take along and then put pressure on Congress to join them.

But Congress suspects that the alliance won’t be grand until all the forces fighting the BJP come together. “We can’t say about future. But at present this is what we believe,” says the senior Congress leader.