As the state gears up for its first phase of voting on 12 October, EVM prototypes are selling like hot cakes as awareness material 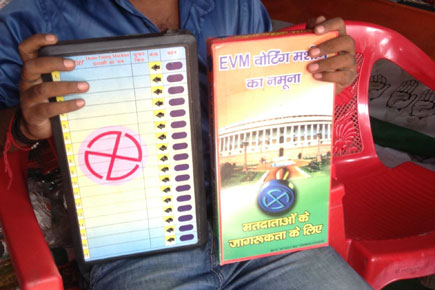 As Bihar gears up for one of the most exciting elections in recent times, the demand for election campaign material is picking up. It is not difficult to notice the Electronic Voting Machine (EVM) prototype among the posters, caps and flags. EVM prototype is the new star on the horizon. Every shop that sells campaign material in Patna puts the EVM in front for the curious onlookers as well as party activists.

“Everyone comes here and asks about EVM,” says Sonu Kumar who sells election material at the BJP state office on Veerchand Patel Marg, Patna. “The candidates also come to us and we explain them how useful it could be in their election campaign. Currently I sell around 20 to 30 pieces a day. Sonu’s shop sells campaign material only for the BJP and its allies. “My brother has a shop outside JD(U) office. My entire family is into the same business,” he says proudly.

Sai Traders is a well-known name for election posters and other materials in Patna. 28-year-old Raviraj, the owner of the shop, is very excited about the EVM machines. Two types of EVM machines are available. One comes with a plastic hard cover and LED lights fitted inside. The candidate’s name is kept blank to allow one to put his/her name and party symbol in front of the number mentioned in the EVM. “There are several candidates with similar names and the voter might get confused,” says Raviraj. “The candidates can show the prototype to voters with their exact position in the EVM.”

The plastic EVMs are manufactured in Jaipur, and sold for Rs 225. The other EVM is made of hard paper and manufactured by Raviraj himself. “As the plastic EVM is expensive, we invented one with a hard paper cover. It costs just half of the price of the plastic one and is becoming popular,” adds Raviraj who claims to be getting orders of around 400 EVMs per day. “This is just the beginning. The market will improve during the second phase,” he says.

Siddharth Singh, Congress candidate from Bikram constituency has placed an order for 500 EVMs. His election is in the third phase, on 28 October. “The RJD and JD(U) voters need to know that Congress is their alliance partner and they need to vote for me,” he says. “A prototype EVM makes it easier to make the illiterate voter understand.”

The election campaign material market got a major boost during 2014 Lok Sabha elections when the BJP spent heavily on its campaigns. “The current market for materials is nothing as compared to what we sold in 2014,” says Navin Kumar of Jyoti Traders. “This time the demand is mostly from the BJP and JD(U).”

The EVM prototype carries a slogan on its back that says, ‘It is for voter awareness’. “I think more than the voters, it’s the candidates who need to be aware of what difference this EVM could make to their poll prospect,” observes Navin. Traders believe that EVM prototypes would attract enough demand after the first phase voting.