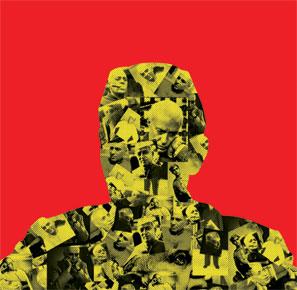 We have this amazing capacity to turn complex characters from history, I mean characters who have shaped or even distorted our national identity, into talismanic refrains. We, as appropriators, apostles, iconoclasts, believers, and lazy caricaturists, reduce them to the size of our collective miscomprehension. The past is another country where our desperations, political as well as cultural, are being played out. It is also a place where politicians starved of ideas or an attitude to deal with the demands of a changing world shop for names they think will enhance their slogans. And it is where the proof- readers of our cultural heritage decipher the palimpsests of—what else?—Indianness. If historical figures are permanent reinventions in any society that is inquisitive, unforgiving, and conversational, India is that rare fertile field where variations of the original are born every other day. We reinvent them to feed our mytho-mania.

So Gandhi, the Mahatma-ised father of the nation assassinated by a misplaced argument on the nation, is a moralist incompatible with modernity. His idea of living in truth, or his experiments with his desires and fears, continues to be denied its subtleties of psychology and the mysteries of a man so certain about himself without being dogmatic. But blame-it-on-Gandhi is a drawing room simplicity, maybe only rivalled nowadays by the Patel-rap of national priapism. Great man that he is, Patel is being monumentalised at the risk of his being reduced to the one-dimensional Strongman of India. This appropriation disengages him from the larger narrative of brotherhood built on mutual respect and appreciation that was the national movement to some extent, in spite of the presence of such an array of formidable minds at play.

Unarguably, the most formidable of minds was the one that turns 125 today. In this commemorative moment, Jawaharlal Nehru, the first Prime Minister of India, is the Congress party’s private asset, maybe a necessary historical glow set against the dying embers of the Dynasty. The funny part is that the Nehru revellers of Indraprastha are the delegitimised custodians of his legacy. And they have kept the current Prime Minister of India, the so-called usurper of Nehruvian India, out of the birthday bash. But the usurper has gone one step further. He will not be the one to say that Nehru has been made redundant by the trajectory of his own ideals and the politics of his descendants. The year-long Government-sponsored celebrations only show that the Nehruvian adjective is still useful for someone determined to perfect his own iconography as a unifying nationalist and a pragmatic internationalist.

What lies beyond the hyperbole of birthday literature is the truth of how the Nehru project set ideological conditions for the growth of the nation he built. He was the moderniser who borrowed his models from the oversized industrialisation of Stalin. But he was never an apologist for Stalinism. He was a true internationalist, swayed by the idea that the shared destinies of nations let the true statesman rise above the limits of geography. But his internationalism, in the end, was a testament of Third Worldism, a mindset that is still prevalent in the Indian Establishment. The Non-Aligned Movement was a euphemism for anti-Americanism and closet Sovietism, and it was populated by, apart from a few good men, liberators-turned-cannibals and other sundry sociopaths. That said, the Nehruvian worldview was a romance of the liberated. The sight of free India’s first parliamentarians taking their oath in the name of global peace and harmony was something original—and daring. Wars still rage near and far but we have somehow lost our national sensitivity to align with the struggle of others. The Nehruvians have been particularly mute.

They have not inherited the Nehruvian idealism. The idealistic do not always win. But the mark of their idealism is the longevity of their argument. If the secular idyll was an aesthetic of Nehruvianism, the first Prime Minister, like any overreaching idealist, was a victim of his own mind. The Nehruvian New Man—secular, scientifically tempered, and God-proof—was an ambitious project, and the closeness of his origin to the social engineering perfected by communists elsewhere was not coincidental at all. Nehru the intellectual could not have missed the anomaly of creating such a model citizen untouched by the most intimate tradition of man: religion. The tyranny of reason ensured the unfeasibility of the New Man. And the secular ideal, when imposed from above, degenerated into a ghetto-friendly ism. Isms are artificial, manipulative, and oppressive. The state of being secular, without official guidance, is the natural instinct of those who adhere to the dignities and decencies of communities. The state- managed ism divided the mind of India.

Still, the Nehruvian mind is what we miss the most today in the political arena where shrill statements are being accepted as arguments and crassness is being promoted as originality. Political power has, with rare exceptions, become incompatible with intellectual and cultural sophistication. Nehru was the philosopher-king of the East, who loved a good sentence as much as he loved the idea of a freedom that was more than political. Nation building can be the mission of a beautiful mind, he showed us. Rarely has such elegance had a tryst with the destiny of a billion people. Imagine a conversation between the great man and his great grandson, who had promised a new Congress a while ago, to realise the generational descent of the Nehruvian mind: from the sublime to the ridiculous. And to indulge in the brutality of turning one of the most sophisticated intellects in politics into a one-dimensional man is a crime against good taste.

India of the moment may be a rejoinder to Nehruvian assumptions. But, as the following essays by some of India’s brightest and boldest in the business of arguments illustrate, India’s conversation with the remains and romance of the Nehruvian legacy will continue to be inconclusive. That’s the beauty of a good argument—and enjoy a fabulous few in this collector’s edition of Open. The Nehru issue remains, as befits the man, unresolved.