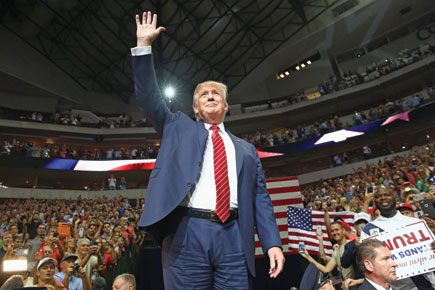 Donald Trump is looming before us like a disconcerting giant, a perverse, noisy Gulliver in a Republican Lilliput.

With his adopted party’s presidential primary just a little more than two weeks away, Trump leads his nearest rival, Ted Cruz, by a clear—some would say hair-raising—14 percentage points in the polls. As of this writing, the Real Clear Politics average of multiple nationwide American polls has Trump’s support at 34 per cent, an astonishingly far cry from the two-and-a-bit per cent he could call his own in June last year, when he declared his presidential candidacy to widespread derision.

The true impact of Trump’s success comes not just from his own numbers, but from those of the opponent who was vaunted to win the nomination when the contest began last year: Jeb Bush, the brother of one president and the son of another, sits forlornly at 3.8 per cent, despite having raised $125 million in campaign contributions from donors whose money is going straight down a dynastic drain.

Unless something goes dramatically wrong with Trump’s campaign in the very near term, the party of Abraham Lincoln and Ronald Reagan, Teddy Roosevelt and Dwight D Eisenhower is set to nominate to the White House a gaudy businessman who has described Mexicans as “rapists”; called for a prohibition on the entry of Muslims into the United States; dissed Senator John McCain, a national war hero, for being taken prisoner in Vietnam; tried to pass off his years in a military high school as the equivalent of military service; and insulted women with such frequency and bad taste that the word ‘misogynist’ hardly seems to do him justice.

Every week—if not every other day—there is a new Trump locution that draws gasps from neutrals or opponents and applause from his supporters: a thuggish barb, a macho put-down, a volley of vitriol, or an attack on a candidate’s eligibility for election (such as his questioning of whether Ted Cruz is a “natural born” American).

As Elias Canetti has written, ‘Success is the space one occupies in the newspapers. Success is one day’s insolence.’

With the ascendancy of Donald Trump, American conservatism lies in disarray. He espouses views that are anathema not just to the Republican Party’s establishment, but also to influential conservatives with no formal affiliation to the Grand Old Party. The editorial page of The Wall Street Journal—the pre-eminent voice of American libertarian- conservatism (‘free markets, free people’ is its credo)—is at war with the man. It has described him as, potentially, the Republican Party’s ‘most protectionist nominee since [Herbert] Hoover.’ This was after Trump said, at one of the many circus-like Republican presidential debates, that he would kill the Trans-Pacific Partnership, or TPP, a trade deal among a dozen Pacific Rim countries.

“The TPP is a horrible deal,” Trump insisted. “It is a deal that is going to lead to nothing but trouble. It’s a deal that was designed for China to come in, as they always do, through the back door and totally take advantage of everyone. It’s 5,600 pages long, so complex that nobody’s read it. It’s like ObamaCare; nobody ever read it. They passed it; nobody read it. And look at the mess we have right now. And it will be repealed.”

More than any boorish insult hurled at a female TV anchor, it is words like these that give us the truest sense of Trump. They appear to betray great ignorance of the benefits of trade, of economics, of the way treaties are done and international politics conducted. But there is method to this bluster: it is a peacock-display of populism that flaunts a break from the classic conservatism of the Republican establishment. Here, it is a rejection of free trade, which, while a non-negotiable principle to the likes of Jeb Bush (or The Wall Street Journal’s editorial page), is a source of anxiety and mistrust for the blue- collar workers and struggling members of the American middle- class who are drawn to Trump’s tune.

Trump’s supporters are the key that unlocks Trump. Who are they? David Brady and Douglas Rivers, two political scientists at the Hoover Institution at Stanford University, source his support to ‘white evangelicals, the disaffected, tea partiers, the annoyed, and the anti-establishment base of the Republican Party.’ The demographics, say Brady and Rivers, show that ‘slightly over half of Trump’s supporters are female, about half are between 45 and 64 years of age, with another 34 percent being over 65 years old.’ Less than 2 per cent are younger than 30.

While it is clear that Trump has won over several Tea Partiers to his side, his candidacy is very different in mood and tenor from that earlier Republican insurrection. The Tea Partiers were—are—a back-to-basics movement of conservatives, exhorting a return to the textbook principles of small government and low taxation.

Immigration, however, was an issue on which they parted ways with the GOP political elite, and immigration it is, again, that marks out Trump.

Immigration, in truth, has been the bane of American conservatism, the cause, in large measure, of the unravelling of consensus. It is the issue on which the party establishment parts company with much of the base. Reagan and the two presidents Bush had an approach to immigration that the Trump camp (and even many party members who aren’t with Trump) would find indigestible today.

I chanced upon a poignant clip on YouTube from a presidential- race debate in 1980 between Republican candidates Reagan and George HW Bush. Responding to a question about undocumented Mexicans in Texas, Bush Sr said that “something should be done about the illegal alien problem that would be so sensitive and so understanding about labour needs and human needs that the problem wouldn’t come up.”

Reagan, predictably, was both pragmatic and eloquent, but his message was the same as Bush’s. “Rather than putting up a fence,” he said, “why don’t we work out some recognition of our mutual problems. Make it possible for them to come here legally with a work permit, and then while they’re working and earning here, they pay taxes here. And when they want to go back, they can go back. Open the border both ways.”

Both candidates beamed, and the audience applauded. Can you imagine an exchange like that with Trump on the podium?

George W Bush styled himself a ‘compassionate conservative’ in 2001, for which he took some flak from those on the right who bridled at the suggestion that conservatism wasn’t inherently compassionate. Whatever the philosophical differences of that time, it is safe to say that the conservatism of a significant proportion of the Republican base today is what one might call ‘uncompassionate’. Of course, to describe Trump as ‘conservative’ gives rise to all manner of ideological objections. How conservative can a candidate be if he wishes to curtail free- trade agreements, impose import tariffs, and leave social security largely unreformed?

Trump is a populist; or, better put, an ‘uncompassionate populist’, given his promises to build a wall on the Mexican border and curtail the rights of Muslims in the United States. His positions on trade are classics of economic populism. (By contrast, Bernie Sanders, the socialist challenger to Hillary Clinton for the Democratic presidential nomination, might easily be described as a ‘compassionate populist’.)

So in the span of eight years, the Republican Party has gone from having a president who was flexible on immigration and a dove on multi-religious co-existence to being on the brink of selecting a candidate who reviles Mexicans and Muslims. What explains this revolution, for want of a better word?

Eight years of Obama have reduced the Republicans to a rabble. If the man in the White House has one unquestionable legacy he can boast of to his party faithful, it is his driving of the GOP to self-destruction. So unhinged have the Republicans been by Obama, by his two-term lock on the presidency, by his doctrinaire remaking of America, and by his unshakeable self-regard, that they have sought to counter him by taking to the hills and waging guerilla warfare on the White House. This has often been unseemly—and almost always unproductive.

In failing to breach Fortress Obama—especially after a conservative Supreme Court failed to strike down the president’s health care legislation—the party turned on itself. The base came to regard the establishment as having failed the party, and, by extension, as having failed America. Donald Trump was no fool. Unlike Jeb Bush and the establishment—with their decorous resort to reason and consistent principles—Trump knew that his success depended on his ability to harness popular anger. So he stoked the rage of the base, week after week, saying things on television, in debates, and to newspapers, that had previously been unsayable.

In doing so, he trampled over basic courtesies and the dignity of his interlocutors, and he trampled right over the most precious tenets of conservatism. He didn’t care. It was the rage he was after: pure, priceless rage that would win him the nomination.