After fifteen failed attempts at electing a Prime Minister, the question in Nepal now is whether it can maintain its cohesion 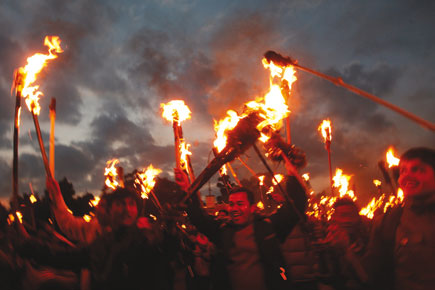 After fifteen failed attempts at electing a Prime Minister, the question in Nepal now is whether it can maintain its cohesion


The end of Jana Andolan II in Nepal came in spring 2006 with the ouster of King Gyanendra. The royal family lost privileges. It now had to pay for electricity, even duty for dog food imported for palace canines. The following year, it lost most palaces. Royal Nepal Airlines shed ‘Royal’. Currency notes got a cloud-plumed Sagarmatha—Mt Everest—to replace Gyanendra and his plumed crown.

Remarkably, a Maoist commander, ‘Prachanda’, became ‘The Rt Honourable Prime Minister Pushpa Kamal Dahal’, the democratically elected premier of Nepal, in August 2008. But he lost that job by May next year to political intrigue and personal obtuseness. His once lithe party, Unified Communist Party of Nepal (Maoist), has since emerged as a cloddish deal breaker. The transition mirrors Nepal’s relative slide.

And now, critically, what Maoist rebels and outraged citizens alike fought for, a new constitution by May this year, lies derailed. The country has had an elected Constituent Assembly since April 2008, but it hasn’t moved beyond political squabbles and staggering from one budget to another.

Nepal has had only a caretaker Prime Minister in Madhav Kumar Nepal since he resigned this past June. Several attempts to elect one by majority have failed. Dahal, leaders of Madhav Nepal’s own party, Communist Party of Nepal-United Marxist-Leninist, and the dynasty-driven Nepali Congress, came up short. Meanwhile, the increasingly influential Madhesi parties, which provide voice and aggression to lowland people of Indian origin, have emerged as kingmakers.

The fifteenth round of elections to find Nepal a new prime minister and provide cohesion to the process of the Constituent Assembly failed on 1 November. But the point no longer is if Nepal will have a new prime minister. It is whether Nepal can pull off being a federal democratic republic and keep its heart, soul, people and economy together.

That Nepal has not reverted to fracture and rebellion is a sign of how much its people wish to leave behind oppression, civil war, and the chaotic aftermath that passes for peace.

The economy has picked up pace from the 1 per cent or so in 2006 to an average growth these past three years of a shade under 4.5 per cent a year. This is fuelled primarily by agriculture that anchors more than a third of the economy. Remittances by Nepali workers accounted for close to a quarter of its GDP in 2009. In Southeast Asia, the ‘new Indians’, as it were, are Nepali. The worker-transients that arrive in India comprise up to six million people at any given time—nearly a fifth of the population.

But taken together, the economy is basically an auto-pilot holding operation with nearly zero input from nearly non-existent government. It isn’t yet robust enough to suffer dislocation in even one key area of contribution, including fair-weather—and decreasing—tourism.

There is rumbling within Maoist ranks—and leadership. Dahal and top leaders Baburam Bhattarai and Mohan Baidya are helming a three-way course to impose their version of the party line.

Ever suspicious of India—with good reason: India’s establishment has been an active player in Nepal for years—Maoists have recently used PR visits to China to suggest a three-nation discourse to solve Nepal’s political tangle. The Maoist posture isn’t new; Nepal’s various rulers have for long used China as a negotiating lever against India. But the swing suggests how much the Maoists are scrabbling to retain influence and power.

This is reason for concern. Maoists still have a substantial standing army and access to cached weapons, even though many cadres have slipped away home from peace camps, where token weaponry is stored under United Nations supervision. Meanwhile, various integration models have been rejected by Nepal’s army and police. Until former rebels are honourably re-integrated into society, the issue will remain a sticking point.

And until positive momentum is restored in the Constituent Assembly, Nepal will continue to provide nervous moments for itself and its neighbours.