Listening to the claims of Manmohan Singh, Mulayam Singh Yadav and Karunanidhi 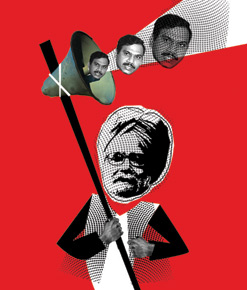 Listening to the claims of Manmohan Singh, Mulayam Singh Yadav and Karunanidhi

Indian Prime Minister Manmohan Singh finally decided to get into the heat and dust of elections. He began with Assam and then on Sunday stood before an audience of Malayalees in Ernakulam in Kerala defending his government’s achievements. Never the most excitable of orators, he was as deadpan as ever, speaking as if it were a SAARC summit.

Some illustrations: “The Indian Naval Academy established at Ezhimala is a world class educational and training facility for the Navy. The Bharat Earth Movers Ltd has set also up a new unit in the State”, “The long pending International Container Trans- shipment Terminal at Vallarpadam in Kochi, built at a cost of about 2,100 crore Rupees, was dedicated to the country in February 2011”, so on and so forth.

Not exactly the stuff to get a crowd foaming and frothing, but they might have perked up a little when he talked about corruption. He said, “We are also accused of not trying hard enough to check corruption. This accusation is completely false. The truth is that we have taken more measures than any other Government to contain corruption…The Right to Information Act has empowered the common citizen to know more about the work of Government than ever before. This has not only increased the possibility of irregularities coming to light, but has also induced fear in those who want to indulge in malpractices…We wanted to enact a few more laws for fighting corruption. But we could not make these laws because of a total lack of cooperation by the opposition parties in Parliament.”

Just as straight-faced was Mulayam Singh Yadav when he finally decided to pay a visit to riot-hit Muzaffarnagar and addressed a rally, and sought to portray the Samajwadi Party government’s response as the best there has ever been in Indian history to any riot. The Uttar Pradesh government has been facing charges of extreme apathy for the manner in which it evicted riot victims from relief camps. In such an environment, Mulayam said that earlier riot victims were never given assistance. “For the first time ever, we decided that the families of those who died in the riots will be given government jobs. And besides that, we will help them build houses. And we helped.”

Coming from a leader who ignored the area during and after the riots and is only visiting just days before polling to ask for votes, it is strange that he would expect to be taken seriously. But that is why they say politicians have short memories and thick skins.

Another hallmark of the breed is that they never say die, even when they are 90 years old. Case in point: M Karunanidhi, who by all surveys, is going to face the decimation of his party in Tamil Nadu. An NDTV report on a speech of his in Coimbatore described him telling the audience that this would be his last election. To which, a chorus arose from below: “Don’t say that, don’t say that.” Karunandhi immediately took it to heart and promised, “If you take the oath, I will live not only 10 to 15 years more, but another 50 years, to protect the Tamil race and Tamils.” That is an election promise difficult to implement since he would be 140 years old after 50 years. But then, if the ‘new generation’ in political parties can be one of 60-year-olds, 140 seems an appropriate age to retire.

Narendra Modi may have many abilities, but punning is not one of them. While starting on a speech in Aligarh, he noticed some men trying to climb poles and immediately got to work framing the pun—‘Aap pole pe rise karte ho, yeh akhbarwaale likhte hain Modi polariser hai.’ Loosely translated, that would be: you rise on the pole and then newspapers write that Modi is a polariser. On a scale of one to ten, that pun would be marked two. For one thing, someone rises on a pole instead of climbing it only if someone else wants to use the word polariser in his speech.