Jaitley was silent on specific moves to create new jobs 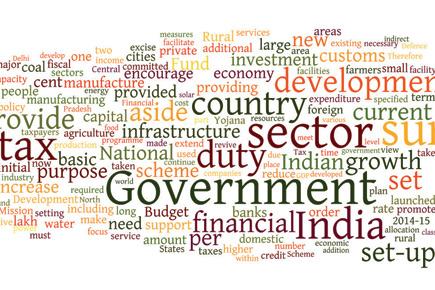 Declining inflation, strong FII inflows on the back of a global recovery, a stable Rupee, buoyant Forex reserves and plummeting prices of fuel prices have provided very favorable economic head winds. Backed by stability on the political front with a clear majority in the Lok Sabha and successes in several state elections, these should have given the Government the confidence to take bold measures and implement radical reform.

The promise of “Acche Din” was linked to two core outcomes

– Make Doing Business in India simpler and thus unleash the entrepreneurial potential of India
– Create gainful employment for the 10 lakh young people who enter our workforce every month.

The analysis below examines the budget in the context of these favorable circumstances and desired outcomes. Though several positive and welcome measures have been introduced, sadly this budget seems to have missed the opportunity to be the truly bold and visionary budget that India needed at this stage.

To start with, we are extremely happy that several Aam Aadmi Party initiatives, ideas and proposals from Delhi Dialogue have been adopted in the Union Budget. A few examples are the adoption of Prashant Bhushan’s suggestions on Black Money; the Pradhan Mantri Vidya Lakshmi Scheme, which mirrors AAP’s Higher Education Guarantee Scheme, the commitment to setup “Plug ’n’ Play” incubator spaces for startups just like AAP’s promise to earmark 30 million square feet for startups in Delhi, etc.

We also appreciate the introduction of Insurance based Social Security Schemes, which provide a much-needed safety net to those at the bottom of the pyramid. Similarly the monetization of Gold through interest bearing deposits will hopefully bring this precious metal out from "under the pillow" into being a productive part of our economy. The Bankruptcy law, a funding institution for MicroFinance, deepening of the bond markets, capital market reforms, and bringing NBFCs under the SARFESI Act are very positive measures.

However, a cause for concern is the way fiscal consolidation goal posts have been shifted. Given the positive head winds of declining fuel, a fiscal deficit target of 3.6% was achievable. The measurement of GDP has itself been thrown under question as Mr. Jaitley gave growth numbers for the current financial year at 7.4% and estimates for 2015-16 at 8-8.5%. However, the revised estimates include a different base year for price changes and new way of calculating GDP at market price rather than factor cost. This camouflages the fiscal numbers and doesn’t give an accurate picture of India’s macroeconomic scenario, something that RBI Governor Raghuram Rajan and Chief Economic Advisor Arvind Subramanian have both been puzzled by.

We are also concerned about this government’s approach to taxation. The lack of a committed timetable and implementation plan for the General Sales Tax (GST) is worrying. The Corporate sector which initially cheered the proposed reduction in Corporate taxes is now concerned that this is yet another promise with no defined timelines. The fine print reveals more onerous compliance, higher costs and penal clauses, which ironically make it much harder to do business in India!

Increased service tax and excise duty, worsen the fundamentally regressive nature of Indian taxation (low direct taxes and high indirect taxes) increasing the burden on the Aam Aurat and Aam Aadmi. In a huge surprise, the Finance Minister seemed to walk away completely from the proposed reform of Direct Taxes. There were minor exemptions for the middle class but no rationalization or simplification of the tax regime, with no concrete measures being taken to widen the tax base or improve our very low tax to GDP ratio.

On the issue of center-state sharing, the 14th Finance Commission and the Union Budget are based on the idea of more un-tied resources and funds to the state, which aligns with the idea of Swaraj and decentralization.

Therefore it would be prudent to point that the transfer of responsibilities to the state governments in many social and development sectors, will not be matched by an adequate increase in their spending capacity, adversely increasing the resource constraints that they face.

Additionally, the Centre will not cover the revenue expenditure incurred at the State level in 24 different Plan schemes like the National Health Mission, Integrated Child Development Services, Indira Awas Yojana and National Rural Livelihoods Mission. This is troublesome for social spending where on addressing infrastructural shortages, a bulk of the expenditure would necessarily be Revenue Expenditure (recurring expenses on staff salaries, textbooks, medicines, supplementary nutrition, and maintenance.) Hence, the total resource envelope for social sectors in the country could witness a decline in 2015-16 unless the States step up the priority for social sector programs in their Budgets significantly.

There was a welcome focus on financing large trade and transport related infrastructure, but important social infrastructure like education and health seemed forgotten.

We were glad to see the Rs1000 crore allocation to the Nirbhaya fund but in the interest of transparency it would have been good for the FM to share information about the fund’s non-utilization for consecutive years and that the PMO itself stopped the directive to create one-stop crisis centers for women. If utilization of funds not a focus, budgeting will regrettably, especially for areas as critical as women's security, remain a pointless farce.

Similarly questions have been raised by Defence analysts on allocations for Defence. At 1.75 per cent of the estimated Gross Domestic Product (GDP) for the coming year, this continues a steady decline over the last two years. The government failed to spend Rs 2,29,000 crore that it had allocated for 2014-15. The revised estimates of Rs 2,22,370 crore for the current year indicate the defence budget remained underspent by Rs 6,630 crore with the spending shortfall appearing to be entirely under the capital procurement head. Ex-servicemen will be disappointed that One Rank One Pension, is missing once again in this budget, despite the commitment made by Shri Arun Jaitley in July 2014.

We are disappointed that many interesting promises from the budget of July 2014 find no mention in this budget. Smart cities, much like the bullet trains, are conspicuous in their absence as also are status updates or further expenditure on the many 100 crore projects which were explained to the public as pilot projects.

Last but not least, clarity on top stated governmental priorities: How and where 10 lakh jobs per month would be created or how India would move up the rankings from its lowly position of 142 on the Ease of Doing Business was missing. Industry leaders have complained that the "pro-business prose hasn’t translated into on-ground policy reality”. Instead of concrete steps to reduce Government and increase Governance, the government announced yet another committee to help Make in India more competitive. We hope that the government doesn’t get stuck in the continuous vacuum of creating committees and not acting on their recommendations.

In conclusion, this Union Budget presented by Shri Arun Jaitley had some interesting solutions to India’s fiscal and economic issues, but didn’t present the reforms that were expected and needed to overhaul India’s economy. A missed opportunity, which under the circumstances, is a real pity. Meera H Sanyal & Roshan Shankar

(Roshan Shankar is a Double Masters Graduate from Stanford University who works full-time at the Aam Aadmi Party. He was the coordinator of Delhi Dialogue, AAP's Policy Initiatve and the Delhi Manifesto 2015.)