Basa fish: The Day of the Ordinary

A bland fish from Vietnam has taken over Indian menus 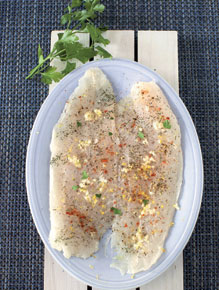 Sometime in 2008, Mukul Jha, then a chef at the Crowne Plaza in Gurgaon, was invited to sample a new fish that some suppliers thought could do wonders in the Indian market. Jha was familiar with the fish, a Vietnamese import called the Vietnamese cobbler, or basa. He had heard of it while working a few years earlier in Birmingham and London restaurants. Then it had been the protagonist of a culinary scandal in national broadsheets and tabloids after fish-and-chip shops across the UK were found to be using not the traditional cod or haddock but this unknown and significantly cheaper imposter. “Fish and chips is like the national dish there. People eat it all day,” Jha says. “So this was a big, big thing.” The scandal even resulted in the lab testing of various samples and the prosecution of several fish-and-chip shop proprietors.

At the sampling in Delhi, Jha found the fish, despite the hype, ordinary and bereft of character. “It was like eating cotton,” he says. “It didn’t have a flavour. It wasn’t like a fish. And whatever spice you added, you just got the taste of the spice but nothing of the fish. It was almost like eating a piece of cloth.” He was certain that it would not work.

His scepticism notwithstanding, in the time that he spent in Gurgaon and Delhi, Jha saw this unimpressive cotton-like fish almost knock every other fish item off the market. It began to be served in dhabas and fine-dining restaurants, as fish tikkas and machhi curries, becoming in a short while the de rigueur fish item at every restaurant or Punjabi wedding in Delhi.

Jha reasoned that Delhi and the rest of north India did not really understand fish. Restricted as they were to the catch of a foul-smelling river that runs through the city, Delhiites was more a chicken-eating people who did not comprehend the subtle nuances of seafood. As he left the capital to return to the city of his birth, Mumbai, he felt a reassuring certainty that at least his home city would never cede space, like Delhi had done, to an unknown Vietnamese import. After all, Mumbai had a wide appreciation of tasty fish—rawa, surmai, pomfret and Bombay duck—and revelled in numerous coastal cooking styles.

Now, just a few years later, the most common fish served at banquets and buffets by Four Points by Sheraton in Navi Mumbai, where Jha works as its executive chef, is basa. The hotel uses it for a wide variety of dishes, from Continental ones like pan-seared lemon fish to an ajwani dum machhi and fish koliwada. “I often suggest to the client which fish would go best with what in our banquets. But these days most guests already come with their mind made up. They say, ‘Oh, but we wanted basa’. You see,” Jha says with a laugh, “you just can’t escape it anymore.”

The story of basa in India is remarkable. In less than a decade, a fish that had little going for it as a delicacy and had never gotten beyond the Mekong Delta has been able to capture the market of a country with a 8,200 km coastline and hundreds of different types of delectable fishes swimming in its many rivers and estuaries.

Unlike its Indian counterparts that are available for raw examination in the fish market, this catfish arrives by ship deboned, de-scaled, sliced up and frozen. From the docks, it makes its way to supermarkets and restaurant kitchens.

The fish hasn’t just taken over Continental and Chinese menus—for which a neutral flavour may possibly help—in India, it has even started working its way into Indian cuisines famous for spicy seafood.

It is now widely used for traditional Indian recipes, from Bengali to Konkani. Restaurants serve basa in the Mangalorean puli munchi and Goan fish curry. In several Irani restaurants, basa is served instead of the more traditional pomfret and also in the age-old Parsi dish of patrani machhi.

Oddly, unlike any other fish in India before, basa been able to unite a wide variety of cooking styles and culture. “The only thing basa can’t do right now is be cooked in a tandoor. The fish is too soft for that. But I wouldn’t be surprised if it manages to do that as well,” Jha says by way of a joke.

Suraj Shetty, one of the proprietors of Mahesh Lunch Home, a chain that serves traditional Mangalorean seafood, says, “No other fish, Indian or international, has captured our different taste buds so quickly. It is really quite amazing.”

The fish was first brought to India in 2008, a year after Yogesh Grover, director of Empire Foods and a seafood importer who had returned to India after working in Africa and Europe, spotted a need for a fish that was neither too expensive nor poor in quality. The fish dishes that he had had in Mumbai and other Indian cities, even in popular fine-dining joints and top five-star restaurants, were too expensive for their quality, according to him. “The way our seafood industry is geared, it is really directed towards the West. The best of the catch [in India] always goes abroad. What we get here is the second best,” he says.

Having witnessed how well basa had done in Europe and America, Grover began to nurse the idea of an imported fish that could challenge its Indian counterparts. He began to wonder, more ambitiously, if basa could gain space in the market and work its way across the country’s assorted recipes. “I tried to get a feel of things. I spoke to restaurants and chefs. But nobody was sure. Few were willing to experiment or risk their business,” he says. “I didn’t know if it would work myself.”

Sometime in 2008, Grover decided to take a gamble. He placed a small order, half a crate of six tonnes of basa fish from Vietnam, knowing that at worst he would make a loss of around Rs 25 lakh. “I was prepared,” he says, “along with friends and family to eating all those six tonnes of fish.”

That order completely changed the culinary scene for fish eaters. In the first year of its import, Grover had to goad restaurants and distributors to give basa a try. But it soon picked up. The importer had imagined it would work instantly with non-fish eating people, such as those in the north, but even consumers in places famous for a fish-eating culture like Bengal and Kerala began to show interest. The country, according to Grover, currently imports around 15,000 tonnes of basa every year. Empire Foods alone ships in between 6,000 and 7,000 tonnes. This then makes it through an intricate distribution network across the country, finding itself in the frozen food section of supermarket shelves and restaurants across urban India.

Speaking as though he is reading out the casualty list of a war report, Grover says, “In the north, the river sole is out. In the west, the pomfret’s and rawa’s reign is over. In the south, the seer is out. In the east, even in Kolkata, the basa is finishing bhetki and catla. I believe all of this right now is a small number. I’m not kidding. I would be surprised if we don’t begin to do around 50,000 tonnes of basa a year.”

Basa comes from a huge family of catfishes that are found in South East Asia. The Mekong River, with its fresh clean water, according to Grover, is one of the most suitable environments for fish farming. In the past few decades, Vietnam has been the beneficiary of an astounding enhancement of efficiency in its marine industry. And basa has been its global winner. “They fillet it, freeze it and package it so well that you can send it half way round the globe and you can never tell it isn’t fresh,” says Grover. “I’ve seen units in Vietnam that do around 500 tonnes per day.”

That efficiency translates to the principal reason for basa’s rapid rise to prominence in India. It is, as the Mumbai-based restaurateur Meldan D’Cunha who runs Soul Fry and The Local points out, an amazingly inexpensive fish. While 1 kg of raw pomfret costs around Rs 550 in Mumbai, the same quantity of basa fillets sell for just Rs 250.

Next, consider the convenience. Unlike other fishes that need to be deboned and descaled, basa comes in packets of frozen fillets and has no wastage. It doesn’t smell, and when you cut into it, all you see is an unblemished whiteness underneath. “Before basa came, you were dependent on the season and what the sea throws up. You had to pray that the quality of the fish was good,” D’Cunha says. “But with this, what you have is an uninterrupted year-long supply of fish whose quality you are certain of.”

“You hear a lot about how basa lacks character,” Grover says. “But you have to understand that the fish is really versatile. You can do it so many ways. And at that price-point, you won’t get a better, tastier fish anywhere. Basa has conquered Europe. It has been accepted in the US. It was only a matter of time that it did so here too.”

According to Jha, one of the most important factors driving basa’s success is its lack of smell. It doesn’t quite taste like a regular river fish, but it doesn’t smell like sea-fish either. “It’s quite bland to someone like me. But to many others, it is the best of two worlds—it is like eating fish without having to deal with its smell,” he says.

For several years, Suraj Shetty was contemptuous of people who complained about the smell of fish. He would tell them, “But it is supposed to smell of the sea or the river. What else will it smell like—chicken?”

Mahesh Lunch Home, which started out in the 1970s in South Mumbai’s Fort area to cater to a Mangalorean seafood- eating clientele, was initially hesitant to adopt basa. But almost every dish it now has on the menu is also available in basa.

“We don’t push it,” he says. “We believe a true seafood lover would never ask for it.”

“Because… what do I do? People keep asking for it.”