Conversation with a Heretic 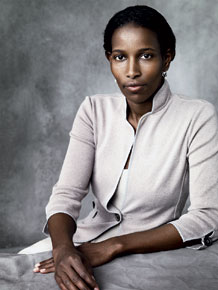 Within minutes of my last meeting with Ayaan Hirsi Ali—and I’ve had several since she took political refuge in the United States in 2005—a thought hit me like a hammer: Her face, sculpted and compelling, must disconcert the radical mullahs, the jihadis, the Wahhabis and the ‘fundos’ almost as much as her words do. It is a face that commands you to look at it, the face of a strong woman made luminous by a conviction that she is right. For an undeniably beautiful woman to say such infidelic things, to utter such adamant heresies, must be, for some, the very definition of hell. She speaks; you listen; you look; you burn. If this isn’t diabolical torment, what is?

We met in March, on a pitiless late-winter’s day in Boston. I’d taken the fast train up from New York to interview Ayaan (I will use her first name since I know her well). She lives in the Boston area and is married to Niall Ferguson, a celebrity-historian on the faculty at Harvard. Marriage has softened her edges, I thought to myself, as we settled into a discreet corner of a hotel restaurant. As I’d entered the lobby, a man in a suit had approached me to ask if I was “Tunku Varadarajan”. He pronounced my name impressively well, and he was (I surmised) from Ayaan’s security detail. She has round-the-clock protection, for hers is a life in danger.

The radical Islamist who had, in broad Amsterdam daylight in 2004, murdered Theo van Gogh, the filmmaker with whom Ayaan had collaborated on a film critical of Islam, had stuck a note to Van Gogh’s body with a knife, using the bleeding corpse as a bulletin board. The note promised a similar death to Ayaan, who was then a member of the Dutch parliament, having fled Somalia—and a forced marriage to a much older man— some years before. Arriving as a vulnerable refugee without a word of the local language, she had reinvented herself as a crusading, Cartesian enemy of radical Islam. Even without Van Gogh’s murder, hers was a remarkable story, one of guts and toil and assimilationist ardour. Suffering from the multicultural disease with which the West has injected itself, many liberals in the Netherlands were wildly suspicious of her desire to integrate, to put behind her the social and cultural horrors of her past.

In wanting to be Dutch, and wanting it so badly, she embarrassed them. One has to wonder, sadly, whether Ayaan misunderstood what it means to be a modern Dutch citizen.

Ayaan had just published her fourth book when we met in March. I was interviewing her for Women in the World, Tina Brown’s new website affiliated with The New York Times. Ayaan’s new book is called Heretic: Why Islam Needs a Reformation Now. Poetically, her middle name—Hirsi— sounds like ‘heresy’. Ayaan Heresy Ali, I thought, chuckling to myself as she shivered in the cold that had penetrated the old hotel. She ordered hot tea with lemon. It was just after noon, but she didn’t want anything to eat, not even the cookies that the waitress placed before us, on the house. “It is my most intellectually ambitious book,” she said, sipping her tea and thawing with each sip.

Is it also the most provocative of her books? I asked. Pre-publication snippets had highlighted assertions in the book that would make many Muslims blanch, and not merely the most fundamentalist. She writes, for instance, that Muslims must abandon their belief that Muhammad was infallible, and that the Qur’an is the word of God. This struck me as a challenge to the very core of Islam. Ayaan accepted—with a smile that was not without an element of glee—that her book was provocative. But not as provocative as “Chapter 16 of Nomad”—her third book—“where I urge moderate Muslims to become Christians. But this one is provocative in a different way. It argues that Islam has to reform.”

Therein lies the central heresy of Ayaan’s thesis, as many Muslims would see it: In calling for reform, she is seeking to improve that which is already perfect. But the Ayaan of Heretic is very different from the Ayaan who wrote Nomad. She is more optimistic now, believing not merely that Islam must be reformed—a matter on which few rational people disagree—but that reform of Islam is, in fact, attainable.

Ayaan has an impressive—some would say touching—faith in the power of reason. Last month, at a book party for her at the home of Tina Brown and Harry Evans, a Muslim guest took issue with her, berating her for saying the things she did. As the assembled throng started to murmur its unhappiness with the man, with some calling for him to pipe down, Ayaan came to his defence, stressing that he needed to be heard. “This is America,” she said—as told to me by one who was there—“We are all allowed to speak our minds.” And in doing so she defused all awkwardness. (“Her charisma was undeniable,” said the person of my acquaintance who was present at the party.)

A problem surrounding Ayaan in the West is that the Right tends to accept everything she says uncritically, seeing her as a sainted person who speaks the truth, the whole truth, and nothing but, while the Left is implacably hostile, deaf to almost everything she says, and dismissive of her as an ‘Islamophobe’, which in some circles carries with it the stigma of a child molester. So I made sure to ask her, that morning in Boston, whether she was making a tactical error in her call to Muslims to see Muhammad as fallible, and in her rejection of the Qur’an as the word of God. Is there not a danger that some of these assertions would shut down debate at the very outset, and that far too many non-absolutist believers—the ones she calls ‘Mecca Muslims’ in her book—would be too scandalised to continue a constructive conversation? Shouldn’t she (in other words) have toned things down just a bit?

“I think some people will shut down,” she conceded, “but here is another paradox. Some people will shut down because of the dissonance I describe, between professed belief and practice.” ‘Mecca Muslims’—the passive majority of the world’s Muslims—“are challenged by modernity. The more they adopt a modern lifestyle and make use of modern means, the more their behaviour, their practice, is removed from what they believe. And you don’t want to be constantly reminded of that dissonance.” It is becoming increasingly difficult, with groups like ISIS around, for the Mecca Muslim to stick his head in the sand and “pretend that nothing is happening. It used to be possible. In 2010.”

That was just before the Arab Spring, about which Ayaan is “still very optimistic” in the sense that “we saw masses of young people stand up to absolute authority.” The kind of questions they were asking were way “beyond economic demands, the sort of questions that ultimately lead to not just the reform of the government system, but the reform of religion. Because remember, in Islam, religion and politics is intertwined. So once you start questioning the despot and ask ‘Where did you get this idea that you’re the absolute authority?’… it’s a Pandora’s Box.”

“Is it possible to separate religion from politics in Islam?” she repeated, rhetorically. “I’m not saying, ‘Don’t worship Allah.’ I’m just saying, ‘Don’t take the Qur’an and use it like the Massachusetts manual for driving.’ And that’s what ‘Medina Muslims’ (her phrase for the inflexible radicals) want us to do.”

Here, Ayaan built up an impressive—and righteous—head of steam, for it is the radicals who have distorted (and sought to end) her own life. She offered this message to moderate Muslims: “Instead of saying the Medina Muslims are wrong in this, follow your conscience as a Muslim and accept that some of what Allah supposedly said is morally unacceptable, that the book came about in the 7th century, the 8th century, a time of completely different morality.”

Not just Muslims, she continued, but all human beings, adhered to different moral precepts. “In the case of Muhammad, when you see a very extreme group like ISIS wage jihad, enslave women, behead people… And when for every action that we find atrocious, they find a justification in Muhammad, remember [that] Muhammad took slaves and Muhammad beheaded people, and ordered his followers to do so. It really doesn’t help to run away from the fact that Muhammad did these things. Muhammad married a nine-year-old.”

I should recall, here, an episode that occurred back in 2010, shortly after Ayaan had published Nomad. I was in Washington, a place where a majority of taxi drivers are East African, many of them Somali. As luck would have it, my cabbie that day was from Mogadishu, and after a few minutes of the usual banalities that pass between driver and back-seat passenger I mustered the will to ask him a meaningful question: What did he think of Ayaan Hirsi Ali? I had assumed that he’d know who she was, and my assumption was correct. He glared at me and said, “Very bad person. We think she is a bitch. We hate her.” (I describe this incident in a review I wrote of Nomad for The Daily Beast in May 2010.)

Even in the United States, far from the cultural discordance of Europe and farther still from the cauldron of Somalia, Ayaan runs the risk of encountering hostile Muslims. At our meeting in Boston I asked her whether the US, too, would one day find itself with a ‘domestic’ Islamist problem of the sort that exists in Britain, or France, or Belgium. “In terms of absolute numbers,” she said, “the number of Muslims who will come, who plan to come, to the United States, will be way more than the number of Muslims in Europe. We’ve already seen some incidents here in the US, so America faces the same challenges as Europe.”

Yet, America has an advantage, and Ayaan first wrote about this advantage in Nomad. ‘America is an idea, it’s not an ethnicity, and so it’s easier to become an American than it is to become, say, Dutch.’ But Ayaan took care to add an important caveat, a warning. “At the same time, America also has to show the confidence in its own values. And that means dealing with the infrastructure: Muslim schools, Islamic centres, mosques, the stuff online. There is an infrastructure that promotes dawa [the proselytizing of Islam]. And I’m not even talking about violent extremism, but non-violent extremism, the ideas that ultimately lead to an attraction to the Muslim Brotherhood.”

Ayaan insisted that America has to challenge the dawa in its midst, if it is to avoid Europe’s condition. “I’m not saying that we have to close down mosques, but we [should] target Muslims and the Muslim community with better ideas, superior ideas, and tell them that you are here because there’s freedom, and that the language and vocabulary of freedom and tolerance is superior to the vocabulary of damnation and submission.”

And with that the man in a suit appeared—her chivalrous special agent—indicating that our time was over and that she had to be elsewhere. I stayed behind, finished the fine cookies that had been neglected amid all the talk of Mecca and Medina, and then stepped out into the Boston snow. The weather was horrid, the ground slick and treacherous. But I could go as I pleased, footloose and fatwa-free.


Ayaan Heresy AliHeretic: Why Islam Needs a Reformation NowIslamMuslimsreformationWomen in the World