Avinash Chandra’s work is riveting, often for its shocking amorality 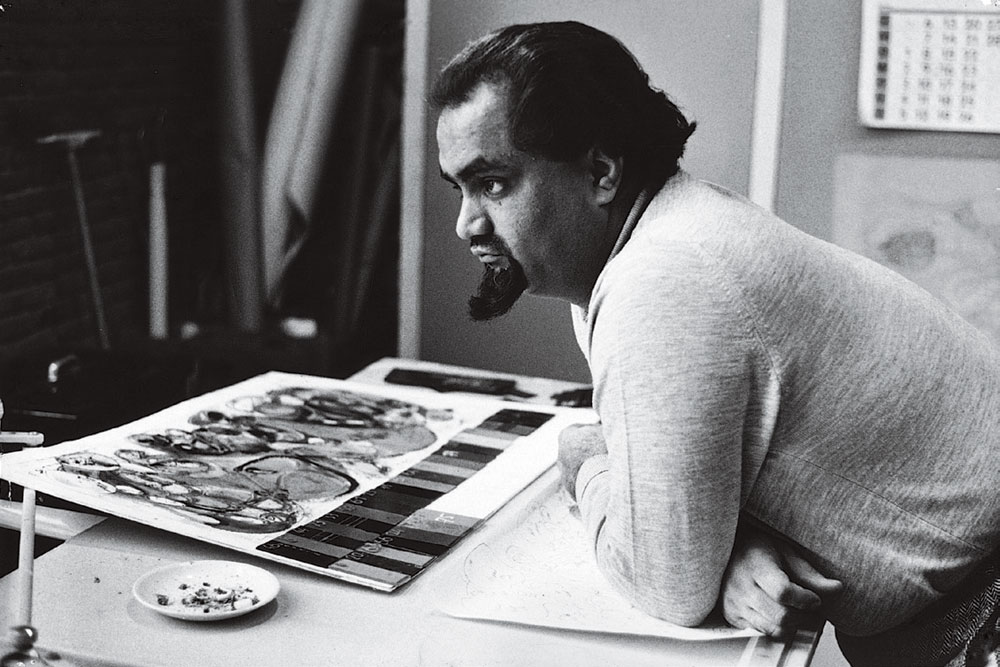 ONE OF THE finest stalls at the India Art Fair 2016, for me, was the mini pop-up ‘museum’ set up by Delhi Art Gallery (DAG), recently christened DAG Modern. And a museum of sorts it was, no doubt. Unlike the spectacle of avant-garde contemporary art displayed at most of the surrounding galleries, DAG Modern’s offering was seemingly understated, in fact almost sedate, even though it occupied a good deal of floor space, comprising mostly paintings and sculptures by the crème de la crème of 20th- and 21st-century Indian art. Yet, in spite of the familiar media and the big names, the work it had brought together was remarkable—not only for being aesthetically outstanding but also for the intellectual rigour and coherence with which it had been presented.

Since its start nearly two decades ago, and especially over the last one, DAG Modern has been among the premier institutions instrumental in shaping the ‘canon’ of modern Indian art. From the Old Masters to the moderns, the range of artists in the gallery’s roster has been staggeringly diverse. But more importantly, this diversity has been put to the service of evolving a discourse of Indian art that is inclusive of all kinds of consumers, whether experts, connoisseurs or plain enthusiasts. In spite of being a commercial gallery, DAG Modern has focused on showing bodies of work, in solo or group exhibitions, which qualitatively add up to a thesis or trace the arc of a historical idea (for example DAG’s controversial exhibition, ‘The Naked and the Nude’, in 2013) or simply exhume a talent that has been relegated to the realm of public amnesia.

DAG Modern’s current show, a retrospective of the paintings and drawings of artist Avinash Chandra, on till 31 May, belongs to the last category. ‘Humanscapes’, as the exhibition is called, comes with a handsome volume of the same name, documenting the richness of the life, times and career of this brilliant but forgotten artist. At the heart of the book is an excellent essay by Kishore Singh, the head of exhibitions and publications at DAG Modern, who puts this little-known artist and his fascinating oeuvre in a socio-historical perspective. If the book is beyond your budget (at Rs 6,000), you will find enough wall text to help you navigate among the exhibits. And even if you are not particularly keen on history, Chandra’s work alone is riveting, often for its shocking amorality, to keep you arrested.

Born in Simla in 1931, Chandra moved to London in the 1950s, spent some time in Europe and America, before returning to England, living in India only briefly until his premature death in 1991. In his 60 years, he created a body of work that could easily reckon with the legacies of his exalted contemporaries, even though it would never gain much public currency in the country of his birth. A cursory glance at Chandra’s early work, mostly brooding cityscapes rendered in dark and melancholic hues, would make his affinity with Francis Newton Souza evident. But while we remember Souza’s crumbling edifices or Ram Kumar’s cubist patches of colour vividly, even iconically, few of us would be aware of similar paintings made by Chandra after the manner of these masters. Nor would many outside the cloistered world of art practitioners, historians and collectors know of his singular preoccupation with the female nude in the later phase of his career.

The simplest conjecture behind Chandra’s relative obscurity in the history of modern Indian art would be his life in exile. That reason alone, however, does not hold up well when there are examples of other Indian artists—Souza and SH Raza being the most prominent ones— who thrived in India despite spending most of their adult lives away from the country. In Singh’s piecing together of Chandra’s personal story, through interviews with those who knew the artist intimately, the one adjective that comes up repeatedly to describe him is ‘arrogant’. And in this word, it seems, rests the clue to the puzzle of this disappearing artist. For not only did Chandra care little to spend time in the country of his origin, he didn’t even try hard to cultivate the circle of friends and foes, critics and connoisseurs who keep the wheels of the art industry in India, especially in the Capital, in motion. During his brief and infrequent visits to the city, he seemed patronising, even indifferent, to trends in Indian art. His compatriots seemed to have reciprocated the feeling.

Ironically, it was in Delhi that Chandra started his career as an artist, joining the Delhi Polytechnic, before it became the College of Art, much to the consternation of his middle-class family. His father was the manager of Hotel Cecil in Delhi’s Civil Lines. Young Chandra grew up in that institution, imbibing some of the hauteur and patrician characteristics of its largely colonial clientele. He briefly taught at his alma mater, including a few illustrious students like Paramjit Singh, Arpita Singh and Gopi Gajwani, who would go on to attain global fame. In 1956, Chandra joined his wife Prem Lata in London, where she had been offered a scholarship to study art. The move proved to be permanent, though, like Raza and Souza, Chandra held on to his Indian passport.

The 50s and the 60s were decades of ferment in modernist art and literature across Europe. Chandra, who was intellectually daring and dashingly handsome (in an early photograph he looks like a young Dilip Kumar), fitted seamlessly into that world. He grew a Dali-like beard, hung out with the outré crowd, and dabbled in a variety of styles that were a far cry from the realist flavour of his early work. His first show at the Delhi Silpi Chakra in 1953 had drawn attention. One of his paintings had also won a prize at the National Gallery of Modern Art. But his true flowering into an individual idiom began in London, continuing through the years he spent in Europe and America.

In spite of the palpable influence of Picasso and Paul Klee on his work, Chandra remained profoundly aware of his origins. ‘English churches and their Gothic spires reminded me of Hindu temples of the type you find in Khajuraho,’ he said. The luscious sexual imagery of his later work would be attributed to tantra and other assorted eastern philosophies. But these two seemingly opposing cultures were firmly intertwined in his art, which was the product of an imagination furnished by the best of both these worlds and their values.

Chandra’s creative life, as with most artists, nourished itself on the vicissitudes of his existence. The illness and death of his first wife, his years of wild partying in America, his second marriage to the Jamaican actor Valerie Murray, and his own failing health affected his work directly, even viscerally. But at the core of his art was a commitment to formalism, not necessarily used as a means to clarify an idea but rather as a tool to complicate it.

If we study Chandra’s progression from the early cityscapes to his depiction of the body’s deepest, darkest mysteries, we can sense a subtle shift of paradigm. The measured audacity of the initial years, marked by a confident but restrained use of colours, appears to give way to a wild abandon, where brushstrokes dance freely and lines twirl in a frenzy. There seems to be an attempt to move away from geographical specificities—be it in the imagining of the cluttered life of an Indian metropolis or the emptier public domain of a Western city—to the exploration of the human body and its universalising qualities. Over the years, the torsos in Chandra’s work get captured in multiple poses: they are twisted beyond recognition or fused with a violence that seems to exceed the passion of sexual coupling.