Anatomy of the Gandhi Enigma 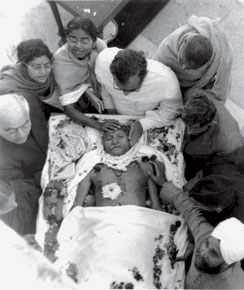 Those who fought for India’s freedom, our greatest generation, first and foremost, lived lives marked by sacrifice— a spirit that is often missing in our lives today. That sacrifice, as defined by Rabindranath Tagore, who gave Gandhi the name ‘Mahatma’ is this:

‘What, then, is the true meaning of sacrifice? It means that for human beings, the life of the body is not the best life, but the life of the soul. The material world which we share with the animals, is not the only world. We have higher needs, because we have a deeper and a higher life hidden within us. That hidden life is immortal. Our physical life has its immortality. Only those human beings, who can get rid of the sheath of self, can reach that immortality. They must lose their separate self in order to realize the infinite. They must become Dwija-twice born; born of the spirit; born into the light.

They who realize the Infinite in themselves become immortal.’

Pramod Kapoor’s illustrated biography of Gandhi brings home vividly the spirit of selfless sacrifice through which men such as Mohandas Karamchand Gandhi achieved that realisation of the infinite in themselves, and through that realisation, awakened India to freedom. This was not merely a spiritual journey to immortality but a powerful deployment of an exquisitely balanced political vision embedded in the warp and weft of Indian life. Kapoor’s effort strives to pass the ‘test of authenticity, factual research and corroboration’ as he himself puts it, and he has no fear ‘while writing about Gandhi’s personal life, which had darker shades too.’ He approaches the task with the fervour of the committed scholar, reading 97 volumes of The Collected Works of Mahatma Gandhi in preparation for this work.

While this is a pictorial account of the life of Gandhi, there is no escaping the complexity of the character that emerges from the pages, the myriad contradictions inherent in this great man. Even Tagore, despite the reverence with which he held the man, disagreed with him on the Non-Cooperation Movement and the burning and boycott of imported cloth. Kapoor notes that a different psychological study is required of Gandhi’s relationship with his family, and perhaps the most poignant and moving pages in the book are about Harilal, the eldest of Gandhi’s children, and the tragic outcome of the father’s application of extreme objectivity in the treatment of his first-born.

Kapoor’s study throws light on some fascinating aspects of Gandhi’s life, including its everyday aspects illustrated by photos of the Father of the Nation being ambidextrous—using both left and right hands for writing. This reviewer noticed this on a visit to the headquarters of the World Food Prize in Des Moines, Iowa two years ago. There is a picture in those precincts of Gandhi and George Washington Carver, the African American professor of great distinction who, between 1929 and 1935, carried on a correspondence with the Mahatma on the consumption of nutritious food. The painting in Des Moines shows Gandhi as left-handed as he writes to his American friend, seated side by side with Carver who is also shown penning a letter.

There are numerous vignettes in the book of Gandhi’s encounters with his adversaries and the personal, human touch he brought to even these difficult relationships (with General Smuts who wore a pair of sandals Gandhi made while in prison in South Africa for many years before returning them to him with the line that “I am not worthy to stand in the shoes of so great a man”). Today, as the country is in the throes of a debate on whether government awards should be returned by those who are not in agreement with certain policies, one is reminded how in August 1920, during the Khilafat Movement, Gandhi returned three medals—the Boer War medal, the Zulu War medal and the Kaiser-i-Hind Gold medal—awarded to him by the British Empire saying he could “not wear them with a clear conscience as long as my Mussulman countrymen have to labour under a wrong done to their religious sentiments.”

It is not very well known that in November 1921, when the Prince of Wales visited India and Gandhi gave a call for a hartal, it was observed by all except Eurasians, Parsis and Jews who came out to welcome the royal visitor. Mobs attacked them and there was a riot in Bombay. Gandhi was deeply shocked by the extent of the violence. The riots exposed to him the ‘social, political and communal tinderbox that India was in danger of becoming’ and represented to him the failure of his non-violent Non-Cooperation campaign.

“The army of my sweethearts is increasing,” Gandhi said in reference to the numerous women who became his dedicated followers. Indeed, women pioneers of the freedom movement like Hansa Mehta, Sucheta Kripalani, Sarojini Naidu, Kamaladevi Chattopadhyay among others became torchbearers for the empowerment of women in independent India. On page 174 of the book, there is a rare picture of Kamaladevi with Kasturba Gandhi during the Salt Satyagraha although Kapoor identifies her mistakenly as one of the ‘fellow warriors’ wives’.

There are also glimpses in the book of the astute businessman and fund-raiser that Gandhi was (“I have come to do business” he would state unabashedly, even charging for autographed photographs of himself). Many years ago, the late Siddhartha Shankar Ray recounted to this reviewer a story from his own childhood when Gandhi was a visitor to the household of his maternal grandfather Chittaranjan Das and beheld the two-year-old Siddhartha adorned with gold ornaments. Holding the toddler in his arms, Gandhi proceeded to remove the ornaments one by one, setting them aside saying, “Now behold the baby in all his beauty; he needs no jewels, which we will use for the cause of India’s freedom.”

Of great poignancy are the pages in the book detailing the death of Kasturba which vividly illustrate the spirit of sacrifice that marked the life of this remarkable woman who through her stoic and steadfast presence provided strength and support to her husband throughout their marriage. The picture of Gandhi seated by the side of her body after her demise is heavy with sadness. Days before her death, Kasturba had been overcome by deep grief seeing the inebriated state of her son, Harilal. He was not present at her funeral. Their youngest son, Devdas lit his mother’s pyre and Gandhi kept vigil over his wife of 62 years, until the last flame had died. Miraculously, the five glass bangles that she had worn through her married life were found intact when her ashes were gathered by her sons Ramdas and Devdas four days after her cremation.

Kapoor devotes a number of pages to epochal events in India’s freedom including the Salt Satyagraha, the Round Table conference, the Cripps Mission, Quit India and the Jinnah-Congress divide that led to Partition. The reader is thus witness to a moving montage of images detailing the circumstances surrounding that epic struggle to achieve independence from foreign rule. The section on Gandhi and 15 August 1947 is particularly evocative. The day dawned for Gandhi in an old run-down Muslim home in Calcutta; he fasted and had the entire Gita recited in memory of his late secretary, Mahadev Desai. Hindu and Muslim volunteers provided his security and his Muslim hosts had decorated the house with the Indian tricolour. In the pre-dawn darkness, groups of young girls arrived singing songs from Tagore outside the window of his room. It was a beautiful beginning to the day. There was no rioting in Calcutta even as Punjab burned with Partition riots. But Gandhi did not see 15 August as Independence Day—he regarded it as Partition Day—a partition that he was bitterly opposed to.

Gandhi often spoke of living up to 125 years (like Lord Krishna) but he also was seized by strong premonitions of his own mortality and death. He did not wish to retire to the peace of the Himalayas but to live and die amidst the turmoil of post-independence India. He could not be a false mahatma by any measure or definition. ‘Ho manavi, na Leje visramo’—as the Gujarati bhajan he loved, said: ‘Whether tired or not, o man do not take rest, stop not, your struggle.’ Kapoor’s description of Gandhi’s last day, up until those fateful minutes after 5 pm on the 30 January, 1948 is detailed and descriptive, bringing alive the unspeakable and terrible sadness of the time. Particularly impactful is the picture of the assassinated Gandhi, blood splattered on the white of his clothes and cradled by his aides (the bullet wounds, dark, ominous patches of hate and madness as the broadcaster Melville de Mellow termed it), shock and consternation writ large on their faces. Sixty-eight years on, that picture speaks a thousand words. The loss stemming from that saddest hour is still immeasurable. As Nehru told Manu Gandhi as Gandhi’s funeral rites were being performed, we are still hoping that the country’s beloved Bapuji wakes up.