An Interpretation of Dreams

Christopher Nolan’s Inception is a disturbing puzzle about the difference between dreams and reality. It is guaranteed to achieve cult status. 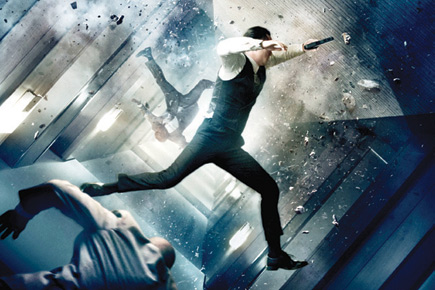 Christopher Nolan’s Inception is a disturbing puzzle about the difference between dreams and reality. It is guaranteed to achieve cult status.


Whether you like it or not, Christopher Nolan’s Inception will be the most discussed, analysed and dissected film of this decade, and gain the uber-cult status that The Matrix trilogy enjoyed. The film, about dream stalkers, is a puzzle wrapped in a riddle swaddled in enigmatic throwaways that may lead to a coherent conclusion or not. It is a challenge to the audience that makes no compromises, even when you suspect that the writer-director may himself not be too sure whether it’s all making sense. He has this mad vision, which he is crafting as meticulously as a watchmaker. Will the watch tell the real time? Nolan keeps us in the dark, even with the film’s last shot of an iron top which we do not know will topple over or continue to spin for ever. Which, according to the film’s premise, should tell us whether what we are seeing is happening in reality or in a dream.

The reviews have been mixed: Roger Ebert has given it all the four stars at his disposal, the NYT is a bit confused and our own reviewer has used the word ‘psychobabble’. Leonardo di Caprio leads a team that enters people’s dreams and steals their ideas, except that this time, he has to insert an idea and make the dreamer think it’s his own. But when you enter someone’s dreams, you don’t have full control of the territory. So, as they fight it out in the first level dream, the dream hunters also drill themselves into deeper levels of dreams that can burrow into the most vulnerable levels of the quarry’s subconscious. So action happens simultaneously at three dream levels and ‘in limbo’, the interstitial space between the levels. And di Caprio’s subconscious, haunted by guilt over his wife’s suicide, puts a spanner in the works of the best-laid plans, as she appears at will to disrupt the assignment.

Nolan’s work (Memento, Insomnia, The Prestige, The Dark Knight) is characterised by the director playing God, as he puts together a pitiless jigsaw to confound the audience. This time, he has built a giant brainteaser that asks the question that has harried philosophers since time immemorial: the difference between dreams and reality.

Are we all part of someone’s dream? As Hindusim would remind you, Lord Vishnu is asleep on the great serpent, Ananta, which floats on the universal Milky Ocean. Vishnu sleeps, and dreams of us. So is hunger real, is pain an illusion, is the death of a loved one a scripted fade-out? In Inception, Nolan shreds that clichéd material called the fabric of reality and puts together a patchwork quilt that may or may not exhibit a reasoned pattern. It is almost impossible to crack the conundrum.

Yet, it is a frightening concept. You have no possession more personal, more uniquely yours than your dreams. If those could be stolen, you are violated at your innermost. One is sure the thought has crossed the mind of many totalitarian dictators, for dreams are a realm censors cannot reach, and reveal more than we ourselves ever can. Inception is a science-fiction action thriller, with enough car chases and explosions and special effects to satisfy the casual thrill-seeker, but it disturbs. And not least because the central question of dreams versus reality is answered so ambiguously.