A Tale of Two Shoe Throwers 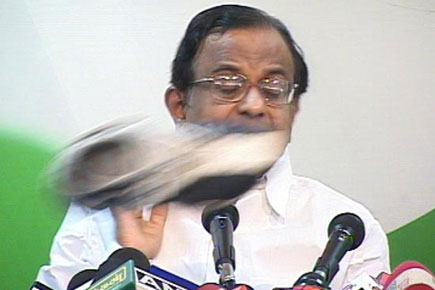 A shoe can travel many hundred kilometres in its lifetime but one thrown against the most powerful man on earth will never stop its journey. The brand and the make might be different but what went hurtling in 2008 towards the then United States President George Bush in Iraq is still in motion today. On Sunday, the shoe came to a rally in Sirsa and took flight in the direction of Haryana Chief Minister Bhupinder Singh Hooda, thrown by a villager called Raja Ram.

By itself, this event should not merit our attention. Hooda, after all, is used to it; in 2010 also a shoe had been thrown at him. What makes it interesting is that on Sunday itself, the Aam Aadmi Party came out with its first list of Lok Sabha contestants and one of the 20 was Jarnail Singh, the man who introduced the shoe throwing revolution in India. That fateful day in 2009, he had been a regular journalist covering a press conference of the then Home Minister P Chidambaram when, unsatisfied with an answer on inaction against Jagdish Tytler in the 1984 Sikh riots, Singh took off his shoe and flung it towards his host.

Consider the irony in all this: a thrown shoe turns a common man into a public figure to the point that he gets a Lok Sabha ticket with decent odds of victory and, furthermore, on the day that he formally enters the electoral fray, a stranger from a village in Haryana performs the same act—it is as if the universe was conspiring to get a shoe thrown for Jarnail Singh.

There are a couple of things to shoe throwing. The first is that the shoe will always miss. Over the last four years, shoes and chappals have been thrown at LK Advani, Rahul Gandhi, Arvind Kejriwal and Manmohan Singh. Never once have they found their mark. Sometimes it has landed so far away that the target did not know that he had been attacked until the newspapers told him the next day. The shoe hurled at Hooda on Sunday did not even make it to the dais where he was standing. In its YouTube video you can see the black slip-on lying forlorn on the ground with a man—not Hooda—on a chair next to it shrugging his shoulders at the presence of this new neighbour.

Another rule is that shoes will always be thrown in public functions when cameras and reporters are present. The dream of the shoe thrower is for the entire act to be captured on film, but given the surprise necessary he can’t advertise his plan. Usually, the footage is therefore of the man being beaten up or led away by the police. However, the purpose is served; his name makes it to the front pages and reading it the next man with a shoe-throwing gene feels a tingle go up his spine.

When Jarnail Singh threw that shoe, it was impulsive but still a genuine protest. He was clearly moved by pent-up anger over the absence of justice in Delhi’s anti-Sikh riots. Circumstances from then on dictated his journey to this point in politics. The shoe throwers in India who followed him are alas made of a different mettle. Raja Ram is a man with political ambitions; he stood as an Independent in the last Assembly polls. Singh became a politician because he threw a shoe. Raja Ram threw a shoe because he is a politician. The shoe is still travelling, but it is upside down now.