A Relative Question of the Ascetic

Adi Shankaracharya and the idea of a sannyasi 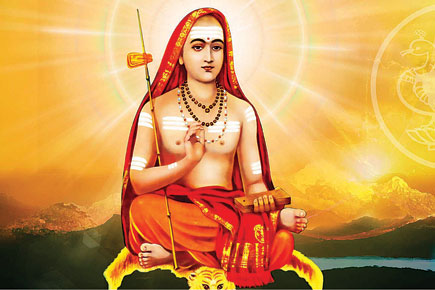 This is a shloka from the Bhagavad Gita (BG). Actually, it is one and a half shlokas, shloka number 26 and half of shloka number 27 from the firstChapter. By the way, almost everyone refers to the text as Bhagavad Gita and so have I. That’s grammatically wrong. Following rules of sandhi, one should either say Bhagavat Gita or Bhagavadgita. Before the battle, Arjuna asks Krishna to station the chariot between the two armies, so that he can see who he has to fight with. That’s when this shloka occurs and one has a list of father, grandfather, preceptor, maternal uncle, brother, son, grandson, friend, father-in-law and well-wisher. That more or less covers every masculine relative one can think of. A few shlokas later (shloka 34 to be precise), there is another such listing and that adds brother-in-law and matrimonial ally. Who am I? Confronted with such a question, we often define ourselves in relation to our masculine or feminine relatives. I am someone’s son/daughter, father/mother, brother/sister, spouse and so on. Incidentally, the word बन्धु (bandhu) is often used in the sense of friend, but is really a relative related by blood. बान्धव (bandhava) is a distant relative or kin, or even someone related by marriage. Depending on the gender, सखा (sakha) or सखी (sakhi) is friend. Though used in the sense of friend, मित्रम् (mitram) is more like colleague. However, since usage isn’t always invariant, let’s not bother about the taxonomy.

“You can choose your friends but you sho’ can’t choose your family, an’ they’re still kin to you no matter whether you acknowledge ‘em or not, and it makes you look right silly when you don’t.” That’s Harper Lee in To Kill a Mockingbird. We kind of accept that as life progresses, we make friends and lose them. This doesn’t necessarily mean we have fights with them, though that also happens. We just drift apart and go our own separate ways, without necessarily quarrelling. There is a reluctance to accept this for relatives, though the principle is the same, even though the link through blood cannot be wished away. The Mahabharata has an image of logs floating on the ocean. They come together for a while and then drift apart.

There is a famous composition attributed to Adi Shankaracharya (the customary date is 780-820 CE). It usually goes by the name of भज गोविन्दम् (worship Govinda). It also goes by the name of मोह मुद्गर (moha mudgara, or club used to shatter illusion). There is a reason why I used the word ‘attributed’. You will find different renderings/texts of bhaja Govindam. Usually, there will be 26 shlokas, but sometimes there may be an additional five shlokas, bringing the total to 31. The 26 shlokas are divided into two groups of 12 + 14. The first set of 12 is referred to as द्वादश पञ्जरिका (dvadasha panjarika). Dvadasha means twelve and panjarika is a cage. You may also find references to this as dvadasha manjarika, with manjarika meaning a flower, especially of the tulasi plant. The second set of 14 is referred to as चर्पट पञ्जरिका (charpata panjarika). Charpata means rags. The sense is that we are clothing ourselves in valueless and tattered rags, we are binding ourselves into a cage. The story is that Adi Shankara didn’t compose the fourteen verses of charpata panjarika himself. Instead, he got fourteen of his disciples to compose one shloka each. We will probably revisit bhaja Govindam in the future. For the moment, I want to focus on a few of its verses. These are familiar shlokas and you may have heard them without knowing about the antecedents.

There are similar sentiments in other compositions by Adi Shankaracharya, such as निर्वाणषटकम् (nirvana shatakam).

न तातो न माता न बन्धुर्न दाता न पुत्रो न पुत्री न भृत्यो न भर्ता ।
न जाया न विद्या न वृत्तिर्ममैव गतिस्त्वं गतिस्त्वं त्वमेका भवानि ॥
Or in Bhavani ashtakam, eight verses to Bhavani. I have no father, no mother, no bandhu, no one who gives to me, no daughter, no son, no servant and no master (alternatively husband). I have no wife, no learning and no means of subsistence. O Bhavani! You are my refuge. You alone are my refuge.

It is easy to argue that such sentiments are easy for a sannyasi, an ascetic and a mendicant who has given up family and household and has nothing to do with worldly affairs. However, the word sannyasi doesn’t necessarily mean an ascetic and a mendicant. Any person who has placed himself (न्यास, nyasa) on the path of virtue and truth (सत्, sat) is a sannyasi. Those Adi Shankara verses raise major ‘spiritual’ issues that we will return to later. A template of virtuous behaviour exists for the householder too, just as it does for the ascetic and mendicant. In that template, should one differentiate between a relative and a friend? Should one differentiate between a relative or friend and a completely anonymous person? Let’s place that question on hold too. For the moment, we are on the question of defining ‘I’. Who am I? In searching for a meaning to life, we focus on what we are seeking. However, before we pin down the sought, we need to pin down the seeker. The two are linked and differences blur. In defining ‘I’, there is the clichéd image of slicing away layers of an onion. One layer of that onion is an attempt to define ourselves with respect to our relatives, more rarely, with respect to our friends.

Consider the father and mother. The words पितृ (pitri) and मातृ (matri), or their variants in vernacular languages, are the most common words for father and motherrespectively. However, the etymology of both words is based on nurturing and nourishing and has nothing necessarily to do with biological paternity and maternity. Two shlokas follow. I need not give rea [??] word-for-word translation. Since they find an echo in many texts, I need not cite chapter and verse either. The first shloka mentions five kinds of fathers (पितृ-s), the second seven. The consolidated list is: (1) Someone who gives you food; (2) Someone who saves you from fear; (3) Someone whose daughter you marry; (4) Someone who gives birth to you; (5) Someone who invests you with the sacred thread; (6) Someone who gives you knowledge; (7) Someone who confers a mantra on you; and (8) an elder brother. जनक/जननी(janaka/janani) are words for biological father/mother and they are only some types of father/mother. Ditto for something like पुत्र (putra), or son. A son is known as putra because he saves his father from the hell name put. Having said that, a putra doesn’t have to be biological. The Dharmashastra texts (Manu Smriti IX/158-160 for example) mention other kinds of putras too. Sure, there are issues that centre of inheritance of property. But even there, all non-biological putras aren’t barred.

The epics and the Puranas often describe the glory of royal lineages. In talking about a specific king, having described his glorious ancestry, they will go on to say, स्वेन कार्येण (through his own deeds) or तेन कार्येण (through his deeds). I am what I am because of who I am. That definition, whatever else it may be a function of, is not a function of my friends and relatives. The Chandogya Upanishad has the story of Satyakama, Jabala’s son. Satyakama sought a preceptor and went to the rishi Gautama, who asked him who his father was. Jabala didn’t know, so neither did Satyakama. (The Satyakama story merits more discussion in a later column). Since he defined himself by stating the truth, Gautama had no hesitation in accepting Satyakama as a disciple. There is a famous Hindi film dialogue that goes, “Baap ke naam ka sahaara kamzor log lete hain”. We will peel off other layers of the onion later.