1989: Between History and Memory

The threat today is no longer from the comic strip communism of Pyongyang. It is the ex-communist as an aggrieved nationalist, or the pinstriped communist as a Confucian capitalist, who challenges the world 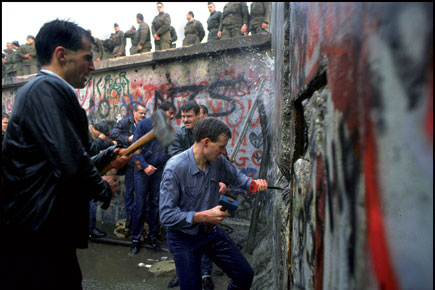 The threat today is no longer from the comic strip communism of Pyongyang. It is the ex-communist as an aggrieved nationalist, or the pinstriped communist as a Confucian capitalist, who challenges the world

If the iron curtain was a metaphor, very Churchillian in its resonance and effectiveness to capture a world divided by the Cold War, the Berlin Wall was very real, and as granite as Communism. On 9 November twenty-five years ago, after nearly three decades of its existence as a monument to the perversion of an ideology, it fell. It was coming, but a goof-up by an apparatchik of the erstwhile GDR made it sudden—a spontaneous night breach, an emotional reunion between East and West Berlin, a carnival on the ruins of a lie. A few months later, the two Germanys would be re-united, with Chancellor Helmut Kohl as the curator of Europe’s biggest show of freedom. Günter Grass protested against the emergence of an anti-socialist behemoth, its Wagnerian grandeur, and then, the author of The Tin Drum was fast becoming a German version of the post-exile Solzhenitsyn: the metamorphosis of a great writer into a false prophet. But history was unstoppable, and soon the Russian who refused to send tanks to the vassal states of Eastern Europe would fall by the wayside. Gorbachev was then, as captured by an Oliphant cartoon, Mikhailangelo. As he sculpted freedom elsewhere, the cracks were on him. The last general secretary of the Soviet Union was swept aside by the forces unleashed by him. It was all made possible by the spirit of 1989, rightfully the annus mirabilis of Europe.

It was the year Communism unravelled, when the street won the argument over freedom. As a project in dreaming, Communism was more ambitious than Christianity: wasn’t it heaven-on-earth? As an ideology and later as a faith imposed by the jackboot, with the promise of a better tomorrow in exchange for a frozen conscience, it was perhaps Christianity without the cross. In retrospect, it was an artificial faith; or it was one ghost story that kept a vast section of humanity hooked—and haunted. Or maybe it was just a comforting superstition. In the year of 1989, it looked fragile, perishable, from Berlin to Prague, from Budapest to Bucharest, from Warsaw to Sofia. Prague was perhaps the most romantic dateline: the site of the Velvet Revolution. One man took out a key chain and rotated it on his finger, and instantly, the act would be copied by thousands, creating a metallic symphony of freedom never heard before in what was then known as Czechoslovakia. And it was from a theatre called Magic Lantern in Prague that a chain-smoking playwright, Václav Havel, scripted the first draft of the Velvet Revolution, which would eventually make him the philosopher king of post-communism. The Velvet Revolution was an amateurs’ ball; playwrights and novelists, rock singers and other dreamers were in the vanguard. It was not all that velvety elsewhere. In Bucharest on Christmas day in 1989, it was said that 120 bullets were fired at the Ceausescus, portrayed as communism’s evil couple.

Still, retribution was not the theme of 1989. It was the year that, among other miracles, Clementis regained his cap posthumously. In the opening page of Milan Kundera’s The Book of Laughter and Forgetting, when the communist leader Klement Gottwald stood on the balcony of a Boroque palace in Prague in 1948 to address the people, ‘there were snow flurries, it was cold, and Gottwald was bareheaded.’ The comrade who was standing next to him, Clementis, ‘took off his own fur cap and set it on Gottwald’s head.’ Kundera writes:

The party propaganda section put out hundreds of thousands of copies of a photograph of that balcony with Gottwald, a fur cap on his head and comrades at his side, speaking to the nation. On that balcony the history of Communist Czechoslovakia was born. Every child knew the photograph from posters, schoolbooks, and museums.

Four years later Clementis was charged with treason and hanged. The propaganda section immediately airbrushed him out of history and, obviously, out of all the photographs as well. Ever since, Gottwald has stood on that balcony alone. Where Clementis once stood, there is only bare palace wall. All that remains of Clementis is the cap on Gottwald’s head.

Beneath the velvet romance of 1989 lay stories of defiance and death, of purges and tanks from the Soviet Union. The hero of the crushed Prague Spring of 1968, Alexander Dubcek, was there to witness the freedom day two decades later. He even shared a stage with Havel. For Hungary, the year that mattered before 1989 was 1956, when Imre Nagy was executed for his deviation from the path. 1989, in its poignancy and spontaneity, was homage to all those writers and filmmakers who lived up to Borges’ motto: censorship is the mother of metaphor. It was a clash between the truth of the living and the lies of the ruling. And the dissenting mind, as Havel wrote, was all about ‘living in truth’, which itself was a variation of ‘anti- political politics’. Five years before 1989, Havel wrote from unfreedom: “Yes, ‘anti-political politics’ is possible. Politics ‘from below.’ Politics of man, not of the apparatus. Politics growing from the heart, not from a thesis. It is not an accident that this hopeful experience has to be lived just here, on this grim battlement. Under the ‘rule of everydayness’ we have to descend to the very bottom of a well before we can see the stars.” 1989 was the end of suffering.

The Day After was not all romance. In power, some revolutionaries looked out of place, and some even began to mime their erstwhile tormentors. Lech Walesa in Warsaw, for instance, was a study in how the management of power was as equally responsible an endeavour as the struggle for freedom. But it was three extraordinary men who played background music to the passion play of history: Karol Wojtyla (Pope John Paul II), Mikhail Gorbachev and Ronald Reagan. The Pope’s visit to the shipyard of Gdansk, the birthplace of Solidarity, was an audacious rejoinder to the Godforsaken part of Europe. In Moscow, Gorbachev undermined the artificial empire he was presiding over with concepts like perestroika and glasnost. As streets erupted in Eastern Europe, he refused to send tanks. He initiated the funeral rites of the Soviet empire, and sadly, also his own redundancy as freedom dawned. In Washington, Reagan fought the Cold War with Manichean passion; “Tear down that Wall,” he said with Hollywood bravado from Berlin. Communism was destined to collapse, because it denied its people the fundamentals of humanity. These three brave men hastened the disintegration. They were leaders.

Leaders are what the world misses most today, leaders who can not only read the instincts of history but shape it as well. When Tahrir Square in Cairo was the headquarters of what the media called the ‘Arab Spring’, the evocation of the spirit of 1989 was a bit overstretched. There was no intellectual or (a)political leadership. In Washington and elsewhere, the leader was a triangulating wimp, too cautious to be caught in the whirl of freedom. The leader has not changed, though the world did. The threat today is no longer from, say, the comic strip communism of Pyongyang. It is the ex-communist as an aggrieved nationalist, or the pinstriped communist as a Confucian capitalist, who challenges the world with domestic paranoia and extraterritorial stunts. Still, there is no effective counterpoint to Vladimir Putin, and we are all busy appreciating the Chinese model. Freedom is still an endangered idea, and so is the leader who can save it.