In the box with Navjot Sidhu and Kapil Dev 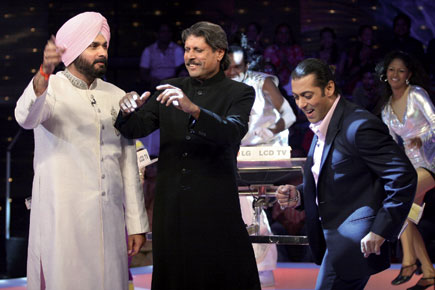 In the box with Navjot Sidhu and Kapil Dev


A piece of rusk in his right hand, a cup of coffee in the left, Navjot Singh Sidhu is in raptures. “Oye hoye hoye,” he says, biting into coffee-soaked rusk. “Interview ke pehle rusk ka maza lene doh mujhe,” he says. (“Before the interview, let me enjoy my rusk.”)

It is the second Test between India and England at the Wankhede Stadium, Bombay. Sidhu has just gone off air in the Star Cricket commentary box. The enclosure is cramped. You could easily misstep or bang your head against a beam if you were not careful. The small room, which has about eight people, is air-conditioned. It also has two Orient table fans. Two commentators go on air at a time. They sit in the front of the room, a board with the channel logo providing the backdrop. When their turn is up, they get up and crouch to the back of the room, past a sign that warns them to mind their heads. At the rear, they sit and help themselves to refreshments or banter. Near the left wall of the box as you enter, there are two blazers on one hanger—a beige blazer draped over a dark one. One arm of a pair of Ray-Ban Wayfarer sunglasses sticks out of the chest pocket of the beige blazer.

Sidhu is part of Star Cricket’s much-advertised Hindi broadcast bunch for the ongoing India-England series. The team also includes Kapil Dev, Arun Lal, Rameez Raja and veteran cricket journalist Ayaz Memon. Sourav Ganguly is there too. Ganguly is also doing English commentary. He shuttles between the boxes, out of one room and into another, a bit like Michael J Fox in the movie The Secret of My Success, where he holds two jobs in the same building. Just that Ganguly does not have to change from casuals to suit in an elevator, something Fox’s character has to do in the film.

Expectedly, Sidhu is the most entertaining character around, now a sage, now a clown, but always well dressed. He is doing live commentary after a long gap. He was a regular at one time and a popular one too. But it is said his exuberance did not go down well in some quarters and he disappeared from the scene. Asked if he missed live commentary, he says, “Main kabhi zindagi mein mudke nahin dekhta. (I never look back). In 1999, I left cricket. I did not touch the bat after that.” And then it comes, barely a minute into the conversation. A Sidhuism. “The past is a bucketful of ashes.”

In the course of the conversation, Sidhu often quotes passages and sayings in Hindi or Punjabi, not all of which are easy to understand. But he is such a non-stop performance anyway that it is pointless to hang on to every word he pulls out of his personalised vocabulary. So, you just sit back and soak it in. You are also aware Sidhu has a controversial side to him. In 2006, the Punjab & Haryana High Court ruled him guilty of homicide for an incident that took place in 1988. A Supreme Court stay on the conviction rescued him. Talking about Big Boss, the reality show in which he recently took part, it is ironic when he says people can see your real nature on the show. “Baaki sab toh chehre hain.” (The rest is all a mask. Be prepared for a lot of Hindi lines because you cannot do justice to Sidhu’s personality in translation.)

You ask him if he prepares Sidhuisms in advance, like a commentator’s mise en place. He asks how can he when no one knows what is to happen in the match. You argue that certain situations can be expected, and lines kept ready. “Noooo,” he says, anguished. “[And by the way] those lines are mine. I haven’t borrowed them from a book. There is an ocean inside man. Uss sagar ka jitna manthan karoge, utni cheezein baahar aayengi. (The more you churn this ocean, the more you will find in it.) If you tune your mind, you can achieve everything. In school if a teacher told me I had to participate in a debate, I would bunk school the next three days. I was so shy. As a young cricketer I would score a hundred and then run away at the sight of journalists. But after I discovered meditation, I was a changed man. Jis din se apni aatma se sampark hua, dhyaan lagaya, uss din se utpadan shakti das guna ho gayee. (The day I got in touch with my soul, applied my mind, productivity went up tenfold.) There is nothing good or bad in this world. It depends on ‘soch’ (thinking). Soch oonchi, aadmi shahenshah, shahon ka shah. Soch neechi, aadmi bhikhari.” (Exalted thoughts make you a king, lowly thoughts a beggar.) A simple question. A prolix, wayward answer. But also very enjoyable. That is Sidhu.

Ganguly arrives in the box for his turn at the microphone. Someone from the channel hands Sidhu an envelope, which has remuneration for his duties. Ganguly pulls Sidhu’s leg over the payment. “What, cheques? [You are the] future information and broadcasting minister of India. (Why are you taking these small amounts?)”

“There’s nothing in sports,” says Ganguly. “Information and Broadcast- ing.” “Jaane de yaar,” Sidhu begs him, almost blushing. He tells him a journalist with a recorder is around. Ganguly doesn’t seem to bother, or realises it is too late. In any case, there is no request to leave this bit out.

Sidhu seems to love compliments. His eyes and face break into a content, untrammelled grin when he is praised. At such moments he looks like a child, incapable of malevolence. He is pleased, for example, to hear nice words about his sartorial sense, especially the way he matches the colour of his turban with his tie or pocket square. On this day, he is wearing a velvety dark blue Canali bandgala, magenta turban and matching pocket square.

When Sidhu was a child, his father would tell him the story of the first Kennedy-Nixon presidential debate of 1960. It was the first time these debates were televised. For the first debate, Nixon did not take his appearance seriously. He hadn’t shaved closely, is reported to have refused make-up and wore a light coloured suit that did not stand out on black-and-white television. Kennedy, taller and handsomer anyway, wore a

dark suit and looked better. As is well known, Kennedy won the audience over with the first debate. And though Nixon recovered in subsequent debates, JFK made a better first impression. He won the closely fought election. The story, says Sidhu, made him take clothes seriously.

“Impact is achieved by writing,” Sidhu says. “Ten times the impact of writing is achieved by oration. Fifty times the impact of oration is achieved by looks. There is no sin in wearing good clothes. It’s an art, which not many people have.” He also says the buffoonish representation of Sardars in popular culture would bother him, and would use clothes to fight that. “Only now, with films like Singh is Kinng, Son of Sardaar is the Sardar getting due respect. If the pagdi is good, if the clothes are good, a Sardar’s personality shines.” He says he has multiple turbans of the same colour or its different shades. He gets them dyed by local specialists. If he buys a new tie, he sends it to the dyer, who makes a turban that matches the tie.

There are more commentary boxes on the floor where other parts of the day’s telecast are shot, like highlight packages or reviews of a session during breaks in play. Before we meet Sidhu, we meet Kapil in one of these rooms. It is more spacious than the live commentary box. Kapil wears a cream shirt and a patterned purple tie. There is a thin layer of make-up on his face. There aren’t many chairs around and while discussing seating options he jokingly offers you a chair and says he will sit on the floor. This is during the tea break and the field is to his right. He hears your questions and he answers them without pausing between sentences. While answering he looks at you a little, but once done, stares at the field to his right. That is a sign for you to move to the next question.

Kapil speaks righteously about Hindi commentary. “I personally feel it is important that commentary goes to every corner of the country,” he says. He builds the case by pointing out that half the players of the team, including captain MS Dhoni, are from small towns. He also says Hindi has a flavour absent in other languages. “‘Kya dhuandar shot maara’ sounds better than ‘what a great shot’,” says Kapil. “You respect all languages, but when you think in your own language and speak, something more beautiful comes out.”

Asked if he thinks in Hindi or Punjabi, Kapil says, “Over the years it has become a mixed pattern. It depends on what you are doing. Mathematics… I straightaway think in Hindi or Punjabi. That’s how I learnt. When playing, there are some things you can only express in English.”

Rameez Raja would readily agree. “There can’t be literal translation of every word,” he says when asked if some cricketing terms are hard to translate into Hindi. We discuss literal translations for silly point, and come up with these: bewaqoof aadmi, bewaqoof bindu, bewaqoof maatra and bewaqoof dashamlav.