Something makes a Laxman at half-mast even more dangerous. We see Aussie heads nodding in sober agreement 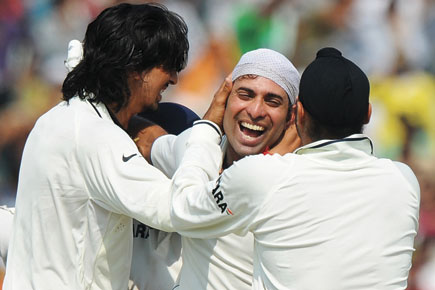 Something makes a Laxman at half-mast even more dangerous. We see Aussie heads nodding in sober agreement


Suresh Raina did not face a single delivery on the final day of the Mohali Test between India and Australia. Yet, he made a huge contribution to India’s thrilling victory. Raina took on the challenge of being a runner for VVS Laxman, whose back was hurting. Being a runner is a tricky job. A runner is directly responsible for the fate of his teammate. When a runner drifts out of his crease, daydreaming, the batsman is liable to be out. When the runner obstructs the field or handles the ball, the batsman will pay the price. And yet, a runner cannot get defensive in his approach. In a split second, he has to gauge if there is a run or not and then take off.

But while the runner is the legs of a batting unit, the batsman, however incapacitated, is the brain. Like Thakur in Sholay. In Mohali, Laxman was Thakur. Thakur orchestrated Jai and Veeru against Gabbar. Laxman guided Ishant Sharma and Raina, then Pragyan Ojha and Raina, against Australia. Of course, Laxman was more directly involved in the fight than Thakur.

Laxman’s immediate association is with grace, silk and all that. But Mohali was another reminder from him that he also possesses a toughness that enables him to rise above pressure and physical pain. His chronic back problems were at their worst. It was much due to physio Nitin Patel, one of the men Laxman owed his feat to, that Laxman could withstand the rigours of his mission. Patel readied Laxman for the innings with a combination of pain-relieving injections, pills and back exercises. Though the pain is punishment for Laxman, it has come to symbolise good luck for India. Three of Laxman’s best match-winning knocks have been accompanied with the background music of his groaning back—the 281 against Australia in 2001 for which all adjectives fail, the 103 not out against Sri Lanka in Colombo, and now the 73 not out in Mohali.

Sachin Tendulkar, Zaheer Khan (the man of the match), Rahul Dravid and Raina all played crucial roles for India at different times over the first four days in Mohali. On the fifth, however, it was left to Laxman. The rest of the team had collapsed like Commonwealth Games infrastructure, with the exception of Tendulkar. Eight wickets were gone and 92 runs remained. At the other end was Ishant Sharma. At that point those 92 runs looked like 92 miles. It was fascinating to watch the two. There was Laxman, who nicely leans into his strokes, who keeps his knees slightly bent right from the stance. And there was Ishant, who never flexes his knees while batting, bending instead at the waist.

We saw a Laxman we had not seen before. He screamed himself hoarse directing Raina and Ishant, and later Ojha. Ojha, in particular, was at the receiving end of a particularly severe rebuke. He could only look sheepish as Laxman pulled him up for not being up for a single. It was the fifth ball of Ben Hilfenhaus’s over. Had the single been taken, Ojha would have had only one ball to face and Laxman would have been back on strike. Of course, Laxman quickly made it up to Ojha in a ‘Sorry mate, I lost my shirt’ moment. A smart move. The task was tough enough. There was no point rattling Ojha further. It also showed conscience. One can’t imagine other team members having the humility to say sorry to a tailender for an outburst.

“I knew the last ball would be a bouncer, and there was no way I could have taken a single off that ball,” Laxman said. “So we had to take the single off the fifth ball, so I got a little… it was wrong on my part, and that’s what I apologised to Ojha for it at the end of the over. I asked him to be calm, and not lose his composure, and not get tense and panic.”

Mahendra Singh Dhoni hit the nail on the head when he said, “Whatever field you set, Laxman can keep scoring.” Part of the reason for this is his balance and lightness of foot. It helps him easily go on the backfoot or front foot. The other reason, of course, is his repertoire. There are two Vs in his initials, but he plays all over the ‘O’ that a field represents.

Laxman has played in a generation of superstars. As a contemporary of Sachin Tendulkar, Rahul Dravid, Sourav Ganguly and Virender Sehwag, the only role available to him initially was to make purists nostalgic. Since the 281, however, the stylist also started becoming a match-winner. Now the blend is complete.