Last year, he made an unbeaten 143 against South Africa to win India a crucial game 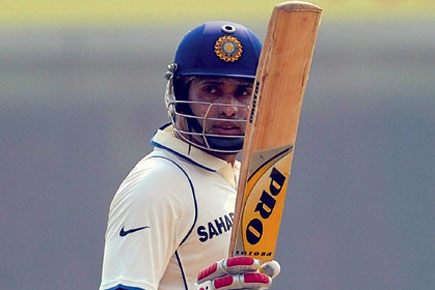 Last year, he made an unbeaten 143 against South Africa


Cricketer VVS Laxman scripted his fifth hundred at the iconic Eden Gardens in Kolkata on 15 November during India’s Test against the West Indies. His average at Eden Gardens is an impressive 110.63, which is third in the roll of players with at least 1,000 runs at a particular venue. Don Bradman leads with a figure of 128.53 in Melbourne, followed by Greg Chappell with 111.77 in Brisbane.

Laxman’s first century came in 2001 against a Test opposite Australia, where his epic 281 helped India win at a time when there was no hope. This was only the third time in the history of cricket that a team had managed to win a Test after being forced to follow on.

He then scored 154 not out against the West Indies the very next year and another unconquered 112 opposite Pakistan in 2007. Last year, he made an unbeaten 143 against South Africa, which enabled India an innings victory that kept their place as the world’s top Test team. “It feels good. It is probably after a long time that when the team is not in a difficult position, I have gone in and got a hundred,” he was quoted as saying. It has since become a part of Indian cricket folklore, and the innings is ranked the sixth best Test innings ever by Wisden.

The right-hander also bowls off-spin and is noted for his superb timing and ability to hit against the spin, much like his role model Mohammed Azharuddin. It is ironical that though Laxman has scored 2,279 runs against Australia in 25 Tests, he has never been that successful against lesser opponents like Bangladesh or Zimbabwe. He is yet to score a century against England.

Rahul Dravid praises the cricketer, saying, “The position Laxman bats in—at No 5—sometimes you know you are under pressure.

And Laxman has this uncanny ability to step up and deliver in those situations.” Sunil Gavaskar quips, “Well, VVS’s wife should get worried as the Eden is now his mistress!”