Perks of the Job

Watching, er, hearing Yuvraj in full flow, and a chance encounter with an autorickshaw driver who starred in Johnny Mera Naam 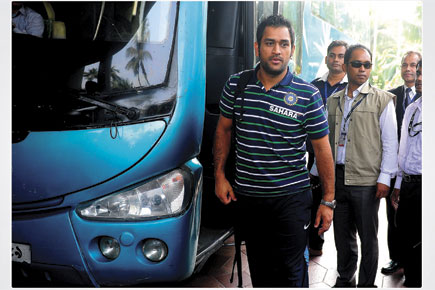 Watching, er, hearing Yuvraj in full flow, and a chance encounter with an autorickshaw driver who starred in Johnny Mera Naam


Three Indians on the Biman Bangladesh flight from Dhaka to Kolkata do what only Indians can. They switch on their mobile phones mid-air. Nothing happens and one lives to reunite with the homeland. But it is a re­lief to part company with these distinguished gentlemen.

From Kolkata on to Bangalore, where India and England set the World Cup alight with their tied match. The problem is, there is a week’s gap between games. But Bangalore is not a bad place to be stuck in. More importantly, there is ample opportunity to watch the Indian team at the nets.

In some ways, watching the nets beats watching a match. You get a close view of the players as they polish different dimensions of their craft. With distinct tools. For example, Sachin Tendulkar will bat against a fast bowler at one of the nets. He will then collect his bats and walk to the next net, where he will practise with a light plastic ball. This is by way of preparation to play swing. Also fascinating is the assortment of objects used at the nets. Coach Gary Kirsten turns ice-cream counter man when he uses a scoop—more like a ladle, really—for throw-downs. The ball is kept in the ladle and with an over-arm motion slung at the batsman. All this is not new, but educative to watch, more so because you are standing where the wicket-keeper would be.

A white Isuzu bus transfers players from the hotel to the nets and back. It has smart rear view mirrors that hang off the top corners like a crab’s foreclaws. If you stare too long, the bus might gobble you up. And Stephen King would do a sequel to  Christine. When the players practise, the inhabitants of ‘Christine II’ nap. The driver and senior staff sleep in the seats, their minions make do with the luggage hold.

One sound, more than any other, marks the emergence of the players from the dressing room—the crunch of cleats on granite. They come out wearing the red India practice shirt, grey knee-length shorts, sunblock, sunglass­es. The batsmen carry their pads under their arms. Senior journalists wait at the door just so that boys half their age will mumble small talk at them. “All well?” This is all players will spare for veteran journalists, men with a lifetime in the job, which, despite everything, is addictive and has considerable perks. Asking the play­ers even the odd question at the nets is PR sui­cide. When I ask Sreesanth for a comment af­ter he accidentally bowls a beamer at Yuvraj Singh, he raises eyebrows. “I’m still playing the World Cup. You know the rules. Now please don’t write anything,” he says haughtily. I only asked for an answer, not the Louis Vuitton loafers he wears off the field.

One misses Julian Assange when the Sreesanth-Yuvraj episode happens. How entertaining it would be to employ the investigative chicanery of Assange and find out what exactly Yuvraj said to Sreesanth after being struck by the beamer. But even without Assange around, it is obvious that a full sargam  of Punjabi invective has escaped Yuvraj’s mouth. How is this for a new Yuvraj slogan: six sixes in Durban, six gaalis  (abusive words) in Bangalore?

Magizhendan, a net bowler who played for Karnataka’s age group sides, reveals how he too has been at the receiving end of Yuvraj’s musical outbursts. “I bowled him a bouncer. He said, ‘Bh__, I will hit you if you do it again.’ Sachin was amused and told me to bowl a slower one next. Yuvraj was beaten.”

Manish Kumar is another junior Karnataka player sparring with the Indian superstars. Bowling at the nets, he says, helps him get pearls of  gyan  from the gurus. Being a bowler himself, he treasures an encounter with Dale Steyn.

“This was during the Royal Challengers’ Bangalore nets in the inaugural IPL three years ago,” Manish says. “It was the first time I was at the nets for a big team. Steyn, one of my idols, was at the net next to mine. It was unbelievable.”

Asked what tips the South African gave him, Manish says, “He said if I did not have specific goals for each net session, I might as well sit at home and watch television. He also said that I should gradually increase strength: if I can lift 50 kg, he suggested I try to lift 60 kg, and so on.”

It is not only students who juggle cricket and studies in India. Teachers do too. Manish’s mathematics teacher at MES College, Lata Seshadri, is at the nets with her 14-year-old son, Gokul. Lata inherited her family’s love of cricket. She became a convert, however, when Ravi Shastri came on the scene. Like other girls of that generation, she had a Shastri poster on her wall.

“I often use cricket analogies while teaching mathematical concepts like tangential velocity,” Seshadri says. “Students enjoy it.” Sometimes, when private tuition students demand that she switch on the TV during an India match, she shuts the books and reaches for the remote.

Back to the nets, where Sreesanth has more to contribute to the day’s highlights. While batting, he sends an uppish drive into the back of Eric Simmons, the Indian bowling coach.

I am ready to anoint Sreesanth the character of the week. But then I hail the autorickshaw of Mohammed Baig. He is old, bespectacled
and wears a worn-out khaki jacket. He tells his story.

“Circumstances forced me to become a rickshaw driver. I’m a film industry person. Have you seen Johnny Mera Naam? I was in it. I was in the boxing scenes. There was a time when the doors of Dilip Kumar’s house were open to me. I was married to a Frenchwoman. But someone got her killed with black magic.”