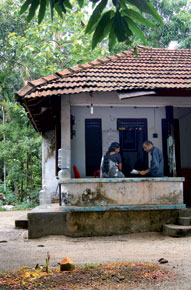 It is common knowledge that some of the country’s top talent in track-and-field competitions comes from Kerala. What is not so well known, however, is that participants from the region are equally gifted at water sports. Awards in rowing, kayaking and canoeing are often the preserve of girls hailing from the backwaters of the state. It was a fact that came to all-India attention in tragic fashion when four girls, gold medallists at the national level, formed a suicide pact at the Sports Authority of India (SAI) centre in Alappuzha.

In early May, Teresa Jacob, Aparna Ramabhadran, Shilpa KR and Sabitha Santhosh decided to eat the poisonous fruit of the native othalanga or ‘suicide tree’ in an attempt to escape the harsh ragging and bullying meted out by trainers and senior students at the SAI. Aparna, 17, a gold medallist in rowing at the 2014 National Championship held in Kolkata, died within a day. The other three girls are reportedly recuperating at the Alappuzha Medical College hospital.

Statements made by the surviving girls and Aparna’s dying declaration highlight the fact that they had all been tortured by their trainers and seniors. They also claim that the hostel living conditions were deplorable with four or five students forced to live together in a tiny room. “They allot hostel rooms indiscriminately,” says S Beena, Shilpa’s mother. “Juniors and seniors are usually asked to share the same room. The last time that Shilpa visited us at home, she started crying at the thought of returning to the hostel. This was the same case with the other girls.”

Beena and Yamuna Santhosh, Sabitha’s parents, had tried to help their depressed daughter a few months ago. They spoke to the hostel warden, who promised to look into the matter and take necessary action. “She was sympathetic to the children, but she resigned soon afterwards and a new warden came in who did not even speak to the students.” In the warden’s absence, senior students were given charge of all key responsibilities and there was nobody to notice the ragging that the junior girls went through.

Damage control is currently on in full swing at the SAI and officials are doing their best to downplay the turn of events. Aparna’s mother, who is a teacher in a nearby anganwadi, has been promised a temporary job and compensation in return for her silence. “[An official] asked me not to raise any allegations against the SAI and offered me a job and money in return. I heard from him the same day that my daughter passed away,” says Geetha Rambhadran.

Sreekumara Kurup, secretary of Kerala Rowing Association, an organisation that functions closely in cooperation with the SAI, repeats the version that officials are putting out: “The girls consumed beer at a party held to celebrate their victory at the National Games. Scared of being exposed to their families, they entered into a suicide pact.”

Ragini M, who is in charge of SAI’s Alappuzha centre, says she had no idea of any ongoing harassment or ragging. “The girls had never given us the slightest indication that they were unhappy,” she says. The parents, however, continue to maintain that the four girls had repeatedly complained of physical and mental torture.

There are currently 31 athletes residing at the Alappuzha centre, none of whom is willing to talk to the media. “It should come as no surprise. You cannot expect any of the students to tell you honestly about their situation,” says Kamal Varadoor, a senior sports journalist in Kerala.

Social and economic backwardness are often the common factors that link together athletes who are trained at SAI centres and sports schools under the Kerala Sports Council (KSC). These four girls were no different. Aparna’s father does seasonal work in houseboats. The eldest of two children, she was the family’s only hope of repaying their debts and securing an economically stable future. Sabitha’s father is an agricultural worker, while Jacob’s mother, a widow, is a daily wage labourer.

“It is the same financial situation for most students who enrol at centres under the SAI,” says Sony John, a physical education teacher at Christ College in Irinjalakuda and sports psychologist for the recently held 35th National Games in Kerala. “For poverty-stricken students, track-and-field is the fastest route to a public sector job. Their own backwardness enhances their vulnerability, and as a rule they don’t dare complain against exploitation and harassment. They are always scared of jeopardising their relationship with coaches because it could adversely affect their job prospects,” says Varadoor. He says cases of harassment, including sexual harassment of girls, are not stray incidents and are buried deep within the walls of the institution. “They don’t want to fall out with their trainers. Victim status in a sexual harassment case also taints the reputation of the girl in question,” says A Raveendradas, another senior sports journalist and a member of the Kerala Sports Council.

The SAI provides accommodation and training to nearly 1,000 athletes every year in Kerala. In addition to this, the KSC also provides hostel facilities to an equal number of athletes being trained by coaches associated with SAI. Despite its popularity among Indian athletes, SAI is often labelled an institution where bureaucrats and trainers enjoy absolute control. “The SAI is run completely by their trainers and senior officials. They enjoy unrestricted power over budding athletes, most of whom are adolescents. There is hardly any space for the children to complain or express their dissent. There is no system to validate the selection and training process or to monitor the trainers. Those who are responsible to ensure the welfare of athletes hardly ever do their job,” says Raveendradas. He adds that there are several complaints of sexual harassment and favouritism logged each year, but most go unresolved as athletes and their parents rarely pursue court cases all the way through. “Unfortunately, even in the few cases that are reported, stringent action is never really taken,” he says.

Jimsy Mol’s is one such case. Born and brought up in Alappuzha, she was awarded a gold medal at the 33rd Senior National Rowing Championship held in Pune last year. However, she soon retired from the sport, unable to cope with the favouritism shown by trainers. “An athlete from the Border Security Force was given back door entry to the team for the National Games. She had not even attended the selection trials. I protested and was thrown out,” she says. Jimsy was teamed up with complete newcomers in the final selection trial, she says, and was eventually informed that she had not qualified. “I just got fed up and gave up athletics completely,” says Jimsy, who is currently pursuing her BCom at St Joseph’s College in Alappuzha.

There have also been incidents where female athletes have alleged that they were molested by trainers enroute to sporting events. The case raised by players of the Kerala kabaddi team is one of the few reported examples where action was taken, if only partially. One of the girls in the team was molested by her trainer on a train while they were travelling to participate in the 2008- 09 National Championship. The KSC investigated and found that the complaint was genuine and the trainer was subsequently sacked. “Unfortunately, he was later reinstated. I understand that there was immense pressure put upon the girls and their family to soften their stands in court,” recollects Raveendradas, who had closely followed the case. A month later, the Kerala basketball team trainer was also sacked for molesting a girl on a train. “There was a complaint from a female boxing champion who was forced by her trainer to give him a body massage. The trainer was asked to resign. But this is a rare case. Most complaints are not followed up on for obvious reasons,” he adds. Neither the SAI nor the KSC currently employs a single counsellor or psychologist to address issues and support young athletes. And in the event that someone does want to raise a voice, there is no statutory body available for the registration of complaints.

Experts say that the only solution is to reduce the authority and autonomy enjoyed by trainers. “There should be a statutory body to address the complaints and an administrative authority to take various decisions. A professional body should also be set up to manage and monitor the process of team selection and training,” says Thomas Isaac, legislative member of Alappuzha and former finance minister of Kerala. Till such time, however, athletes have little choice but to learn to live with the current system.