...and looking good to go the last mile 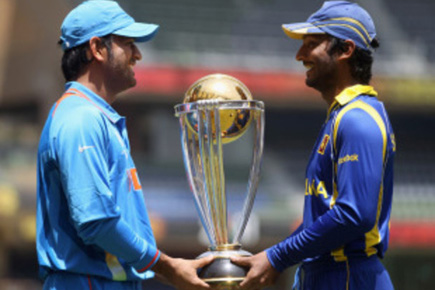 …and looking good to go the last mile


…and looking good to go the last mile

As a sports crazy teenager following the 1990 football World Cup in Italy, I remember reading an article by a journalist at that tournament about his experience. Being at such an event, he said, was like being at “the centre of the universe”.

Having covered India’s World Cup cricket campaign, I can identify with the feeling. Right now, Mumbai is the centre of the universe. As it hosts the final between India and Sri Lanka on Saturday, the cricket virus has infiltrated every inch of the city, not to mention the country. Blue is the Indian team’s colour and you wonder if even trees will turn that shade, the colour rising up the trunk and spreading to the branches. Every conversation is about the match, as is every activity and plan in the city. On Saturday, the planets will revolve around the Wankhede Stadium. For the time being, the renovated venue is receiving last-minute attention. There is the characteristic match-eve orchestra—the echo of nails being hammered somewhere, the crackle of walkie-talkies as officials communicate, the blast of the speakers as they play Akon’s ‘Smack That’ to test the audio system.

India start the final as slight favourites due to the solidity of their batting, the tightness of their bowling and their confidence. India are also the better rehearsed team since they have played tougher matches against tougher opponents. Moreover, Sri Lanka will be worse off for the injuries to Angelo Mathews, the allrounder, and Muttiah Muralitharan, the off-spinner. Murali is still expected to play. Mathews is ruled out. Already, India are 10 for no loss.

The worrying thing is that India, for all their might, have a tendency to collapse when Sachin Tendulkar gets out. Panic drops by the Indian dressing room often. Sri Lanka might just pull off a win in such circumstances. They certainly have match winners in yorker-specialist Lasith Malinga, openers Upul Tharanga and Tillakaratne Dilshan, Murali and Kumar Sangakkara, wicket-keeper, captain and opening batsman. Interestingly, this is the first World Cup final where both captains are wicket-keepers. Nuwan Kulasekara can be slippery as a second seamer. He has a good record against India, especially Gautam Gambhir and Virender Sehwag.

As always, though, Mahendra Singh Dhoni appeared calm, even confident, when he met the press at noon on Friday. While Sangakkara reiterated that bowling was Sri Lanka’s strength, Dhoni hinted that the Indian team was not worried. He suggested this by saying that Pakistan had a more balanced attack than Sri Lanka. Also, India are more familiar with the Sri Lankan bowlers than they were of the Pakistanis. India and Sri Lanka have met 33 times since the start of 2008, the most for any two teams in One-day Internationals in this period. India have won 18 of those matches and lost 13. Besides, unlike the Pakistanis, Sri Lankan bowlers play in the Indian Premier League.

Dhoni, the captain not just of India but of destiny, a man who not very long ago was a ticket collector at Kharagpur railway station, said Ashish Nehra was unlikely to play because of a fracture to the middle finger of his right hand. But despite his return to form against Pakistan, Nehra was not a regular in the team. What matters is India have Zaheer Khan, who has been consistently effective in the tournament. Few batsmen, if any, have looked comfortable against him. His guile and accuracy make every delivery of his potentially wicket-taking. Understandably, he is the second highest wicket-taker in the World Cup with 19 strikes so far. He also has some sort of a hold over openers Dilshan and Tharanga, having dismissed them five and four times, respectively, since the start of 2008. Dhoni also discussed the option of picking S Sreesanth, who has been on the bench since being thrashed by Bangladesh in the opening match. Sreesanth, however, bowls with the classic upright seam. He gets swing and bounce. On his day, he can be a weapon.

In the batting, Tendulkar remains India’s pillar, as has been the case for over 21 years. There are flashier shotmakers in the team. But none of them, not even Sehwag, have the impact Tendulkar does on his side or the opposition. As long as Tendulkar is around, we feel warm and safe. He is our Godrej safety lock. When he gets out, there is no saying how the rest of the batting might do. Gambhir at No. 3 and Virat Kohli at No. 4 have not been consistent. Luckily for India, Yuvraj Singh is in form at No. 5. At No. 6, Dhoni has not been spectacular but at least he has not thrown his wicket. Suresh Raina too has come good at No. 7.

A day before the match, the Wankhede wicket, guarded by a gunman and roped off from intruders, had no grass or patches. Like the city of Mumbai, it is expected to have a little something for everyone. Batsmen and bowlers both would be rewarded. Sudhir Naik, the former India player and curator of the Wankhede, even said that if Tendulkar survives the first 30 minutes, he would get his 100th international century.

India have not played a match at the Wankhede in the World Cup. Sri Lanka have, defeating New Zealand in the group phase. Sangakkara got a century. Murali took four wickets. But Malinga went for 38 runs from five overs.
Dhoni agreed that on such a track, batting first would be the best option. Now toss the coin.