In rowdy-as-ever Punjab, the spirit of kabaddi trumped the heat, chaos and IPL cricket in a festive celebration of the game. 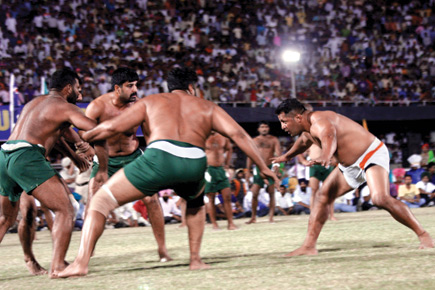 In Punjab, the spirit of kabaddi trumped the heat, chaos and IPL cricket in a festive celebration of the game.


The battle raged right in front of your eyes, the outcome uncertain. The umpire sounded his whistle, and a pulsating roar went up from the crowd. A circular pit in the middle, the focus of all attention, was choked with dust as a fearless, bare-bodied ‘raider’ in orange-striped shorts crossed a demarcated line into enemy territory, with the clock ticking away towards his 30 second deadline, even as his opposition in the form of four similarly muscular ‘stoppers’ in red-striped shorts awaited him arm-in-arm. The raider bent his body low, spread his arms like an eagle, and braced forward for a destined confrontation. He pushed deeper into enemy territory, hoping to tag one of the stoppers with his outstretched hands before stealing his way back to home ground, thus scoring a point. Momentarily, the stoppers seemed to retreat. But then, in a sudden blur of movements, one stopper lunged for the raider’s legs, throwing him to the ground in a scissoresque manoeuvre of hands and limbs. The crowd roared. But the raider didn’t dare let his body go limp. Surrender, he wouldn’t; he wriggled violently, breaking free of his captor and running back to his own territory, victorious, with one arm pointing to the sky. He’d tagged one.

This was no place for the faint of heart. This was Bathinda, in the heartland of Punjab, where the game of kabaddi captivates millions across generations. Here, in similar dust-choked pits, many a bone has been broken, nose bloodied, and ankle sprained in a game that combines judo, wrestling, grappling and athletics, all at once. Westerners have found it difficult to define the game, sometimes even calling it a ‘push-of-war’.

Last week, here and in seven other cities across Punjab, enthusiasts held their own collective breath as audiences for the World Cup of Kabaddi (circle style). The competition, a brainchild of Punjab’s Deputy Chief Minister Sukhbir Singh Badal, brought together more than 100 players from India, US, Canada, England, Spain, Italy, Australia, Iran and Pakistan, with Rs 2.2 crore at stake as prize money—Rs 1 crore for the winner.

As competitive sports go, the game seems designed for a hearty Indo-Pak wrangle. And in these matters, there’s always some sort of mutually assured destiny to it: sure enough, India and Pakistan made it to the finals. To get Indian fists pumping air that much harder, Badal even announced a special prize of Rs 5,000 for every point scored by an Indian player, and assured employment to all players in the Indian kabaddi team. This was to be the climax of a frenzy that held Punjab in its grip for two weeks. A fortnight in which patients in a Ludhiana hospital were refusing treatment by doctors unless TV arrangements were made for them to watch kabaddi, and preparations for the harvest festival of Baisakhi were left in the lurch as farmers jostled to catch the action.

Hotels and dhabas across Punjab switched from IPL cricket to PTC Punjabi channel, which was airing the contests live. Badal even claimed that the kabaddi tournament had “left behind IPL cricket as far as TRP ratings in northern India, New Delhi, Canada, Britain, US, Italy, Pakistan and Iran are concerned”. That cannot be confirmed, but the cheers in Punjab grew audibly rowdier as India trumped Canada to make the finals, while Pakistan edged out Italy.

In the meantime, everything else seemed to be rising in rebellion against the game, especially the day temperature—as the mercury reached for the 40º C mark. It wasn’t enough to deter the turbaned throngs, who found ingenious ways to get into the Bathinda Sports Stadium that was already packed beyond capacity with more than 50,000 people. The roofs of a nearby Gurdwara were already taken up by spectators. Inside the stadium, with no designated press area, journalists scurried about for a vantage view. Policemen occasionally resorted to mild lathi charges to maintain order. As if to forge a bond of empathy with the stragglers in the pit, there was no drinking water around either (ditto, Ludhiana).

What to expect is never clear on such occasions, but a Sangrur game even had a pamphlet-showering toy plane crash into the crowd, a few feet away from Badal, throwing securitymen into a tizzy. The organisers had had enough to deal with already. More than a dozen Indian players had to be barred from the tournament for testing positive for drugs. Missing from the fray were teams from Sri Lanka and Bangladesh, the other two countries big on kabaddi. On the other hand, the surprise semi-finalists Italy had mistakenly sent two teams to participate in the tournament. In the end, a balance was struck with the Italian delegation fielding a combination team.

Badal, though, didn’t let his enthusiasm flag even for a moment. Addressing the crowd, he announced plans to build eight floodlit stadia across the state to promote both kabaddi and hockey, the two beloved games of Punjab. In Ludhiana, he also arranged for plenty of song-and-dance to keep spectators engaged while the action was off, transforming it into a carnival city on the final day, what with Punjabi singers Jaswinder Jassi, Sukhwinder Singh, Amarinder Gill and comedian Bhagwant Mann enlivening the proceedings.

Of course, the crowds were there for the high-testosterone wrestling and wriggling, and there was plenty of that. This is kabaddi sans the breathless chanting (which lends the game its name; also why it’s called hu-tu-tu in western India, ha-do-do in Bengal and chedugudu in the South), which in the original game makes lung endurance so critical—run out of breath as a raider, you lose; snap the raider’s chant as a stopper, you win.

This ‘circle’ version is about escape routes. Historians have often linked kabaddi with Abhimanyu’s search for an exit from his chakravyuh encirclement in The Mahabharat. In present day Ludhiana, the spectacle didn’t involve chariots, or bows-and-arrows. But there was enough to keep everyone rivetted.

The tournament that started in Patiala, where it was inaugurated by filmstars Dharmendra and Sunny Deol, had its culmination in Ludhiana, site of the final epic between India and Pakistan. After two hours of song-and-dance and intense kabaddi, the score read 58-24 in favour of India. And India were declared the ‘world champions of circle kabaddi’. The din was deafening.