Australia is the New Pakistan

…and the upcoming series, starting 26 December, no mere game of cricket 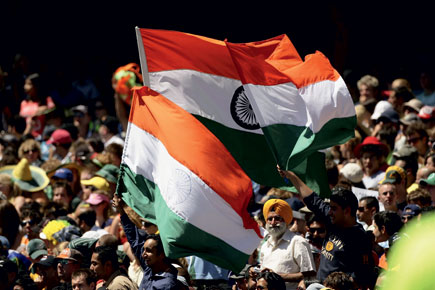 …and the ongoing series, no mere game of cricket


It’s the biggest match of the Australian summer. Talking of great rivalries in Test match cricket, it doesn’t get better than India versus Australia on Boxing Day at the MCG. Ticket sales, which started on 22 August 2011, have been very encouraging and if MCG administrators are to be believed a crowd of about 70,000 is expected at the ground on 26 December when the first Test gets underway.

There’s a lot at stake for both these powerhouses of world cricket, each aiming to reclaim lost pride and give their fans the perfect New Year present. Since landing in Melbourne a good two weeks ahead of the tour, I was fascinated to witness the passion the Boxing Day Test has aroused in Victoria’s Indian diaspora.

Most suggest this is India’s best chance to conquer what has been labelled their ‘final frontier’. Two practice games and a substantial two weeks in the country ahead of the big game mean the Indian team won’t easily invoke the excuse that there wasn’t time to prepare/ acclimatise. On the other hand, half the Aussie frontline players are out with injuries. Reason enough for Dhoni and team to start the series as favourites, a first in the history of India-Australia cricket in Australia. Never before has an Australian side started a series at home as underdog. Even more interestingly, neither the Australian team nor their media are contesting the tag. On the contrary, they are happy to let the Indians start as favourites, and only time will tell if this reverse strategy of trying to put pressure back on the Indians is successful.

The Indian fans’ hatred of the Aussies, especially Ricky Ponting, is palpable here. “Hopefully the Australians will now agree that Ponting is no Tendulkar. He is not even half as good as Dravid,” says the owner of an Indian restaurant in downtown Melbourne while listening to a Fox Sports discussion on whether to persist with Ponting. His second statement is even more startling. “We need to beat the Aussies to avenge the race attacks on us over the past couple of years. Victoria was a fantastic place to live in till these attacks robbed us of peace and happiness and this series is our chance to give it all back.” The cricketing merits of these foaming rants will remain debatable, but the sentiment is unmistakable.

Australia, it is evident, is gradually becoming the new Pakistan where Indian cricket fans are concerned. Unlike England, against whom we no longer carry any political baggage and hence a loss is part of the game, India versus Australia cricket is now a proxy war and Australi- ans the new sworn enemies.

This works well for us in India. With bilateral series against Pakistan a thing of the past as a result of the political chaos across the border, Indian fans, with their great appetite for spectacles, needed a new great adversary. Australia fit the bill perfectly. Incidents like Moneygate triggered it off and Australian aggression on the field became grist for the hate mill. Race riots in the country have helped churn the sentiment, and on the eve of the Boxing Day Test, it is certain we are about to witness more than a high-powered cricket series. The touring media has also done its bit to underline the political overtones to this contest—selling it as a nationalist spectacle rather than as a great cricket rivalry.

This works. Because cricket was and is the true national game in both India and Australia. It is so because it could be played against the English as part of the great imperial project. Hockey in India or Aussie Rules in Australia could not, and hence their legacies, like their origins, remain curious in the sporting hierarchies of the two countries. When George Orwell said: ‘Serious sport is war minus the shooting,’ this is what he was alluding to; this is what really answers the question: ‘Why cricket, not hockey in India?’ If sport is, in fact, a metaphor (and in some cases a metonym) for war, then cricket simply was a necessity in both India and Australia. Prowess in any old sport wasn’t enough, prowess had to be demonstrated in empire sport, which would mark a symbolic victory against the ruling state.

It is this exalted status of cricket in the two countries that explains why Brad- man continues to be revered in India despite always having declined opportunities to undertake an extensive tour of India. The only time the Indians had the fortune, or rather the misfortune, of facing Bradman was in 1947-48, when a just independent India toured Down Under. This was the first official India-Australia cricket series, and in 2011-12 we mark the sixty-fifth anniversary of this extraordinary tour of many firsts.

For the record, the Indians lost the series 0-4, a result that might appear mystifying given the Indian performance in first class matches on tour. Before the first Test at Brisbane, captain Lala Amar- nath had established himself as a true leader with a grand 228 against Victoria, an innings Victor Richardson ranked as “one of the greatest ever played” in Australia. Vinoo Mankad was regarded as the world’s premier slow bowler. He had almost singlehandedly won India the match against the Australian XI with figures of 8-84. With quality batsmen like Vijay Hazare and Dattu Phadkar, the latter making his debut on this tour, the Indians certainly promised to put up a fight. And with Gogumal Kishenchand, Chandu Sarwate, CS Nayudu and Ranga Sohoni hitting peak form before the first Test, not even the most ardent Australian supporter would have expected the Indian rout that followed.

A rout almost solely orchestrated by Donald Bradman. Bradman, though 39, was still at his best and his scores—156 for South Australia, 172 for an Australian XI (his 100th first class hundred), 185 in the first Test, 132 and 127 not out in the third, 201 in the fourth and 57 retired hurt in the fifth—bear testimony to his contemptuous domination of the Indian attack. In the six completed Test innings, Bradman scored 715 runs at an average of 178.75, a measure of what he thought of the Indian attack. India might have done better but for the Partition, which had robbed the team of the services of Fazal Mahmood and Mushtaq Ali, the latter also claiming a family bereavement as a reason for not undertaking the journey across continents.

From the very beginning, cricket has been a vehicle for both Australia and India to express national achievement and ambition. Even when bilateral relations were at a low ebb between 1950 and 1970, cricket was seen as the natural cultural bridge between the two nations. Yet, this was a rather uneasy phase of cricket relations, with Australian teams unwillingly going to the Subcontinent and Indian teams drawing little support Down Under because of their poor performances. Indeed, only one Indian team toured Australia during this period, in 1967-68. This period of drought in sport ran parallel to the Australian government’s neglect of India. With Australia continuing to view India from an Austra- lian/ Western Cold War stance till the early 1970s, there was no incentive for Australian cricketers like Bradman through Benaud to the Chappells to perceive a tour of the Subcontinent as anything special. Even when personal friendships flourished between players, such as between Bradman and Hazare, and individual players earned popularity, like Bedi in Australia and Benaud in India, they did little to promote deeper social and political exchanges between the countries.

Matters changed under Prime Minister Gough Whitlam (1972-75), whose enlightened attitude towards India and more generallyAsia helped create Austra- lian attitudes capable of more independent foreign policy formation, influenced more by regional factors than by the imperatives of its traditional Western alliance. This was helped by the enthusiastic response Whitlam got from the equally independent then Prime Minis- ter of India, Indira Gandhi. Improved political relations impacted cricket as well, allowing Australia’s more structured economy to harness the economic worth of cricket in India.

This trend has only been cemented in the years since. For example, India’s tour of Australia in 2003-04 assumed great significance back home. Some standout individual performances by the touring Indians in the four-Test series, starting with Sourav Ganguly’s 144 at Brisbane, had aroused a new interest. It was this series that heralded the birth of the passionate—and on occasion jingoistic—India-Australia rivalry on Australian soil mentioned at the beginning of this essay. This new intensity was further heightened when India toured Australia in 2007-08, a tour now remembered best as the ‘dirty series’, when an ICC observer, in the form of Ranjan Madugalle, had to be flown in to Perth to douse simmering tensions. It was the series in which Anil Kumble famously said at the post-match press conference in Sydney, in words reminiscent of the Bodyline series, that only “one team was playing cricket”.

That the Australians were the ones we loved to watch and also perhaps hate was evident when Andrew Symonds was picked up at a staggering $1.35 million at the first IPL auction in February 2008, just days after the Monkeygate scandal had created uncertain waves in the world of cricket. Since then the intensity has only increased, with cases of political violence in Australia stoking the animosity dispora Indians have now begun to wear on their sleeves.

These deep passions will undoubtedly be aroused again during the current tour, billed by a section of the Indian media as ‘The Agnipath series’. With an evolving political story adding an extra edge to this intense cricketing rivalry, the label might well turn out to be the perfect tagline for this summer of cricket in Australia.