An End, A Beginning 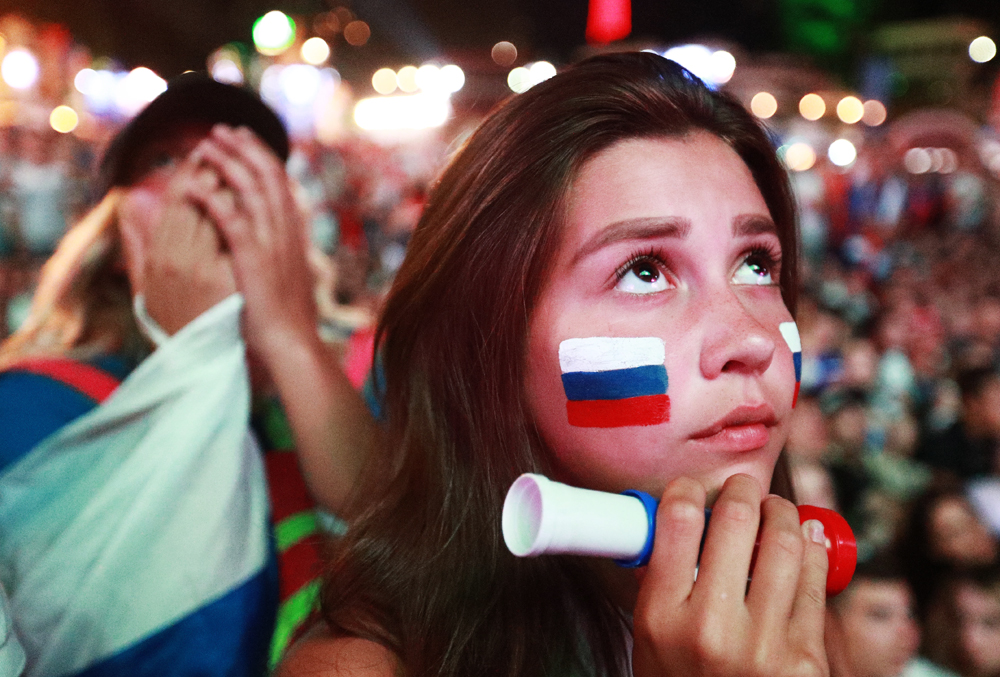 Long before the tears could dry, there were smiles. Smiles turned to grins. And grins to laughter. But the tears – of happiness, a little sorrow and mostly of incredulity — remained, staining the cheeks of a nation through the night. When the first drops were spilled, Ivan Rakitic of Croatia had just knocked Russia out of the World Cup with the final (penalty) kick of the Sochi quarterfinal. Instantly, fans with white-red-blue faces emptied out of bars, pubs, American eateries and mini-marts (such as the one I found myself in) and on to Moscow’s Red Square.

For a few staggering minutes at this plaza, thousands sat on stone ledges or dropped to their knees, in a strange sort of silence peppered only by the sounds of constant snivelling and spitting gargoyles. Then, there were a few stray attempts to channel this uneasy energy into chants of “Ros! Si! Ya!”, but these sparks died without setting a fire. The healing had to come from within and when it did — when it dawned upon the Russians masses what they and their team had achieved and that the yardstick for this achievement had little to do with winning and losing – Red Square, and perhaps all of Russia, experienced a unique party of quiet contentment.

Unlike after Russia’s win against Spain in the Round-of-16 — where all of Moscow exploded into its largest, most spontaneous celebration since September 2, 1945 – there were no blaring horns on the city’s wide, concentric streets. Don’t get me wrong, there were cars alright, stuck in snarls of traffic. But from rolled down windows, passengers waved Russian flags without the noise that usually accompanies this act; men, women and children not hanging out of the vehicle but pressed against their seats and smiling. I noticed the same, indescribable smile all around the centre of Red Square. And on the face of Gennady, a super-market cashier, now seated on the periphery of a fountain, his back drenched by the cascading water.

“I wasn’t much of a football fan before the World Cup started,” Gennady told me, wiping smudged paint from his face. “But now I am. I am a fan of the game. Not because I like the technicalities of the sport. Even basketball is technical and so is ice hockey. I am a fan of football now for what the sport can do. It brought all of us Russians closer to each other. I thought this kind of oneness, of patriotism, happened only during wars, not sports tournaments.”

For the die-hard supporters of the Russian national team, the lowest-ranked nation to ever host a football World Cup, the overwhelming fear before the tournament began was that of the ignominy of a first-round exit; the embarrassment of not being good enough in front of the watching eyes of the world. Those fears gave way to widespread awe as the Sborbaya made the knockout stages first, and then the quarterfinals. And when Mario Fernandes’s 116th minute equaliser pushed Croatia, a far superior team on every count, and the match into a penalty shoot-out, the Russians flocked around every TV set in this country felt a pure, crystallised version of national pride.

The following day, Igor Akinfeev, Russia’s captain, announced that he and his teammates will appear, together, at the FIFA fan-fest in Moscow. His word spread quickly through the city. And on a breezy Sunday afternoon, a great chunk of Moscow found itself under a wooden stage, waiting for its 23 heroes. “I’m here to thank them. I want to thank Akinfeev and the team for what they have done for Russia. For what they have done for all of us,” said a lady in her 70s, screaming into a mic held by a reporter from a news channel.

When the team took the stage, the same lady clasped her bony palms under her chin and wept. Once the players — each of whom got his turn to thank the crowd, thank Russia, for the support – had their say, the Russian football team waved at a sea of people one last time at this World Cup and exited, even as a camera followed them to the parking lot. Here, as watched by many thousands on the fan-fest’s giant screen, the players hugged each other and disappeared into their cars, and out of a fulfilling World Cup campaign.