A Carriage of Shattered Dreams

A 16-hour train ride in Russia with grieving football fans 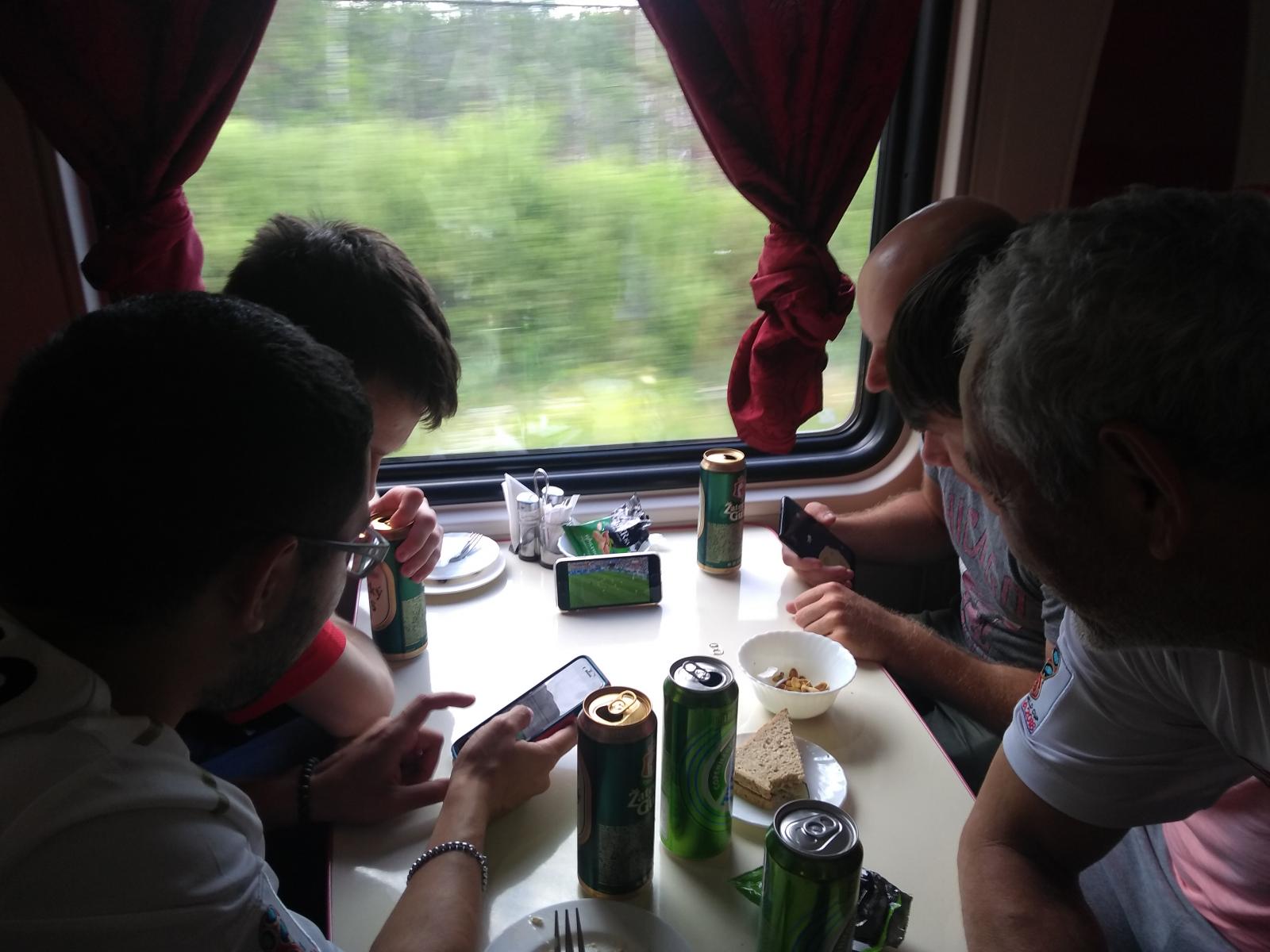 The Russian passengers are breathing easy; the ones who aren’t chain smoking cigarettes by the gangway-connections in any case. The train, from Kazan to Moscow, is due to reach the capital city at 8:45pm on Saturday. And the headlining match of the evening, the quarterfinal showdown between Russia and Croatia, kicks off at 9pm, Moscow standard time. The RZD (Russia’s inter-city train) is seldom late, we’re told, and few of the 734 ‘FIFAtrains’ — added during the course of the World Cup to ferry the millions travelling across these vast lands — have missed a deadline.

The rest of us aren’t quite as relaxed as the Russians. A 16-hour journey is tedious as it is, even without the added stress of travelling alongside mourning Brazilians. Every passenger on this train had tickets to the quarterfinal game the previous night at the Kazan Arena, where Brazil were knocked out of the tournament by Belgium. Half a night since, a majority of these passengers are still draped in their canary yellow jerseys, stained with sweat, tears and beer.

Understandably, they in the No. 10 Neymar uniforms haven’t taken the loss too well. I was in Belo Horizonte when the Selecao were humiliated by Germany in the semifinal of their home World Cup. Yet, this train journey seems more funereal. At least in Brazil four years ago, the pain had fresh air to dissipate into. Here, the pain is palpable, cooped up and festering within stale wagons. Here, the pain seems almost physical.

Demetrius, my top-berth neighbour, is passing through the various stages of grief. He was still drinking when we boarded the train at 4:45am. Then he wept. Then he slurred something about his cats back home in Sao Paulo. Then he blanked out. Now, nearly 12 hours into this train ride, he is upright and clutching his face in his palms, his socks-covered feet dangling without purpose. Demetrius’ emotions need new outlets. He decides to make the England-Sweden match (Saturday’s early evening kick-off) his vent. Only, this train has no wifi.

Other passengers in our third-class coach have concocted similar plans. Watching England, or more specifically, rooting for their loss, is now the train’s prescribed cure. Someone claims that the first-class wagons are equipped with television sets, one in every coupe. No one knows this for sure, but this TV myth has fast become fact. What everyone is most certain of is that third-class passengers are prohibited from entering first and second class wagons. Our access ends at the dining car. Beyond that, the rich folks breathe.

A plan is hatched in the pantry, a wagon-sized border between us plebeians and them privileged. Demetrius says we must storm the carriages with the TVs, knock on each coupe door till a fellow Brazilian, a compadre answers it and welcomes us all in. Fifteen heads nod back, delighted. This is fast beginning to mirror Bong Joon-ho’s dystopian thriller, Snowpiercer. Our plan meets its first hurdle by the pneumatic door leading into second-class. An amused RZD official, a middle-aged Russian woman, is standing in the way of nearly two dozen sour-faced men.

“My brother is in first-class,” a Brasileiro at the front of our line says, pointing in the direction he intends to go. “Sure, but who are they?” the official replies, pointing at us, the blinking cattle-class herd. “We are a lot of brothers,” the Brasileiro deadpans. The official laughs and moves out of our way. Humour, then, is going to unlock all future doors. Wagon ‘5’ Coupe ‘13-21’ is occupied by Brazilians. But they look as amused as the Russian official. “We have a TV,” says Alex, resident of the coupe. “But it has only one channel with preloaded movies.” I take a look. A small door-mounted TV between the top berths is showing a Sergei Eisenstein classic, The General Line.

We return to the pantry, only to find groups of five, in some cases as many as eight, huddled over every dining table. The train has stopped in Vekovka, the small town powering all our phones with 4G. This should’ve been cause for celebration but the news emerging from the phones, and Sochi, is not good. England is up 2-0 against Sweden and the South Americans are terribly unhappy.

Demetrius and I return to our third-class berths. He climbs up to his and instantly hits the bottle. Soon he might be telling me about his cats in Sao Paulo. The Russians, meanwhile, are breathing a little harder than they were before. Their match against Croatia is now just a couple of hours away. I while away my time hoping the hosts don’t lose. I have a 10-hour train journey from Moscow to St. Petersburg on Sunday.