The Indian American community behind ‘Howdy, Modi!’ showcased what unites America and India is greater than what divides it 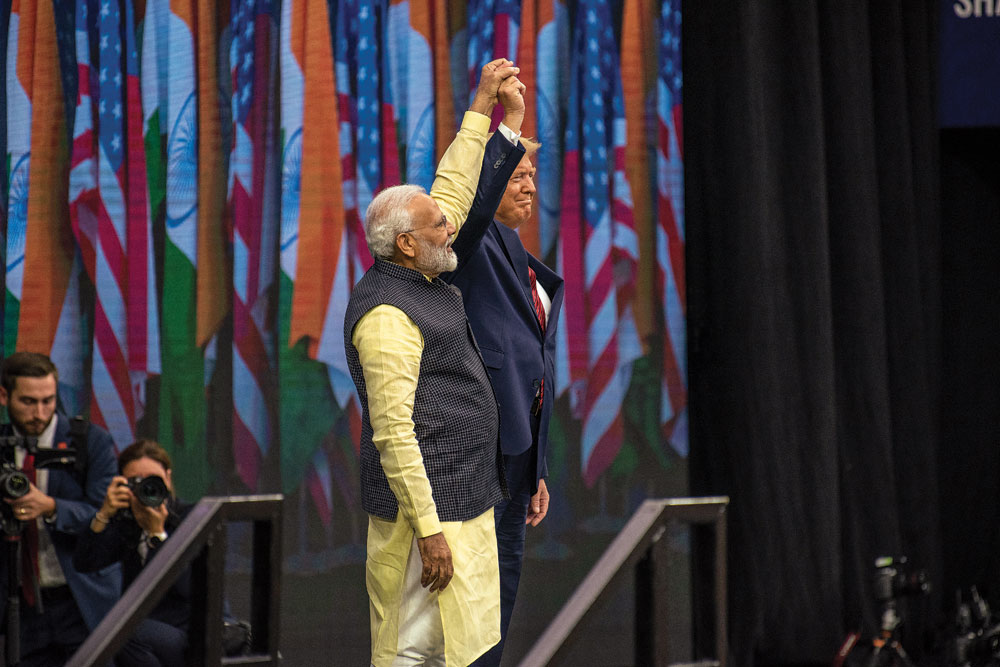 
As the world celebrates Mahatma Gandhi’s 150th birth anniversary, his inspiring words come to mind: “If I have the belief that I can do it, I shall surely acquire the capacity to do it.” For the Indian American community—represented by the Texas India Forum which organized the ‘Howdy, Modi!’ community summit—this belief shone through as it recently put together an unprecedented, historic global event in just eight weeks; a one-of-a-kind community summit that gathered 50,000-plus attendees, over 1,500 volunteers, more than 500 artists and 650 partner organisations who worked on an impossible timeline to make history. The summit brought together on stage an Indian Prime Minister and a US president and marked a turning point in US-India ties.

When Prime Minister Narendra Modi said, “Let me introduce you to my family…”, in the presence of President Donald J Trump of the United States, and stated, “The energy of NRG bears testimony to the growing synergy of India and the United States of America,” it highlighted the capacity and the clout of the Indian American community to bridge the world’s largest and the oldest democracies. No mean feat.

‘Howdy, Modi!’ was not just a display of the goodwill and friendship between two leaders and nations, but also a demonstration of the Indian American community’s coming of age; and their growing political and economic influence in America. It became a visual metaphor for vibrant US-India ties.

“Mr. President, this morning, in Houston, you can hear the heartbeat of this great partnership in this celebration of the world’s two largest democracies. You can feel the strength and depth of human bonds between our two great nations,” said the Indian Prime Minister.

President Trump responded with equal enthusiasm: “I’ve come to express my profound gratitude to the nearly 4 million amazing Indian Americans all across our country. You enrich our culture, you uphold our values, you uplift our communities and you are truly proud to be American. And we are proud to have you as Americans.”

While President Trump stressed the importance of forging strong US-India defense and security partnerships and extended his support for India’s determination to protect its borders and fight terrorism, Republican senators from Texas, John Cornyn and Ted Cruz, and Democratic House Majority Leader Steny Hoyer highlighted India’s rich history, current stature and the tremendous contribution of Indian Americans to the United States. They are the most educated and wealthiest minority group in America and are often dubbed as “model immigrants.” From CEOs to doctors, engineers, astronauts, academics, and artists, the community has firmly established its role in fulfilling the promise of the American dream.

A joint Duke University-UC Berkeley study recently revealed that Indian immigrants have founded more engineering and technology companies from 1995 to 2005 than immigrants from the UK, China, Taiwan, and Japan combined. Indians make up 1 percent of the American population, yet they comprise 8 percent of the founders of high-tech companies—and one-third of all technology startups in Silicon Valley. More than 60 percent of foreign-born scientists and engineers in the United States in 2009 were from Asia, and nearly one-fourth were from India. The impact of the community today is also undoubtedly palpable in American politics. Trump’s presence at the event was as much a recognition of Modi as a global leader as it was an acknowledgement of the importance of the Indian diaspora to US politics.

Today, the rise of the Indian American community is intricately woven into the rise of America. With success comes a responsibility to give back. This is precisely what happened in Houston. The community united, organised and spoke in one voice for a common cause greater than the self. History was made by thousands of volunteers who came together selflessly to serve the cause of peace and democracy. They showcased what unites America and India is greater than what divides it. It was an important statement to make at a time when geopolitical tensions could have blown the wind in a different direction. Instead, they were harnessed to stay the course of liberty and prosperity.

As Mahatma Gandhi once said: “Strength does not come from physical capacity. It comes from an indomitable will. This “will” of the Indian American community to empower people’s diplomacy was at full display at ‘Howdy, Modi!’ and the world stood witness to it.

‘Govt to Purchase $800 Million Worth of Kashmiri Apples’