In India, prostitutes may practise their trade privately but cannot solicit clients in public 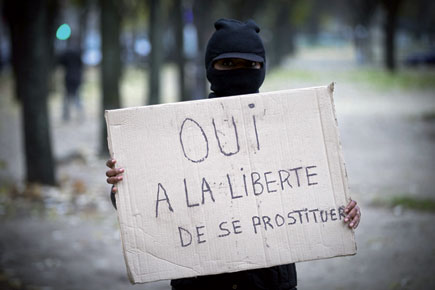 In India, prostitutes may practise their trade privately but cannot solicit clients in public

A new law in France, a country that is okay with nudity on daytime TV and not with hijabs, will soon make paying for sex a crime. The Socialist Party’s women’s minister Najat Vallaud-Belkacem, who has led the motion in the French lower house, said she did not want to live in a society where women had a price.

The law follows in the footsteps of Sweden, Finland and Norway which also criminalise prostitutes’ clients but protect prostitutes. The new law will decriminalise soliciting clients and help those who want a way out. The ban on pimping and brothels will stand.

France, its reputation for sexual tolerance notwithstanding, has had as much of a confused history of regulation and suppression as any other country in the world. For instance, in the early 19th century, Napoleon regulated brothels: women were registered as sex workers and had to submit twice weekly medical examinations.

In India, anti-trafficking laws are designed to combat slavery and trafficking. Prostitutes may practise their trade privately but cannot solicit clients in public. Sex workers are not protected under normal labour laws, but possess the right to voluntary rehabilitation, as also all other rights as Indian citizens.

The nature of prostitution has changed in France, as have the workers’ racial profiles. In 2003, The New York Times reported that 5,619 charges of passive solicitation were made in France, 90 per cent of which were against women, most from poor countries such as Bulgaria and Albania (40 per cent), Nigeria, Sierra Leone and Cameroon (35 per cent). Only 15 per cent were French nationals. This has led to the issue of sexual slavery being conflated with trafficking, which may have pushed the French National Assembly to action.