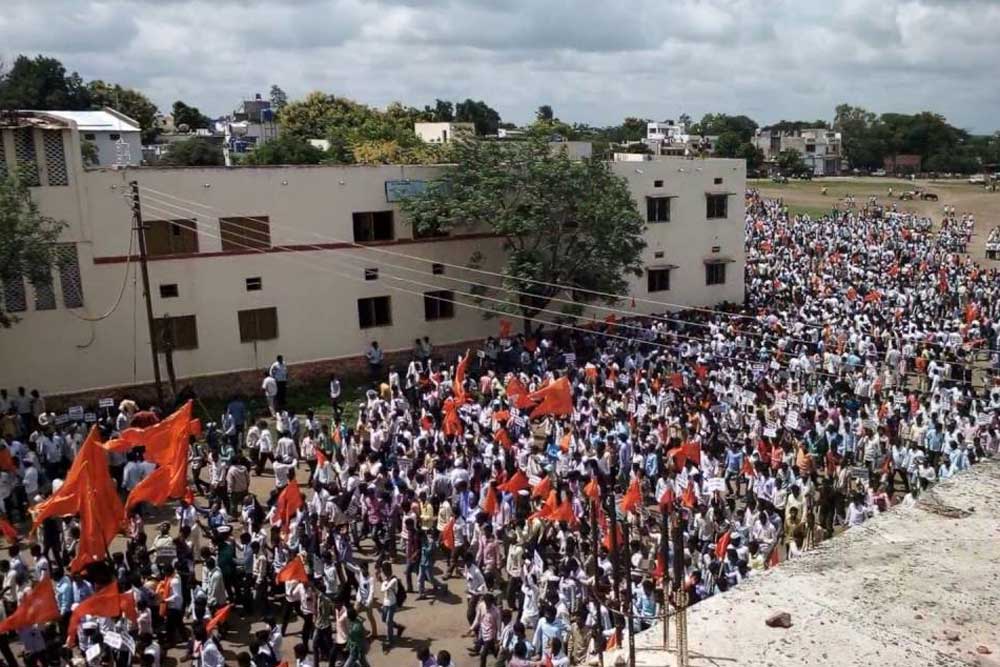 It is a six tier march in Beed, Parbhani. College students are the face of this march. At the back is the clean-up brigade, walking with gigantic garbage bags to collect the litter strewn by those in the tiers before them. All of them march silently with banners, placards and flags of the organisations they belong to.

As they march along, the various fragments—social and political—are united by a single factor, the Maratha pride. Maharashtra’s most populous and politically influential community has taken to the streets in a silent show of strength to take on the Dalit community. They are united and protesting against the brutal gang rape of a minor girl in Khopardi village in Ahmednagar district of Maharashtra in July this year. She was a Maratha.

The rapists—four in number and all belonging to the Dalit community—had stalked the schoolgirl and raped her in the most heinous manner. Newspapers from the district had reported the gory details: flesh from all over her body including her genitals were torn. Some reported that she had been chained too. Her hair had been pulled out, her hands were broken and dislocated from the shoulders, her teeth had been broken. She was strangled to death after the rape.

The vociferous protests in Ahmednagar saw Marathas voicing their anger against the Dalit community. The brutality of the attack shocked the state and galvanised the Marathas into action. Maratha women attacked the rape accused when they were brought to the Ahmednagar court. Had they not been whisked off by the police, the mob would have lynched them. The police have now requested the court to conduct the trial in the jail.

The Marathas are also angry at Nagraj Manjule, producer-director of the Marathi film Sairat (Wild). This film, released in this summer grossed over Rs 100 crore and is listed as the first Marathi film to cross the Rs 50 crore mark. The film is based on a love story between a Maratha girl and a Dalit boy who elope to find their happiness. In real life the female lead of the film, Rinku Rajguru, is a Class X student whose popularity post the release of Sairat is phenomenal, akin to that of Hritik Roshan post Kaho Na Pyaar Hai.

Sairat has made the Marathas angry as they feel it is in bad taste. “Dalit boys are wooing our girls, marrying them and harassing them and it has increased after Sairat,” said Vanmala Shinde, a 45-year old Maratha protestor at the Beed march.

Shinde, a homemaker who lives in a joint family in Pimpalgaon village, Beed, travelled in a tempo to reach the venue of the march. She is not interested in politics; her only interaction with it is casting her vote during elections. But like many others from her village, she decided to participate in the march as she felt “Maratha girls are no longer safe from the Dalit boys”.

Though these incidents took place before the release of Sairat, many of the Maratha protestors still feel Sairat is largely responsible for Dalit youths wooing upper caste Maratha girls.

Like Shinde, thousands of others made the Beed rally a resounding success for the Maratha Kranti Morcha, the united banner of the Marathas for these silent marches.

The Khopardi gang-rape may be a trigger but the anger is directed more at the reservation benefits the Dalit community receives. Marathas say only a small fraction amongst them are rich and influential, the rest are poor and unemployed. Educating their children is a huge financial strain and illiteracy amongst Marathas is on the rise. Those educated say that reservation has rendered them jobless.

“I got 70 per cent in the SSC exams and had to struggle for admissions. But a Dalit with 35 per cent will get admission with ease. I too am poor, my parents cannot barely afford to educate me, so why do I not get benefits like them?” asks Sangeeta Shirke, a 17-year-old who was part of the Parbhani protest march.

Reservation for Marathas was scrapped within a year of its implementation about two years ago. This is at the root of the displeasure behind this large scale protest marches. The demand also encompassed the allegedly growing misuse of the Atrocity Act by the Dalit community. Under the Act, stringent punishment including a prison sentence is handed out to those who hurt the sentiments of a person from the Dalit community through actions or words, or both.

According to Maratha organisations, the maximum number of people jailed under the stringent Atrocity Act are Marathas. The protestors claim they have been falsely implicated to settle scores and demand that the Atrocity Act be repealed. Maratha strongman, former chief minister and ex-Union minister Sharad Pawar too echoed the sentiments of the Marathas. According to him the demand to reconsider the Atrocity Act should be “seriously considered”. Though Pawar did a U-turn on his statement the next day, he had sent a clear message to the Dalit community.

Weeks after the Khopardi gangrape, the first silent march was carried out in Ahmednagar district. The massive turnout saw Dalit leaders adopt a ‘wait and watch’ policy. When the numbers kept rising steadily at Aurangabad, Beed, Parbhani and Latur, the Dalit leaders were forced to acknowledge that the anti-Dalit sentiment was gaining ground. A confederation of Dalit organisations has planned a protest in Delhi later this month to protest the atrocities committed against their community.

Marathas have planned similar rallies in Solapur, Amravati and many other districts of the State. The final rally will be held in Mumbai. Encouraged by the growing response in every rally, the Maratha Kranti Morcha plans to get 2 million protestors on the roads of Mumbai for the culminating rally in September end.

The show of strength in Mumbai will be a politically significant event as it is in this city that the Dalit community’s revered Chaityabhoomi is located. The Maratha march here is aimed at telling the Dalit community of the “capability of Marathas to mobilise their numbers” says political commentator Abhay Mandwekar. It is in Mumbai that Dr Babasaheb Ambedkar—the Father of the Indian Constitution—lived and championed the cause of Dalits. It is also in Mumbai that a grand Ambedkar Memorial will be constructed on a 12-acre plot of the Indu Mills in Dadar at the cost of Rs 425 crore. Prime Minister Narendra Modi is likely to do the bhoomi pujan of the memorial on October 4.

On the other hand, Marathas feel that the ambitious project of the Maharashtra government to construct a 192-meter statue of the Maratha warrior Chhatrapati Shivaji Maharaj mounted on a horse on the Arabian Sea is taking time. This statue—at the cost of Rs 1,900 crore—had run into trouble regarding environment clearances. Many Marathas at the Beed and Parbhani marches felt that the state was prioritising the Ambedkar memorial in order to attract Dalit votes.

Interestingly, though the intent of the Maratha rallies is political the leadership isn’t and is being led by unknown leaders from various parts of Maharashtra. “This is clearly the handiwork of the NCP. They are the force behind these rallies. They are losing ground in the State and this way can consolidate Maratha support back to the party,” said Mandwekar.

Writer and historian Sadanand More feels liberalisation has adversely affected the Maratha community. According to him, Marathas continue to be dependent on agriculture and liberalisation changes in the economic policies has affected them. Others say that fragmentation of their land holdings and rising unemployment amongst have made Marathas economically backward. “They are strong on the social front. Economic backwardness must be a criterion for reservation for them,” says More. “The primary factor of these marches is economical.”

According to Prakash Ambedkar, the Maratha protest is not against Dalits but against the state government. Union Minister of State for Social Justice and Empowerment, Ramdas Athawale, a prominent Dalit leader from Maharashtra has ruled out any change to the Atrocity Act.

“Other castes do not have a legal protection like the Atrocity Act. This needs to be re-examined,” said Radhakrishna Vikhe-Patil, Leader of the Opposition in the State Assembly and a Congress heavyweight from Ahmednagar district.

Marathas and Dalits have had an extremely uneasy relationship which spans back to decades. In fact, the renaming of Marathwada University as the Dr Babasaheb Ambedkar Marathwada University in 1978 led to riots between the two communities. Dalits set up the Namantar Andolan to ensure that the state government did not renege on its promise to rename the University. Following a bitter struggle which lasted for nearly 16 years, the University was finally renamed on 14 January 1994.

Venkatesh Patil, the author of Maratha Arakshan-Bhoomika ani Vaastav feels society gets automatically defensive when it comes to the Dalit community. According to him the Atrocity Act is being grossly misused by Dalits. “Marathas feel stifled. If Maharashtra belongs to Shahu, Phule and Ambedkar, it belongs to Shivaji Maharaj too,” he says.

Marathas form 32 per cent of Maharashtra’s population and includes the various castes and sub-castes under its umbrella. The creamy layer among them holds land, money, political power, educational institutions and industries, while the rest are underprivileged. “Our poor are extremely poor. They need reservation to give them a lift. Why deny them reservation,” says a prominent Maratha minister in the Devendra Fadnavis government. “Dalits keep getting more benefits. There is a need to relook reservation for the Dalits.”

In 2014, the Congress-NCP state government led by Prithviraj Chavan passed a law granting 16 per cent reservation to Marathas in education and employment. This did not infringe on the reservation quota of the Other Backwards Castes (OBC). However, within a year, the Bombay High Court scrapped the Maratha reservation, stating that the community is neither socially nor educationally backward. This long battle of the Maratha demand for reservation, which goes back to the 1980s, is yet to see an end.