The Business of Selling Empowerment 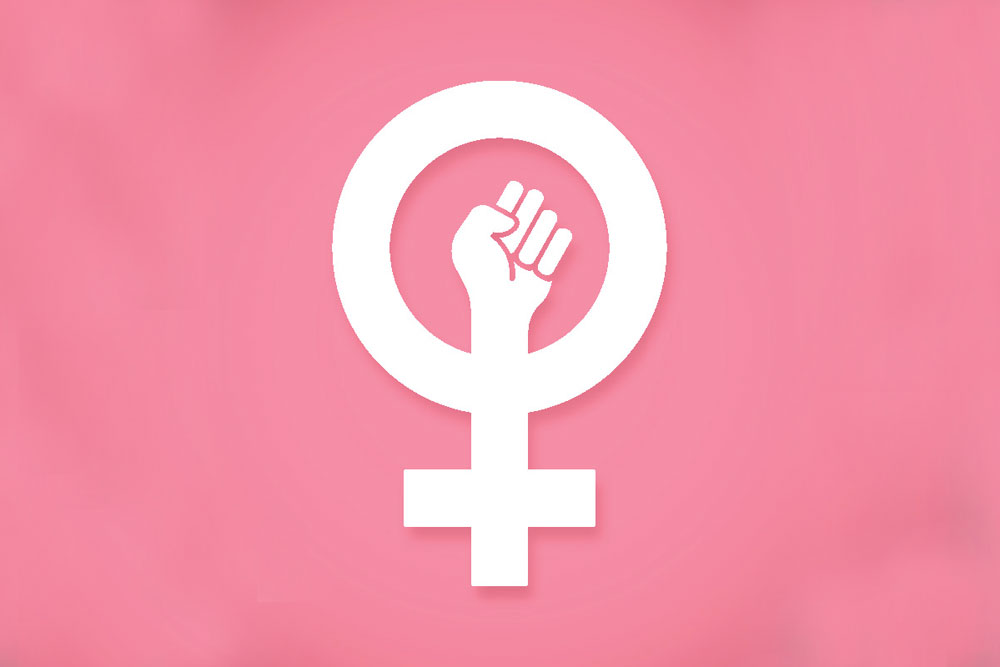 It is three weeks after International Women’s Day, and Hit-and-Fit, a one-floor gym in Delhi’s Geeta Colony, is still to take down the bright pink banner on their doorway that advertises a ‘women’s only special package’. The small print on the banner reads ‘Young ladies: come embrace your womanhood and become stronger than all men #MeTooEmpowered’. Jogesh Patel, the gym manager, eagerly informs me that the banner is pink only because the package was launched on women’s day. “Otherwise we would have made it black or grey, the colours of our company logo. Our owner is female and she wants women to get the body of their dreams,” he explains.

Downstairs, right outside the entrance to the building, is a strip of grass where gym members often go to cool down after class. Patel informs me that some of the women who signed up for the special package are there right now. The women turn out to be two 17-year-old girls who have just given their board exams and chose a membership at Hit-and-Fit as their gift for completing 12 years of education. One of them tells me, “It is easy to be a feminist today. YouTube pe itne feminist channels hain (There are so many feminist channels on YouTube). I try to take as many ‘ladies only’ offers for my clothes, make-up, books. You could say everything I own makes me a feminist.” Her friend is quiet for a moment and then says, “I have to go. My boyfriend is waiting for me.” As she is leaving, she adds, “He is also a feminist. He lets me attend this class.”

Back inside Hit-and-Fit, Patel, gives me the success figures of their ‘Women’s Day Special Campaign’. The package, which offers a 50 per cent discount on an annual membership at the gym, saw membership rates increase by 30 per cent since its launch and was “hugely profitable” to the firm, though he refuses to give me the exact numbers. However, he doesn’t mind sharing their social media statistics. “For just this campaign we had over 200 retweets on Twitter, over 300 shares and likes on Facebook and our video was viewed 25 times on Instagram,” he proudly declares, showing me their social media advertisement which has a blonde-haired woman in a tube top and fitted shorts holding a plank position. The small print reads the same as the pink banner outside. “If you join, you can have abs like her and be a woman of the world,” Patel offers. With five other neighbourhood gyms also offering ‘women special packages’, I imagine he doesn’t want to miss the opportunity of a sale.

IT IS NEITHER NEW nor surprising that Indian brands are using taglines such as ‘empowerment’, ‘girl power’ and ‘womanhood’ to target women consumers. Reports on the growing influence of women in purchasing decisions as well as their own spending power have been doing the rounds for years now. More recently, a survey by the nonprofit Catalyst noted that women controlled $29 trillion in their capacity as consumers and that in India, 44 per cent of household consumption is controlled by women. Another study shows that the number is only set to rise—Boston Consulting Group projects that by 2020 there will be 158 million working women in India with their net earning amounting to around $ 900 billion. However, somewhere in their attempt to sell empowerment, several of these campaigns seem to be endorsing rather than breaking gender stereotypes. Engendered, a gender balance consultancy based in Bengaluru, did a recent study of 80 print and audiovisual advertisements from the Diwali period in 2018 and the findings noted that only 17 of them showed women in non-traditional roles.

In Selling Empowerment: A Critical Analysis of Femvertising, author Alexandra Rae Hunt writes, ‘While previous waves of feminist activism centered on unifying experiences, the third wave largely depends on the beauty of diverse female experiences, a notion that is perpetuated through extensive storytelling and the veneration of intersectionality in grassroots movements, but that is largely unmarketable on behalf of brands. Dove and Always barely scratch the surface of these topics, instead using watered down versions or visuals lacking depth and critique. For example, femvertising will often tout the brand’s dedication to racial diversity without giving voice to the varying experiences intersectionality creates for women of color, women in poverty, and women in the LGBTQ community. Or the commercials will feature women responding freely to a question, but the question is so pointed in an effort to protect and ensure a concise narrative that the exchange falls far short of storytelling.’

“IF THE AIM IS commercial, then the message will obviously be commercial as well,” explains Priya Khanna, a sociology student from Jawaharlal Nehru University. “Especially around festive occasions like Diwali, Holi, Women’s Day, Valentine’s Day, Christmas, New Year, etcetera, you’re bombarded with marketing messages for ‘women specials’. And the products are usually clothes, fitness plans, diet plans, beauty care services or laser treatments. Since the purchasing power of women in India is increasing and female empowerment was a big social movement last year, it is not at all astonishing that advertisers are using it to sell products. What is startling though is how cleverly it is being done. By branding some ‘products’ as ‘female’ and ‘not female’, what is actually being sold to the customer is a stereotype and not empowerment. What #MeToo could not have foreseen is how quickly it would be hijacked by those with more commercial than social interests,” adds Khanna. She also says that there are some advertisements and campaigns that are non-commercial in their nature but serve to increase brand loyalty or product recognition instead. “For example, campaigns on summer schools or social services. Philanthropy has its share of commerce attached to it. By giving to society, you’re also expecting society to be loyal to you, or to see your brand in a certain light,” she explains.

Interestingly, online and SMS femvertising (a term that became hugely popular after SheKnows Media, an American digital media company, started handing out an annual award for pro-female advertisements in 2014) seems to garner more results than their TV or offline counterparts. “It is cheaper to opt for SMS campaigns, small businesses can’t afford TV spots, and with SMS you aren’t subject to as much scrutiny or negative feedback as you are with TV. For online campaigns, you can get a lot of hate but it is free of cost, so its value cancels out its downside,” says Tara Singh, a beauty salon owner from Gurgaon. Having participated in the protests that followed the Delhi gang rape case in 2012 and the #MeToo movement last year, Singh offered a special ‘collagen and vitamin-c enriched facial’ for free to the first three women who entered her shop on Women’s Day this year. “I want to advocate female power,” she says.

“It would be intriguing to conduct research on the impact of femvertising on audiences. Does a consumer genuinely believe that a pink phone or a diamond face lift or an athletic figure or beautiful nails will give them the emancipation that pro-female campaigns pledge?” asks Khanna.

“IT’S  2019 AND IN most parts of India, we still see more men than women out there,” says Shuchi Thakur, executive creative director of advertising firm Wieden + Kennedy Delhi. ‘Exceptions aside, for a variety of reasons our immediate environments have more men than women—from public spaces to forums of opinion to places of work. And because of what exists on ground, in media, we end up creating a consciousness that rallies to the same phenomena. In fact, a lot of the times, we make it worse. We humourise stereotypes, we embolden bad behaviour, we show women playing second fiddle or succumbing to men. What it’s comes to is that mostly, we’re ok with subliminal portrayals of women being objectified, harassed, and even shown as unequals in our everyday,” adds Thakur. She also feels that “strong women” are usually portrayed at select times of the year that “celebrate women” (Women’s Day or Mother’s Day, for example). “So what does this do for men? Nothing really, it’s more of the same old narrative—so much so that when the exception arrives, they find it difficult to understand. What it does for women is worse because the larger narrative around them remains the same. The exception becomes a far-out, unattainable fantasy, one that a majority of women cannot relate to. When we don’t do a better job of the portrayals of women in our everyday, nothing moves forward, not for men and certainly not for women,” says Thakur.

Author Meghna Pant also feels that some Indian advertisements completely fail to do away with existing social biases. She says, “So many ads, in their over-zealous but underwhelmingly unaware efforts, try to sell stereotypes disguised as ‘feminism’. There was a recent ad on insurance where the husband is teaching his wife how to drive, and—of course—she’s floundering, so he wants to protect her by buying insurance so she can be ‘safe’ if he dies. What messaging is this? I’m not even talking about the ad reinforcing the stereotype that women can’t drive but also that a woman can only live off her husband’s insurance. Why reinforce such regressive notions… Entrenched gender biases are totes passé and need to go now. India is moving on, as cutting edge shows on platforms like Netflix highlight, so isn’t it time ads did too?”

Femvertising is a complex modern-day technique and while the majority of its campaigns may fail in the very message they appear to be selling—empowerment—it is still important to take into consideration their potential for change, if they only started to support women and girls outside the limitations of marketing interests and oversimplified feminist jargon. Pant says, “I’ve always been against earmarked holidays for women or anyone else, as I feel we should celebrate women every day, but the truth is also that like a birthday or holiday such days help us to remember and reconcile, to take stock of how far we’ve come and how far we still have to go. I see Women’s Day, for example, as a yearly reminder of society’s progress instead of a commercialised indulgence. And though the transient and capitalistic purpose of such ads is transparent, some ads like that by say Greenply Plywood on female carpenters bring about a new perspective and a new way of thinking.”

While the profits run high, it is unlikely that femvertising in India will turn to a less mercenary approach or realise that ‘empowerment’ isn’t a label that can be applied to any and every product without running the risk of leaving behind a false sense of agency and a commercially-crafted self image among its takers. But there are chances that counter-arguments and critiques via social media and technology will let buyers view femvertising in all its manifestations—as a branding tool, as a philanthropic aid, as an attempt to bring pro-female scripts on air, and as an endless supplier of catchy taglines which may or may not deliver what they promise.