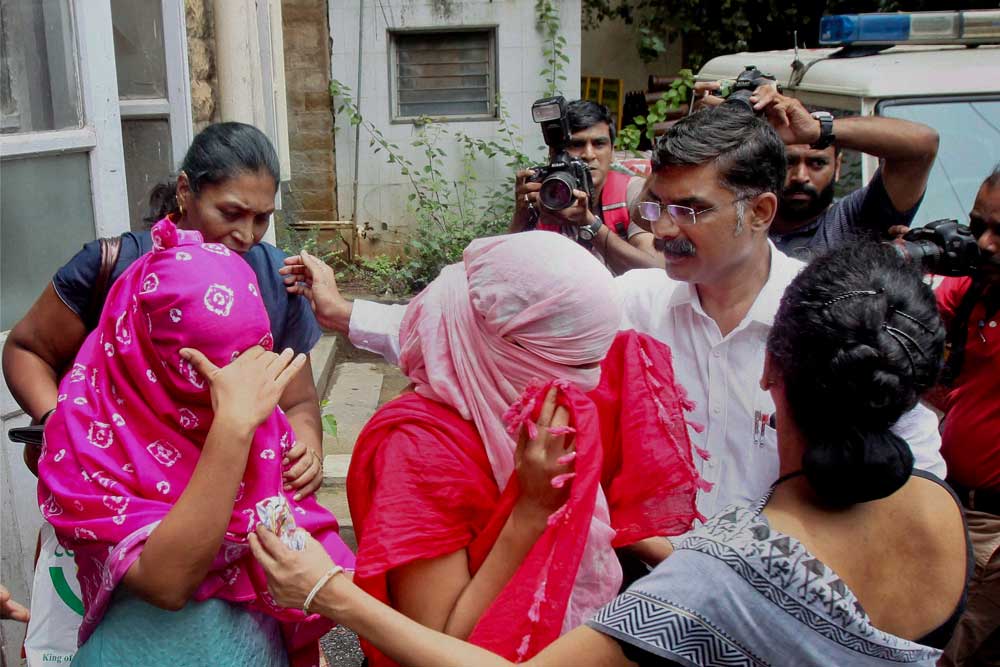 Seated on the ground at the Mumbai Metropolitan Court, three women—two of them clad in saris, the third in a bright salwar kameez—gaze at the proceedings. All three are prisoners brought here from Byculla Women’s Prison for hearings. The two in saris have been arrested for murder, while the third—an educated woman of forty—is here for a cheating case on charges of having assisted a ponzi scheme.

One of the sari-clad women enquires of a female constable sitting next to her whether she will get ‘jameen’ (bail) today. “Tula kaun denaar jameen? Tu murder keli aahe (Who will give you bail? You have committed murder),” replies the constable.

Brought to court at 11 am, three hours have gone by and their case is yet to be called out. Over the next hour or so, all three are done with their court appearances, and as they are being taken back to a police van, one of them says, “I do not want to go to the prison. We are beaten up. There is no food.”

This is a common complaint among the prisoners of Byculla Prison in central Mumbai, but their comfort and convenience are of little interest to anyone outside. That changed when an inmate, Manjula Shetye, was allegedly beaten to death by the jailer and other guards on June 23th. An initial police report mentioned that a laathi had been inserted into her ‘private parts’. However, a second report omits this.

Shetye was reportedly brutalised because three eggs and four paavs (bread) under her watch went missing; the jailer accused her of getting cash for giving extra food to some inmates, which resulted in an argument that culminated in the prisoner being assaulted for her temerity. Outraged, other inmates—including the celebrity murder-accused Indrani Mukherjea—took to rioting in protest. They burnt clothes, books and furniture.

The Mumbai Crime Branch has taken over the probe of Shetye’s death. According to the deputy commissioner of police for Zone III, Akhilesh Singh, the report citing the insertion of a stick is included in the FIR filed against the jailor and five other jail staff.

The treatment meted out to Shetye has brought out into the open the abysmal conditions inside the women’s prison. “The female jail staff are worse than the male. These people use sticks, belts and whatever they can get to beat us. They drag us around by our hair. Those who pay bribes are safe,” says one of the three women on the court premises.

Many inmates have been abandoned by their families and have no means to hire lawyers or complain if mistreated. “They tolerate the dismal conditions in the prison and keep silent if they are beaten. The jail staff do not take on those who are educated, speak English and can stand up for themselves. The ‘drug ladies’ in the prison get a better deal, as the jail staff are aware of their links with big gangsters. If you have the money for bribes, you have a smooth life in jail,” says an activist whose NGO has been working with women prisoners.

The Byculla Women’s Prison houses mostly undertrials—those whose cases are yet to be decided and haven’t been convicted of the crimes they are accused of. The jail routine begins at 5 am, when prisoners are woken up by their barrack wardens and lined up for a headcount. Anyone late is physically punished, says a prison source. At 6 am, the barrack gates are opened and inmates let out into the prison complex for their morning chores. Toilets and bathing cubicles have long winding queues. Breakfast of tea and plain poha–with turmeric the only other ingredient—is at 7 am. Lunch, laid out between 10.30 and 11.45 am, consists of two small chapaatis, a badly cooked vegetable accompaniment, rice and watery daal. The children of inmates are given eggs. Those prisoners who wash utensils get extra food as a reward. Dinner is served between 4.30 to 5.15 pm and food is similar to lunch. Then it’s back to the barracks. It is lights-out at 6.30 pm. Many prisoners end up missing both lunch and dinner on account of court appearances.

The jail’s sanctioned capacity is 262 inmates, but it houses over 350, with 17 of them staying with their children. The barracks are overcrowded and there is little no space within the complex to expand capacity. In the barracks, corners are the most sought after—for these allow prisoners a little extra legroom. There have been bitter fights over this prime property. With overcrowding comes bad hygiene. There is an unsaid rule that no one can comb their hair inside the barracks. Though the rules state that every inmate must be given a bar of bathing soap, another to wash clothes and one more to wash utensils, this is not followed. Many women have to share a single bar of soap. Like convicts, undertrials too can earn daily wages by doing odd jobs like cleaning, sweeping, dusting, teaching, helping cook food and so on at the prison. They are paid Rs 10 for a day’s work, money that can be used to buy items from the prison store. The cash, however, is often held back as a punishment in case an inmate complains about the system. “There is a percentage which has to be paid for everything. We are denied everything if we talk back,” says a prisoner.

Sanitary pads are hard to get. Often, just a single pad is given out for each day of the menstrual period. “Any woman knows that one pad is inadequate for those days. The quality too is very bad. The prison store sells it at exorbitant prices which we cannot afford. Hence we have to depend on what the jail can give us,” says the prisoner. Though resident jail staff within the complex get uninterrupted water supply, those in the barracks must make do with rationed quantities. The shortage leaves many inmates without a bath for days on end, since an unofficial hierarchy of privilege has to be adhered to. Those who are powerful fill buckets and store it for later use, while most go begging for a mugful or two. Scabies, rashes, genital and urinary infections and hair lice are common. Medical help, inmates say, is not easy to get within the prison.

Between 2014 and 2016, four inmates are reported to have died in this prison. Pradip Bhalekar, founder of the NGO Mahatma Gandhi Manav Adhikaar Forum, who has been involved in getting prisoners their rights, has raised questions over these deaths and demanded a CBI investigation of the goings-on in the prison. In defence of the facility, Inspector General of Prisons Rajvardhan Sinha has rubbished claims of torture and brutality at Byculla Women’s Prison. According to him, every death has been investigated by a judicial magistrate.

“The women in the prison are not docile, they can get violent. We too face a threat to our lives every day,” says a jail staffer who is angry about the arrest of six of her colleagues. “My colleagues have been framed,” she says. Meanwhile, extending support to the women prisoners, Ramesh Kadam, a jailed MLA lodged in Byculla’s adjoining men’s prison, has alleged that jail authorities have unleashed a reign of terror within; he wants his statement recorded as a witness in the Shetye death case. In a complaint written to Maharashtra’s Chief Minister, Kadam says prisoners are made to sign on blank sheets of paper which are used to implicate other inmates. Those who complain against the jail system or staff are identified as trouble-makers and beaten up.

Kadam also alleges that in 2001 a female prisoner called Sushma Ramteke, who had been arrested for ties with Naxalites, had been brutally assaulted by male and female guards for speaking about the jail’s corruption, poor food quality, lack of medical facilities and its staff’s aggressive behaviour.

A public interest litigation has been filed in the Bombay High Court on the condition of all prisons in the state by Bhalerao and his lawyer Nitin Satpute. There have been numerous committees set up to study jail conditions, but little has been done about their recommendations.

Shetye’s case, though, could end the apathy.