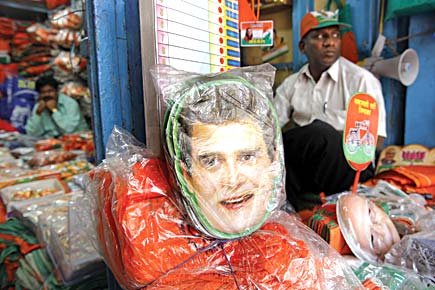 
One of the most indispensable figures in this election is a man called Anil bhai in old Delhi’s Sadar Bazaar. There’s many a shop selling election campaign material here, but workers from every political party head first to Anil’s shop.
The ‘election market’, as it were, is a vibrant, bustling place. Sari manufacturers from textile hubs like Surat print party flags and send them here. Politicians call up and typically say: “My photograph in the middle, Sonia and Manmohan beside me,” and pronto, the stickers are printed. Tailors from the villages and small towns of Uttar Pradesh go from shop to shop, showing samples of their work. And party workers of all hues can be found together at this one place, ordering posters, flags, banners and other campaign material or simply exchanging gossip and loitering around.
However, the Election Commission’s strict rule that flags and posters cannot be put up on public property has meant a decline in business. “Do you find a single flag in your colony?” asks Anil bhai.
But innovation comes easy to the versatile traders here. Those who make socks are now using the material to make wrist bands; those who were making summer caps are making Gandhi topis.
Many of the shops here sell festival wares, colours for Holi, crackers for Diwali, flags for poll season. Perhaps, we should set down the election as another festival then?