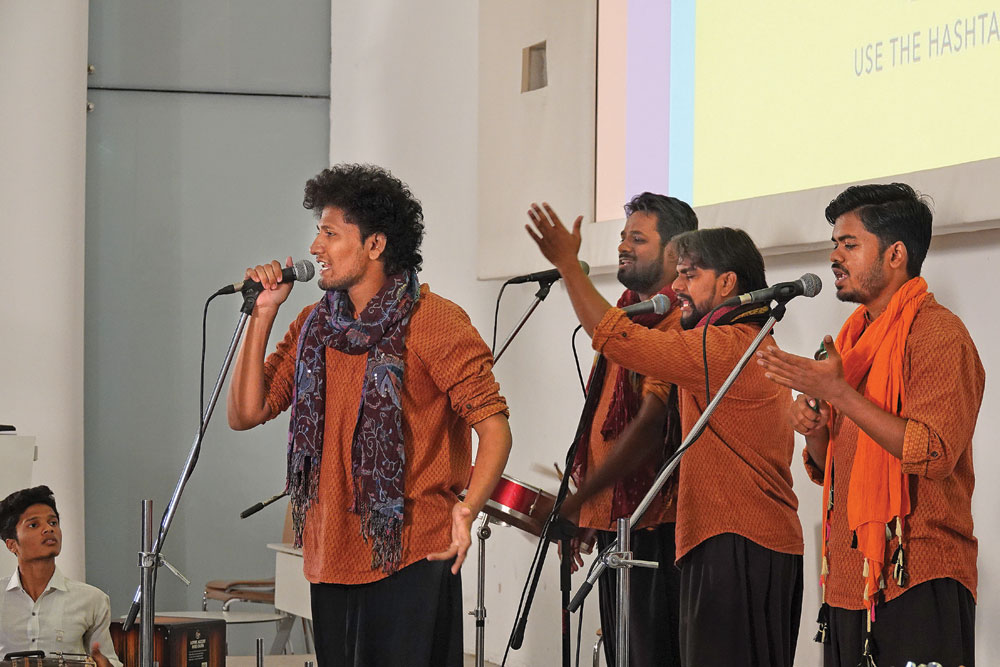 IT STARTS WITH A thump, a big electronic drumbeat that gets louder and quicker as the track progresses. The music goes on, one ear-shattering beat after another, building into a frenetic crescendo. And then the relief as the first words drop. It is a speech picked up from a political rally and played over the track.

There are hundreds of such tracks, made by young DJs in small Indian towns, combining electronic music with political speeches. These tracks will be released online, shared over phones and played during political rallies and religious festivals. Very often these rallies will pass by mosques and Muslim localities and occasionally, they lead to violence.

Various cities have attempted to ban this sort of music from being played during festivals. Last year, for instance, the Vadodara police installed their own music systems in certain communally-sensitive parts to play police-approved devotional music during Ganpati Visarjan.

“We aren’t mixing these songs because we want to,” says Jainendra Kumar. “There is a demand for it. People want to listen to it.” Kumar, who goes by the moniker DJ JK Jhansi, is one of several DJs in Jhansi in Uttar Pradesh. He is in his 20s and is a part of a group of around four DJs who create these tracks. “When you live in small towns and cities, you have to understand, it is not as if you get a lot of different types of work (for DJs). You make tracks that people will want to hear.”

Kumar is hazy in his explanation of who exactly places the order for these tracks. His only explanation is that DJs like him are asked by various local groups to create tracks.

“All I do is find the speeches and film dialogues and play it over a track,” he says. “I have no control over where it is played.”

Music traditionally has rarely featured in discussions around politics in India. This is perhaps understandable. Mainstream music in India is really film music, operating within the straitjacket of commercial considerations.

But as elections near and the country goes through its usual politically polarised moment, musicians are beginning to get involved. Music by young DJs like DJ JK Jhansi that feed into the communal frenzy lies at one end of the spectrum. At the other end are those taking place at concerts and tours. Well-known musicians from the classical music world such as TM Krishna, Bollywood personalities like Vishal Dadlani, Sonu Nigam and Abhijeet to a host of young indie musicians are all picking sides.

One such indie band, the Delhi-based six member group Ska Vengers, sing about a vast number of things, from the Naxalite movement to alleged human rights abuses in Manipur. During the 2014 General Election, they tweaked the popular ska tune, A Message to You, Rudy by the British band The Specials by bringing out their own version, Modi, A Message to You.

“Songs are often capable of saying things in ways that the spoken word can’t,” says Rahul Ram. In his mid-50s now, Ram is a member of Indian Ocean, the band widely recognised as pioneers of fusion rock in India. Five years ago, around the last General Election, Ram became part of another, arguably far more unique band. He teamed up with a lyricist and writer (Varun Grover) and a stand-up comedian (Sanjay Rajoura) to form Aisi Taisi Democracy. In this act, the trio use music and humour to hold forth on a range of political issues. There are songs on TV news coverage of the recent India- Pakistan skirmish, demonetisation and ‘Babri’ dolls.

According to Ram, the three can get away with all this because they play the role of the Shakespearean fool. “The fool says things that nobody else dare(s),” he says, “but that is difficult to take offence to.”

Over the last two years, although the group is active online, the trio have performed few shows. But they will now be embarking on an all-India ‘Aazaadi Tour’. Have they scheduled this to coincide with the General Election? “[It] has more to do with the schedule of our members than the schedule of the Election Commission,” says Ram. “The fact that it’s time for the General Election is a bonus.”

The inflection point in this trend of politically assertive musicians was the 2014 elections. That was when several musicians began to speak their minds openly. A few even stood for elections. Among them, the rotund Bollywood musician, Bappi Lahiri, did not let his inexperience as a politician and the jewellery around his neck weigh him down. He would break into a song every few minutes in his rallies either from his then recent hit Ooh la la from The Dirty Picture or his older hit number, I am a Disco Dancer. Lahiri contested from the small West Bengal city of Serampore on a BJP ticket. When asked about his reason to contest an election, he told the Indian Express, “My songs have kept me alive and kicking in Bollywood for so many years… I can do anything with my songs and this time I want the lotus [BJP’s poll symbol] to bloom with my music.” The lotus did bloom but elsewhere, and Lahiri lost that election.

Musicians were also employed for symbolic purposes. For the 2014 elections, the senior classical vocalist Chhannulal Mishra proposed Narendra Modi’s name for the Varanasi seat. Although in later interviews, he claimed he’d have been willing to propose Sonia Gandhi’s name too had he been requested.

During this period, Dhammaraxit Randive, was still a young man who had recently moved to Mumbai from his hometown of Satara. The son of a lok shahir (people’s poet), a type of lyrical storytelling performance in Maharashtra, Randive was already interested in activism on caste and gender discrimination then.

In the next few years, after the assassination of the rationalists Govind Pansare and Narendra Dabholkar, people he had interacted with as a college student, Randive realised he wanted to use culture as a form of activism.

In 2015, Randive established the troupe Yalgaar Sanskrutik Manch, a 15-member-group which performs across the country, to combat right-wing fundamentalism, and caste and gender discrimination.

A majority of the group are Dalits but there are also several Muslim and upper-caste members. They perform wherever they can, often on their own expenses, in large and small cities, and even on train journeys between venues. There is a need, Ranadive says, for groups such as theirs with a more left- oriented ideology to reclaim cultural spaces.

They are trying to give lok-shahiri a contemporary spin to address more people, using elements foreign to the form such as qawwali and guitars. “You can’t preserve lok-shahiri by keeping it in a museum,” he says. “You have to do things to it so you take your message to a larger audience.” They have been threatened sometimes although it has never escalated into physical violence.

During cultural workshops that they hold, police personnel regularly show up in plain clothes as volunteers. “Every time a new person joins [our group], the police will make it a point to talk to them and jot down their phone number,” he says. But even that they have gotten used to, Ranadive says. “It is a small price to pay for responding to what’s going on in the country currently.”