Doctor with a Big Heart 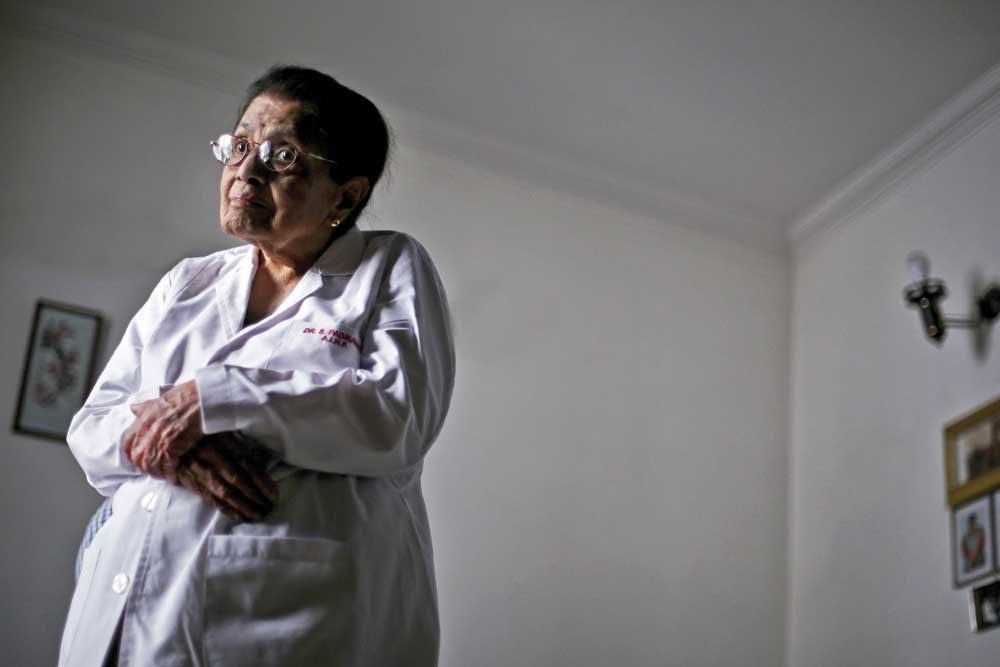 SHE SITS HUNCHED in her chair. Her hair is dyed black; the greying roots reveal their true intent. Her toe nails are painted red. Her walker stands a few feet away. On a Delhi monsoon morning the house seems dark, but one can still decipher the framed certificates and degrees that cover the walls. Everything seems to be meticulously in place. Except for the profusion of flowers. Bouquets overflow and burst from every vase on every surface. The bouquets give it away—the lady in the chair has just celebrated her birthday. And it is not any old birthday. She has just celebrated her 100th birthday. Meet Dr SI Padmavati (Dr Sivaramakrishna Iyer Padmavati), India’s first and oldest woman cardiologist.

These days we are too quick to anoint people as pioneers, but when it comes to Dr Padmavati, she is a forerunner—in the same league as the explorers of yore who went where no one dared before. The true merit of her achievements is that she wears them so lightly.

She was born in Burma in 1917 to a barrister father. She received her MBBS degree from Rangoon Medical College. She later moved to the UK, where she received a Fellowship of the Royal College of Physicians of London, an early accolade which hinted at the successes that were to follow. Her interest in cardiology developed at this time, and she went on study at the Johns Hopkins University and later Harvard Medical School. Returning to India in 1953, she first worked at Lady Hardinge Medical College, and would go on to found the All India Heart Foundation (AIHF) in 1962, and the National Heart Institute (NHI) in 1981. A decade later, she was awarded the Padma Vibhushan.

While this makes for a rather remarkable resume, ask Dr Padmavati about it, and she seems indifferent to her achievements. She is still fatigued by the exertions of her 100th birthday celebration, so we huddle near her, to hear her soft but firm voice. “President Radhakrishnan gave me the Padma Bhushan [in 1967], that is why people chase me,” she says with a smile, “Anything else you want to know?” She says she still sees patients at home and occasionally in the hospital. For her the biggest achievement of the NHI is that nurses prefer to remain in the hospital, instead of migrating to the Middle East.

Though she appears physically frail and strains to hear you, she is as sharp as a whip mentally. She is up to date with the news, and she watches BBC and Rajya Sabha TV. She subscribes to medical journals such as the Lancet, which she reads and then donates to the library at the NHI.

Dr Padmavati might be the oldest woman cardiologist, but she isn’t one to stay stuck in the past. She embraces new technology, whether it is ventilators or stem cell research. She was brought up on the stethoscope, and remembers how her mentor Dr Helen Taussig (the founder of paediatric cardiology, also known for her work on banning thalidomide) would use only that. But today she finds most young doctors are oblivious to its workings, as the Echo test will do the same job, if not better. She keeps an oximeter (used to measure pulse) close at hand, and pins it onto willing fingers. She says, “Sense of touch is not so important anymore.”

Ask her about her past and the lines come with rehearsed ease. “We left Burma for India on the last flight out. The Japanese had landed in Burma. We settled in India. In the US, I worked under Dr Taussig at Johns Hopkins University.”

The reason for Dr Padmavati’s pithy answers is because she has already written her story, in a book titled, My Life and Medicine, which details both her experiences and chronicles the changes in cardiology that she has witnessed over the last 70 years. She says, “I gave it to the publishers one year back. They say they want more words. Where am I to find more words? I wanted Dr [Pranab] Mukherjee to open it. I don’t want the new president to open it. He seems a useless fellow. Dr Mukherjee had stature. America also has a crackpot president. Now if you go to America, you might not be able to come back.”

The book, which she calls “a very good book”, is of special importance to her, as it maps the changes in cardiology. As a student while she never saw heart attacks, she has witnessed a rise in their number over the years. But she believes, “In 50 years, heart diseases will disappear.” She adds, “In the future no one will die before 100. I think we are going to have a good time, even if the world is a mess right now.” This change will come about mainly because of increased awareness and better lifestyle habits; people will walk more and will eat better food.

While Dr Padmavati credits her longevity to genes (her grandmother lived till 103), she herself is an example of healthy living. For 20 years she used to swim daily at the Ford Foundation pool in central Delhi for over half an hour. She stopped going only two years ago, as she found the walk to the pool too arduous. She now sticks to walking in her house, and when time permits, she goes to the “ladies park” close by. “I don’t know what else to tell you,” she says, shaking our hands and flashing us a smile.