Adolf Hitler: Where the Führer Is a Pavement Hero 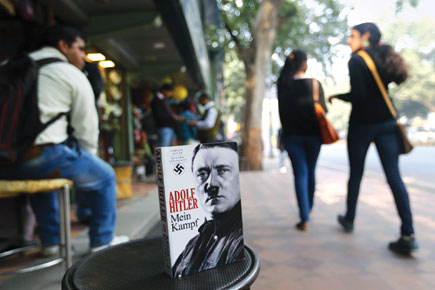 Earlier this year, Adolf Hitler’s infamous Mein Kampf (translated as ‘My Struggle’) was re-published in Germany, amid fierce public debate, for the first time since 1945. The 70-year-long German copyright, owned by the state of Bavaria which had refused to re-publish the book all this while, had run its course.

When the new annotated edition of the two-volume rant, often referred to as ‘the world’s most dangerous book’, was made available, it sold out within a matter of hours. According to the book’s publisher, Institute for Contemporary History, it received an order of 15,000 copies against an initial print run of just 4,000.

While Germany wakes up to the interest in Mein Kampf, here in India it has remained a perennial bestseller for many years, going into several editions for publishing houses like Jaico, the first to publish it here. Even for pavement booksellers, the book remains a great hit. Prakash Pawar, the owner of one of the larger of such bookstalls in Mumbai’s Fort region, says, “Every few years, when somebody wins a Booker prize, or a Chetan Bhagat or Amish Tripathi book comes out, we always stock it. That title will remain a bestseller. But after a few months very few remain interested. But with Mein Kampf, we know it is going to always sell.” Both Pawar and another pavement bookseller in the area, Rajendra Pandey, say that each stall sells an average of about 10 copies every week.

There have been many theories about Mein Kampf’s popularity in India. Some argue that the book is picked up out of curiosity, while others point out how Hitler— often lauded by right-wing leaders like Mumbai’s Bal Thackeray—has come to be viewed as some sort of compelling ‘patriot’. Pawar, it seems, once asked a customer his reason for purchasing the book. “He told me,” he says, “‘Hitler did very bad things. But he was doing it for his country.’”