To Capture a Brothel’s Heart

Photographing the ceilings of the cleanest brothel of Sangli 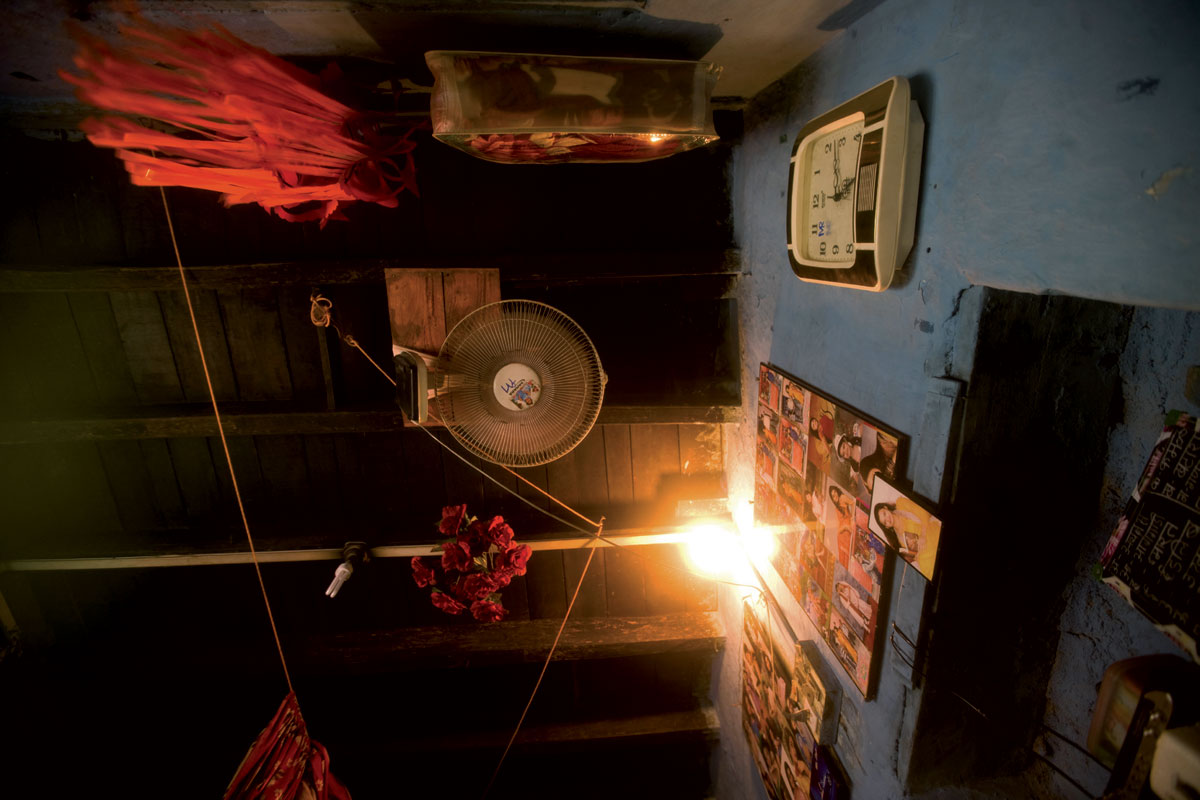 Photographing the ceilings of the cleanest brothel of Sangli


In 2011, I was asked by our editor to take pictures for a story on the cleanest brothel in Sangli, a small town in interior Maharashtra, known for its production of sugar, turmeric and electricity. It is also known among journalists and NGOs as the unofficial HIV capital of the state. The union of those two words—cleanest brothel—baffled me. The story had already been filed, only the pictures had to be done. I boarded a bus from the stand near my house in Bombay, unsure of what to expect after the 11 hour journey.

I reached a day later than I was supposed to and Deepak, a local journalist and the ‘contact’ who was to take me there, had vanished. So I went sightseeing with Uday Deolekar, an old photographer friend from Sangli. Our wandering yielded another story. About Ashok Awati, a bike mechanic on the outskirts of town, who had built his own windmill from bike spare parts and installed it on a eucalyptus tree trunk.

Deolekar happened to know Bandamma, the madam of the brothel, and volunteered to take me there. I saw Deepak there, eating boiled chana on an old bench. He didn’t lift his head and so didn’t register my arrival. To mess with him, I called his number. He looked at his phone, shrugged and disconnected. This was followed by a different kind of speechlessness a few seconds later when we came face to face.

Bandamma’s brothel is at Dussehra Chowk. It’s hard to describe the place. It could pass for a slum settlement in Bombay. An aerial shot would show its twisted plus-sign shape, as if written by a drunk labourer trying to tot up his day’s earnings. The brothel is pink and gets a new coat of paint every year. It is flanked by engineering workshops on one side and the bank of a lake on the other.

Bandamma gave me a free run of the brothel. The women, some young, some old, some with babies, some not, were open to my presence. As the story said, it didn’t really look like a brothel.

The assignment broke many of my assumptions about commercial sex work and women involved in it. I shared dinners and sweets with them. Some women had regular clients, who would buy groceries and daily items for them and it was not ‘all’ about the sex. On a busy Saturday night, a Bengali girl from Calcutta—‘naveen maal’ (new item) is how the men referred to her—had a particularly heavy shift. She entertained 17 clients in the space of the three hours that I observed her. Some would say it is inhuman, but that discussion is best left to another day.

While I was waiting for ‘moments’, Deepak asked me if I wanted to shoot some of the women while they were at it. I refused. He frowned. He asked if that was not what I really wanted. I had to explain that such direct images wouldn’t work for the story. He said this was what all that goras liked to shoot, assuring me that I would not have to pay since I was a local. He gave up eventually, and sped off a few minutes later to cover a local politician’s press conference.

His offer got me thinking about not just the way photographers are perceived but how to not state or shoot the obvious. We owe it to our subjects, who open their doors and lives to us, to find better, sharper ways of telling their stories. Sometimes there is no alternative to stating/ shooting the obvious. But more often than not, we are just unwilling to scratch the surface, to probe. We make images that bring us awards and money but contribute nothing new to the understanding of the subject.

Drawing on my own experience of staring at a ceiling for over seven months while recovering from an accident, I photographed the only thing these women see every day, without fail, with a million thoughts in their head or not—their ceilings.

I began to notice the finer details, some ceilings had a picture of a family member, some had a parent’s ashes hung in a small green pouch, some just a red bulb, some accompanying walls were used to dry clothes, most had posters of actors. Actors photoshopped next to the woman in different poses, superimposed on different backdrops like the Taj, the Gateway of India… The beds were bent in the middle, with stuffy mattresses and pillows in dire need of a wash. To photograph the ceilings, I stuck to my 16mm lens. In a few rooms, I wedged the camera on their pillows on self-timer; in most, I lay down myself. The beds felt hard, very hard on my pampered back. It was tough explaining to everyone what I was doing, so I gave up. I’d just enter a room, ask everyone to vacate after having a cordial chat, lock the door from inside, do my photos and move over to the next.

Communication was an issue since most of the girls were from Karnataka and spoke only Kannada. Bandamma ran Hindi classes for them in the evening. There were many poignant moments during those classes. The one I loved most was when the daughter of one of the women came from school in her uniform and red ribbons and sat next to her mom who was learning to write my name in Hindi on a slate with a broken piece of chalk. The moment that jarred most with me was when a man made an offer to the young Bengali girl while a former sex worker, probably in her sixties, prayed to an idol in the background. Some of those images went with the writer’s story. The series of images of ceilings didn’t work for the story and I chose not to file them at all.

Someday I wish to go back and photograph the rest of the rooms. And sample some more karanjis one of the women gave me on my first day there. In an absolutely partial-to-me world, I’d have loved to have both photographic versions published in the same issue of our magazine. After all, every story does have many sides to it.